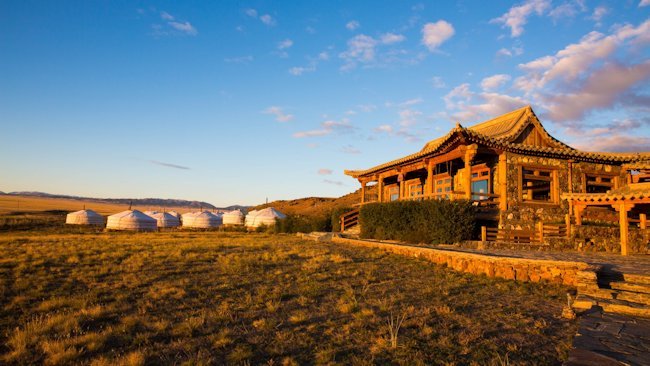 With four different routes, Nomadic Expeditions' Tsar's Gold rail trips offer comfortable 16-day journeys aboard a red velvet-adorned convoy reminiscent of the Tsar era. Two westbound trips to Moscow-one that leaves from Beijing, the other from Ulaanbaatar-feature six departure dates to choose from, spanning May through September, while the eastbound routes out of Moscow offer three departure dates, each in May, June and July. Each train adventure here glides past some of the most awe-inspiring landscapes and hotspots in the world including imposing architectural wonders in downtown Moscow, the Great Wall of China, and Mongolia's vast Gobi Desert. Immersive cultural experiences along the way include traditional demonstrations of Mongolian horsemanship, activities along Lake Baikal, an exploration of the legendary Ming Tombs in Beijing, and a city tour of Yekaterinburg, capital of the Ural Mountains. Nomadic Expeditions' Tsar's Gold trips start at $9,195 per person, double occupancy.

Nomadic Expeditions' Golden Eagle train journeys assure luxury from start to finish. With five different routes, and 16 departures between May and October, travelers on the Golden Eagle can experience opulent quarters and exquisite cuisine while flitting past dramatic landscapes across Siberia and Mongolia. Nomadic Expeditions' The President's Tour: Golden Eagle Eastbound to Mongolia is a particularly enticing expedition. The trip, which takes place July 1-13, 2014, celebrates Golden Eagle's 25th anniversary and invites guests to join Golden Eagle Luxury Trains founder and CEO Tim Littler eastward to Mongolia. Featuring an enhanced program with an extra day exploring Lake Baikal, this once-in-a-lifetime opportunity allows travelers to absorb the panoramas from the perch of their royal blue compartment and take in a traditional Naadam Festival in Ulaanbaatar. Another trip not to miss is the eastbound rail journey to Vladisvotok, which is the longest train trip in the world and enables guests to explore the military port, home to the Russian Navy's Pacific Fleet on the shores of the Sea of Japan. Nomadic Expeditions' Golden Eagle routes start at $15,495 per person, double occupancy.

Both the Tsar's Gold rail trips and the Golden Eagle Luxury Trains offer routes inclusive of a stay in Nomadic Expeditions' Three Camel Lodge in Mongolia, allowing guests to join two unique, bucket-list experiences in one trip. From Three Camel Lodge, guests are invited to explore sand dunes, dramatic canyons and cliffs home to dinosaur fossils, and green valleys in the foothills of the Gobi-Altai Mountains, providing for an immersive experience unavailable elsewhere in the world.