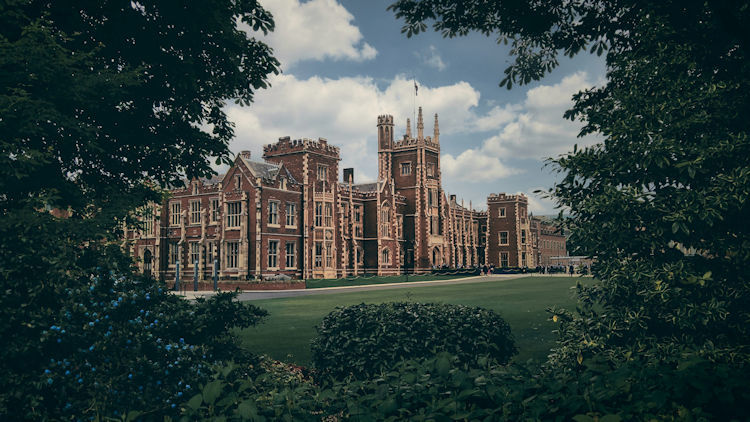 Peering out of my van window, I was happy the rain had stopped. Looking over the meadow, the fog was slowly lifting, and out of this moody, misty atmosphere I saw several large, lumbering images walking the fields. Our van slowed to a stop and as the mist receded, I recognized this ghostly vision to be nothing more exotic than some gorgeous Galloway Belted cows, quite common here in County Down.

Here is a land of intense loveliness - blue mountains, deep forests, misty lakes, and just as it should be - the moors are windswept, the cliffs are craggy and the sea is wild and roiling.  Welcome to Northern Ireland (aka Ulster). It has six counties, 1.8 million people and tourism, technology, and agriculture are the mainstays of its economy.  Weather here can be fickle.  Oh, let’s just tell it like it is: it rains 270 to 290 days a year. In this wee country, about the size of Connecticut and just 100 miles by 100 miles, it’s damp and chill and green all over! Naturally it is this very climate that keeps the Emerald in Isle, and we wouldn’t have it any other way.

The van was taking us to St. Patrick Centre to pay homage to the country’s Patron Saint who didn’t actually drive out all the snakes (myth) but did, in truth, bring Christianity to Ireland. The Centre is located in the medieval town of Downpatrick and has all the information about St. Paddy one would ever need, presented through some quite inventive multi-media exhibits. A mile away is the first church of Ireland, the Down Cathedral, the site where St. Patrick is buried and an essential pilgrimage destination for people from around the world for over 1500 years. 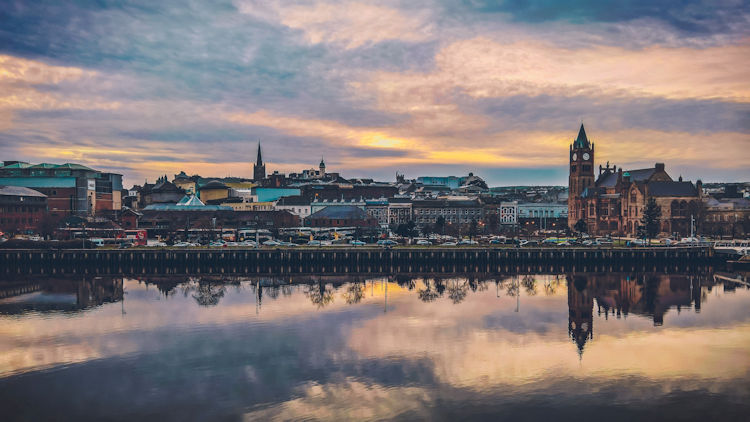 Our own pilgrimage takes us on to Londonderry (aka Derry), rich in cultural and architectural heritage.  Our walking tour encompassed the 17th century Derry City Walls and St. Columb’s Cathedral built between 1614 and 1619.  The walls stand 26 feet high, 30 feet wide and throughout the walk we saw 24 medieval cannons still seeming to stand sentinel, protecting the city from attack by marauding Irish clans. Never breached, the walls remain completely intact and almost perfectly preserved, making Londonderry one of the finest examples of a walled European city.

The next day on to County Antrim to visit the famed Causeway Coastal Route.  The landscape here is astonishing, with patchwork hills, mountain streams and tumbling waterfalls.  Along the coast our driver adeptly maneuvered over a road lined with majestic, heart stopping cliffs and below, golden sands and the Giant’s Causeway, recognized as one of the natural wonders of the world, a UNESCO World Heritage Site.  Jutting into the sea are 40,000 hexagonally-shaped basalt columns formed 60 million years ago from volcanic lava. I stood among the towering tubes of stone musing over a popular legend that an Irish giant named Finn McCool had an altercation with Fingal, a Scottish giant who lived across the water, and began flinging huge clods of earth at him which landed in the sea, forming a causeway so they could meet and have a face-off. The story goes on and on but, suffice it to say, it has a happy ending for dear Finn McCool. Nearby are the ruins of the 16th century Dunluce Castle standing on a 100 foot-high basalt stack. The ruins are breathtaking and even roofless it portrays the air of strength this site commanded and which, before the advent of gunpowder, would have been almost impossible to conquer.

The Glens of Antrim are steeped in myth and legend, especially in fairy-lore.  On a walk-about we came to a stand of Hawthorn trees. Our guide Brendan explained that this area is rife with fairies who are fond of Hawthorn trees and of their own particular hang-out, Fairy Hill. He went on to say: “Woe betide anyone who would dare to cut a Hawthorn down!” Just then a brisk breeze stirred the forest’s leaves, and I believe I saw in the distance a procession of teeny, green-clad souls climbing up Fairy Hill and disappearing down the other side. Imagination? Maybe. Or maybe just Ireland, charming and beguiling as ever.  It was a sweet, cherishable moment that was quickly broken by Brendan saying “I’m told they taste just like chicken.” 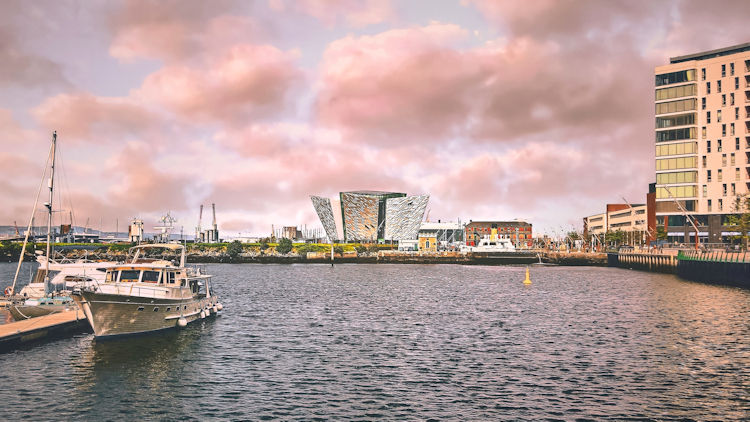 Our journey ended in Belfast, a city of 500,000, replete with history, heritage and tradition. Once the linen capital of the world, the city pulses with energy: quaint cobbled streets, historic pubs, boutique hotels, nightclubs, music and murals - a city of murals, really. They are some of Northern Ireland’s most unique expressions of public art reflecting political and social views while others pay tribute to local heroes. One that I will long remember read: “An eye for an eye, a tooth for a tooth, leaves everyone blind and unable to eat.”

Belfast had the biggest shipyard in the world and it was here in 1912 that the Titanic, the world’s most famous ship since Noah’s Ark, was built.  We saw the dock where she was fitted out and the slip where she was launched, all virtually unchanged since she sailed away. In the centenary year of its sailing, Belfast commenced a mammoth $150M  project  - a museum comprised of 9 galleries which take the visitor through time, telling of Belfast’s shipbuilding boomtown, of those who built the Titanic and those on board her tragic maiden voyage up to present day, showing video footage of where she lies at rest.  The aim of this ambitious project was, in a sense, to bring the Titanic home.

Northern Ireland is a place where myth, magic and mystery live side by side with everyday life.  Our senses were besotted with visions of sheep-strewn meadows, stately horses standing beneath milky skies, and hedgerows of green, gold and copper emerging like ghostly blobs as we traversed narrow lanes. Ireland’s native son, Oscar Wilde, once irreverently said: “The only thing I can’t resist is temptation.”  For me, the temptation to return to Ulster will always be there.