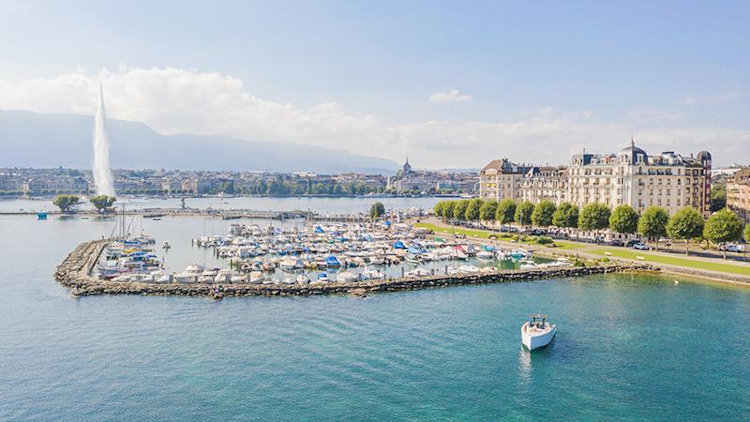 Oetker Collection has announced that the newest addition to its portfolio of “Masterpiece Hotels” is now open: The Woodward in Geneva. With just 26 accommodations, the suite-only hotel is located right on Lake Geneva, with views of the water and Mont Blanc. Dating back to 1901, the post-Haussmann-style building has undergone a renovation led by architect and interior designer Pierre-Yves Rochon, along with BEA SA architects. Highlights include the dining experiences L’Atelier Robuchon and Le Jardinier, and wellness destination Club Woodward, which includes an extensive Guerlain Spa. The Woodward becomes the company’s first in Switzerland.

The Woodward’s 26 suites all have a different design. Twenty-one offer a full lake view, with the jewels in the crown being the Presidential Suite, offering panoramic views from every room, along with a private dining room and loggia, and the Royal Suite, reached by private elevator and designed to resemble a Parisian apartment.

Following seven years as executive chef of L’Atelier Robuchon in Taipei (home to one Michelin star), and leading the restaurant’s openings in Miami, New York and Montreal, Chef Olivier Jean is at the helm of the kitchens at The Woodward. The hotel’s culinary experiences include L’Atelier Robuchon and Le Jardinier, both recipients of Michelin stars at their New York outposts. L’Atelier Robuchon has an open kitchen concept and just 36 guests seated around a counter, as well as two semi-private dining rooms. Le Jardinier, meanwhile, offers guests culinary creations that demonstrate French cooking techniques with a focus on local suppliers and produce sourced no further than 90 miles away. Le Jardinier will be open for breakfast, lunch, afternoon tea and dinner.

The Guerlain Spa at The Woodward is touted by Oetker Collection as Geneva’s “newest, finest wellness address.” The Guerlain Spa—also the first in Switzerland—has six treatment rooms, including one double room, each equipped with a white onyx sink and Italian marble shower. Open to hotel residents and select local members, Club Woodward spans over 13,000 square feet and includes the Guerlain Spa, a fitness center and the longest indoor swimming pool in Geneva. The wellness center also includes a Jacuzzi, two steam rooms, two saunas, a snow shower, an ice bucket shower and two Swedish baths.

Exploring Geneva and Beyond

The bustling, vibrant city offers visitors options such as the market of Plainpalais, a burgeoning cocktail scene and the artisan workshops of Carouge. Watch aficionados should take note: The Patek Philippe Museum is considered one of the world's finest horology museums displaying over five centuries of watchmaking history, (tip: The Woodward concierge can arrange private tours). For those who prefer the outdoors, guests can explore the region by sailing Lake Geneva and traveling to Montreux, stopping at Nyon, Évian-les-Bains and Lausanne. The Woodward can also arrange for private hot air balloon tours to take in the mountains up close and enjoy cheese fondue in the sky—or, for the more daring, an adventure flight that reaches 16,400 feet (oxygen tanks included).

Geneva is also home to an impressive wine region, with two of Switzerland’s most prestigious Grand Cru appellations, Dezaley and Calamin, located in Lavaux. Located in driving distance from Geneva, Lavaux’s terraced vineyards were established by monks during the 12th century, and, accordingly, the region is today a UNESCO World Heritage Site. Good to know: Lavaux is almost as well known for its hiking trails as it is for its wine, and The Woodward suggests the popular six-mile route that takes in Chexbres, Saint-Saphorin, Rivaz and Epesses, stopping off to sample some of the delights in a traditional “pinte vaudoise.”