One for the Bucket List: Ride the Glacier Express in Excellence Class 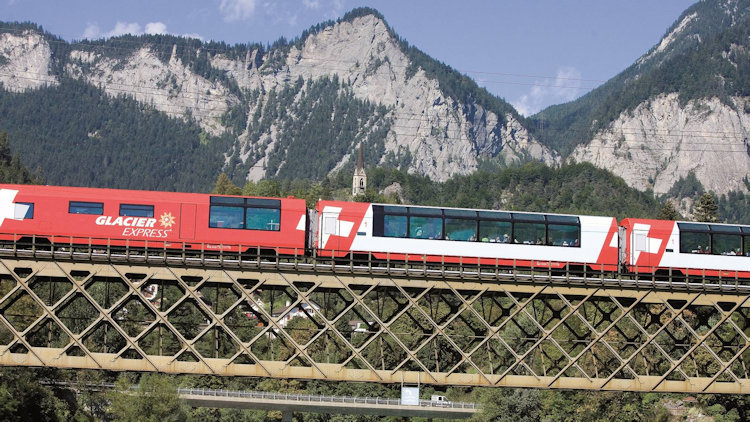 The Glacier Express (www.glacierexpress.ch) has long been considered one of the world’s great train journeys but now, in its first summer season, the introduction of Excellence Class has placed it firmly on the luxury travel bucket list. This new premium class, available to just 20 people per train, offers passengers a truly exceptional experience and breath-taking views as the train wends its way through the Swiss Alps, evoking memories of the golden age of train travel.

The Excellence Class experience starts at the platform, where the red carpet is (literally) rolled out and a concierge checks in passengers, takes their baggage and offers them a glass of Champagne. Once onboard, passengers are waited on hand and foot by the experienced crew, who share anecdotes, point out highlights (such as the Landwasser Viaduct) and serve an exquisite five-course meal of authentic Swiss fare, freshly cooked, along with matching wines, followed later by afternoon tea.

In addition, every passenger is given their own tablet, which is packed with information about the journey and the regions passed through, which can be read from the comfort of their plush leather seat while admiring the unadulterated views from their guaranteed window seat. Alternatively, passengers can stretch their legs and head to the Excellence Class’s well-stocked Glacier Bar, with its over-sized golden compass, which is a source of great amusement when it spins relentless as the train passes through spiralling tunnels.

A seat in this new carriage doesn’t come cheap at CHF420 (in addition to the cost of a first-class ticket), but it is worth it for this once in a lifetime experience.

Dubbed the world’s slowest express train, the Glacier Express takes roughly eight hours to carry passengers across the Swiss Alps, passing through 91 tunnels, over 291 bridges and over a single-gauge track, part of which (“Rhaetian Railway in the Albula/Bernina Landscapes“) was included in the list of UNESCO World Heritage Sites in 2008.

The route takes passengers from the Engadine in eastern Switzerland to the famous Matterhorn in the centre of the country, passing through remote valleys, past sheer rock faces and idyllic mountain villages, through the Rhine Gorge (the Grand Canyon of Switzerland) and scales the highest point of its journey, the Oberalp Pass at 2033 metres above sea level, with ease.

At either end of this train journey stand the dazzling (and legendary) St. Moritz and the equally sophisticated Zermatt, where three of the world’s best hotels have come together to offer the icing on the cake for this bucket list trip: a package offering a night at each.

A night at the iconic Kulm Hotel St. Moritz (www.kulm.com), which its panoramic views over Lake St. Moritz and the Engadine valley, and a night at Mont Cervin Palace (www.montcervinpalace.ch), within touching distance of the Matterhorn, costs from CHF 1020 for two people sharing a double room on a half-board basis (transfers to and from the rail station are complimentary), valid from 21 June to 1 September 2019. Train tickets are not included.

A night at the Grand Hotel Kronenhof (www.kronenhof.com), in the tranquil resort of Pontresina just a few miles from St. Moritz, and a night at Mont Cervin Palace (www.montcervinpalace.ch), within touching distance of the Matterhorn, costs from CHF 975 for two people sharing a double room on a half-board basis (transfers to and from the rail station are complimentary), valid from 14 June to 25 September 2019. Train tickets are not included.