Experience the Palio in Siena with Hotel le Fontanelle 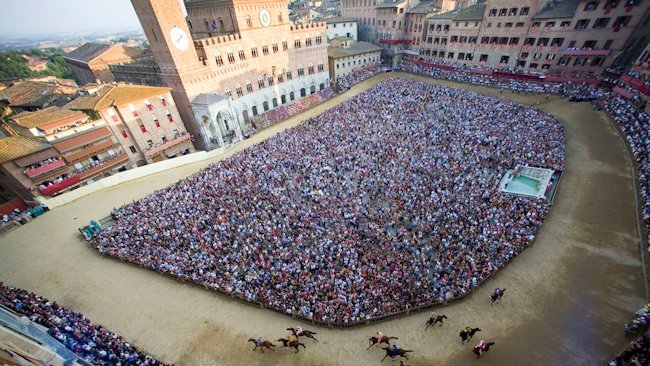 The origins of the Palio date back to the Middle Ages, when public sporting competitions were held in Siena's main square. Since the 14th century, races have been organized by the “contrade”; first with riders on buffalo, and then on donkeys. Originally, there was only one race, on July 2. However, a second competition was added in August to coincide with the festivities surrounding the celebration of the Assumption of Mary on August 1 5th; the second Palio is held on the 16th. In modern times, ten of the 17 contrade are represented by jockeys, decked in their quarter's colors, who have been nominated to compete in the 90-second races. Since the square is hardly as big as modern racing tracks, the turns are treacherous and riders often fall from their horses before completing the three laps.

Competition is intense and contentious among the contrade, the 17 distinct districts which comprise Siena. Each of the contrade is represented by an emblem of an animal or element from nature, originating from the 13th century, which feature prominently on the banners which hang from the buildings in each district. The rivalries between Siena's neighborhoods likely relate to old boundary disputes; at one time, there were as many as 59 contrade. Some districts are official enemies. The Snail and the Tortoise have despised each other for centuries, while the animosity Owl and the Unicorn dates back only as far as the 1950's. These days, the Palio is the last remaining official competition between the contrade, and all of the energy of their citizens is devoted to establishing dominance in one form or another. There is a grand historical procession before the events. During the evening before the race, each contrada prepares a vast feast in its main square, feeding thousands of guests with culinary delights, free-flowing wine and exaggerated tale telling.