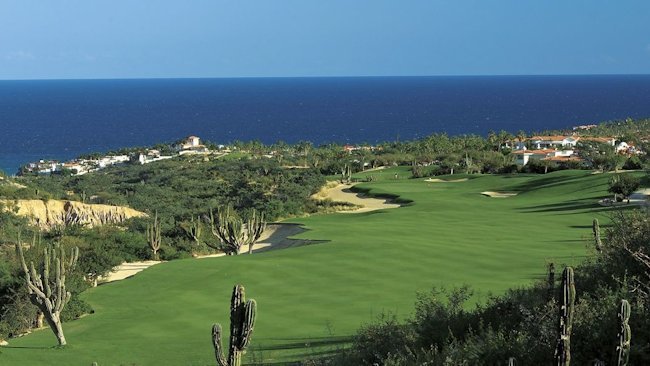 After the course was cleared of wind-blown debris, uprooted trees and fallen cactus, the club used the post-storm closure to refresh the entire facility. For example, the computerized irrigation system, golf cart fleet and course maintenance equipment and outbuildings were upgraded or replaced, as were on-course rest rooms and eroded sections of the golf cart paths. Bunkers were refilled with sand, two irrigation lakes were restored, and all playing surfaces, including tees, greens and fairways, were reconditioned by Troon Golf, which manages the golf course.

According to Jason Ballog, Palmilla's director of golf, the storm thinned out the thick desert forest that encloses the layout, greatly expanding view corridors to the sparkling Sea of Cortes. "From the pictures I've seen, the course looks like it did when it opened 23 years ago," Ballog said.

The first Jack Nicklaus-designed golf course in Latin America, Palmilla, attached to the award-winning One&Only Palmilla resort, is a 27-hole layout etched into a box-shaped canyon framed by tall stony peaks on the outskirts of San Jose del Cabo, a colonial city that dates to 1730. Credited with raising the bar for international-class golf in Mexico, Palmilla was the region's first course to take full advantage of Baja California Sur's unique ocean, mountain and desert environment. It was this compelling trio of elements, along with Cabo's consistently sunny weather, that sparked the imagination of traveling players and gave impetus to future golf developments in Los Cabos.

Palmilla's original 18 (Arroyo and Mountain nines), a stirring target-style test stretched across a desert plateau, skirts canyon-like gulches, cactus-studded hills and huge waste bunkers. Staggered tees present a suitable test for golfers at all ability levels. The club's Ocean nine, added by Nicklaus in 1999, departs the boulder-strewn arroyos and transports players 600 feet from the mountains to the sea.

In addition to the remedial work performed on the golf course, Palmilla's hacienda-style clubhouse was completely redesigned, with a new check-in area and additional retail space in the wood-paneled golf shop.

The club's new food and beverage program, headed by One&Only Palmilla executive chef Larbi Dahrouch, will serve members, resort guests and daily-fee players who account for approximately 30,000 rounds per year at the club. The expanded outdoor seating area at the clubhouse, coupled with a new mesquite grill and a revamped menu, is a fitting 19th Hole companion to One&Only Palmilla, one of the world's top-rated resort hotels.