Time Travel: Visiting the Past in Papua New Guinea 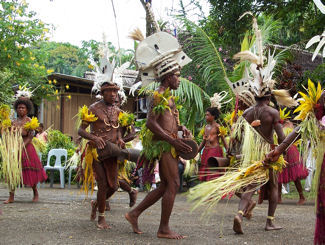 EVEN AMONG VETERAN TRAVELERS, relatively few ever will walk ashore at such remote island nations as Papua New Guinea, the Solomon Islands or the eastern fringes of Indonesia. But those who do may well step off the gangway of a luxury cruise ship.

That's how I got there in February (2009), as part of an 18-day Silversea cruise from Sydney, Australia to Hong Kong. Every port offered us something fresh and unexpected. But outside of Madang, Papua New Guinea, I found the past in a hillside rainforest.

Those few hours at an isolated subsistence village rank among my most memorable travel experiences anywhere, after visiting more than 40 countries on five continents. My companions from the ship seemed to feel much the same, most of them also unusually well-traveled.

Papua New Guinea, or PNG as locals call it, was unlike anything I've known. But without a cruise ship to bring me there, in the middle of the south Pacific, I almost certainly never would have made it.

The contrast between the way of life I observed on PNG and my lifestyle aboard ship couldn't have been more stark. My girlfriend, Gwendolyn, and I stayed in a 1,300-square-foot Royal Suite on the Silver Whisper, as rich and indulgent as a top suite at any five-star hotel. We even had complimentary butler service.

Everything on the voyage was included, from fine liquors, champagne, wine and beer to impeccable laundry service to gratuities. Silversea observes a no-tipping policy. So it was out of this extravagance that we emerged to explore something very different in Papua New Guinea. We left a plush pillow-top king size mattress with a goose down duvet to visit villages where people sleep on palm-frond matts spread atop bamboo floors. Within two hours, we went from broadband Internet aboard ship to a place where residents still communicate with drums.

Our day in Madang started early as perhaps a dozen fellow Silver Whisper passengers packed into a modern air conditioned van for the day. It was a Saturday so Madang's colorful vegetable market was already bustling when we arrived. The stop was brief but Gwendolyn and I had plenty of time to stroll around, chat with locals and admire the tara root and cabbages, corn and ginger.

And betel nuts, of course. The Rodgers and Hammerstein musical, "South Pacific," sure got that right. Everyone chews these small, highly addictive nuts throughout this part of the world. Men, women, children. The nuts grow wild but are sold at markets and streetside for convenience. They’re mixed with mustard and lime powder and chomped into a juice that stains teeth a bloody red.

After the market, our van rumbled over mostly gravel roads cut through dense vegetation for about a half hour, often passing small villages of bamboo huts built on stilts. We saw one woman scrubbing a vegetable in the river, where locals also wash clothes. Finally our van and another one also carrying Silversea passengers turned onto a narrow mud road, grinding the gears as we clambered uphill.

After about 15 minutes of climbing from one hilly plateau to another, we reached the Balina village. To me, it really was another world.

Though the trip was carefully arranged by Silversea, whose ships had visited PNG six times before, I felt as if we had stumbled upon some entirely unfamiliar, primitive culture hidden among the rainforest.

And so we had – if not exactly by way of a stumble. Actually, the villagers were waiting to welcome us with clearly heartfelt handshakes accompanied by flower petals tossed toward our heads. Gwendolyn and I looked at each other with the same expression I noticed on the faces of the other 20 or so passengers – we couldn't stop smiling and couldn't quite believe this was real.

It was. There was nothing artificial, nothing pretend about this village or the people in it. Disney World it was not. I'm not sure they ever had entertained foreign visitors before our arrival. I never learned those details or what kind of arrangement they had struck with the cruise line. I do know we were embraced by some of the most genuine human beings I've met.

They seemed utterly open and guileless. A bit childlike in the best sense. For a while, like everyone else, Gwendolyn and I just wandered around the village freely and talked to anyone we wanted. English is PNG's official language and many residents spoke some of it, though usually quite broken. We soon settled into a conversation with a young man named Mike, who pointed to his slightly tattered Bob Marley t-shirt. "I put on. For today, this shirt – my favorite," he explained proudly.

When we asked, Mike also gave us some background about the Balina village. It was home to 53 people, he said, all members of one family, known as the Hayun clan. Their homes were built from bamboo and sago palms, raised on stilts for air circulation.

Like Mike, most of the Hayun dressed lightly but in modern clothes. We also spotted many other touches of the contemporary world, including metal pots in the kitchen. Later we walked past one bicycle, turned upside down and missing a wheel, as well as a small, battered pickup truck that looked like it would run. This was hardly a population uncontacted by outsiders, though PNG is said to have 44 such tribes remaining – including headhunters.

Despite Balina's flashes of modernity, the overall impression was of stepping back in time. A long step back. The Hayun still beat drums to send messages through the rainforest. Like many PNG villagers, they believed in spirits and animism. The clan lived by gathering the area's abundant wild food and farming a small, hilly patch of land planted with sweet potatoes, taro and the other starchy vegetables that make up the typical diet on Papua New Guinea.

At one point, I asked Mike if his family hunted. He immediately produced a small slingshot from the cloth bag he carried, smiling.

"That's what you hunt with?" I asked. "Yes," he answered, "bats and things." When I expressed surprise that he could kill a darting, fast flying bat with a slingshot, Mike pulled out a stone the size of my index knuckle, aimed carefully and cut down a palm frond some 80 feet away with his weapon. Then he did the same thing again. I no longer doubted his bat-killing skills.

A rainforest walk to search for the famed bird of paradise that's native to this island began just as heavy clouds seriously threatened. For the trek, villagers gave us branches whittled into roughhewn walking sticks. "Rain is soon," predicted the Hayun clan member leading us. He also said it would rain hard but wouldn't last if it was windy.

Only a short way down the trail, his first and second predictions proved right. It rained. Hard. The storm was indeed windy and, as forecast, it ended quickly – in about half an hour.

Waiting it out, we all retreated to the large open building used for cooking meals. To me, this seemed almost better than the hike. It was an opportunity to chat informally with villagers without distractions, all of us trapped together during a powerful thunderstorm. Gwendolyn and I wandered into the rustic kitchen, where coconut shells fueled the stove. I even played the drums for a few minutes with one of the Hayun men, both of us pounding out rhythms against the rain.

This storm delay also brought us the first of many millipede encounters. These thick green insects are, we learned, highly poisonous. They squirt victims with venom, which is powerful enough to kill a child. Once we started looking, we noticed these creatures often while walking. But at least we wore thick shoes. The Hayun walked in thin sandals or barefoot.

After the storm, our hosts decided the rainforest was too treacherous to hike. So most of us explored the large and very muddy village independently now, with clan members pointing out some surprising features. These included a caged cassowary, a huge flightless bird that resembles an ostrich. Common in PNG, the cassowary is prized for feathers and bones used in ceremonial costumes. We also inspected a square grassy pen that, villagers explained, was used for kickboxing practice.

After this leisurely amble, we were led to a small and tidy schoolhouse for lunch. It was a charming place, with two rows of simple wooden tables flanked by wooden benches. Many words in the clan's dialect were written on the blackboard: "Ijana tal. Ija mel. Ija ijani Ali. Ege talna cijed," read four of the sentences.

But there also was a sign handwritten in English on a small sheet of paper that said, "I would rather be a teacher than a great business executive. For he works with facts and figures and lifeless coins, but I work with minds that open, and futures that unfold and principles that grow." The Hayun's commitment to education seemed clear enough.

Our meal was provided by Silversea, tasty and overly generous box lunches eaten as several of the villagers watched curiously from the doorway. This was the only time I felt uncomfortable during our visit, unsure whether offering to share the food might be insulting. I think other passengers felt the same and no one said anything to our hosts – though many of us left unopened packages of food and beverage for any interested residents.

I felt sad when it finally was time to leave Balina, as if departing from friends I likely would never see again. We all shook hands once more and Gwendolyn and I especially took time to say goodbye to Mike. I even gave him my business card with an email address on it but realized this was only a symbolic gesture of friendship. Still, he seemed pleased and we pulled away with lots of waving and appreciative smiles from those of us on the van.

I saw all this as more proof that cruise ship tourism can offer meaningful experiences with people from other cultures. I've never bought into the notion that cruising is necessarily superficial anyway. Some of my best people-moments abroad have come in port during cruises. In St. Petersburg, Russia, I attended a magnificent ballet, then met several locals who bought me vodka and caviar all evening before driving me back to the ship. I've sung with a Danish bachelor party in Copenhagen, danced until 2 a.m with a hip rave crowd in Stockholm and sipped apple tea with carpet merchants in Istanbul.

But Balina is in a class by itself and I can only thank Silversea's exotic itinerary for that. Without an adventurous cruise line, Papua New Guinea almost certainly would have remained for me a curious-sounding destination visited mostly by scientists. Instead, my new friend, Mike, and his family have given PNG a welcoming red smile.