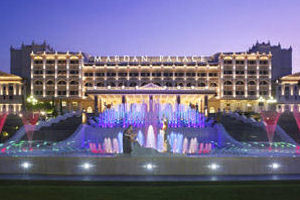 Gondolas will sail guests around the Mediterranean's largest swimming pool, five giant aquariums reflect the Earth's oceans in the hotel's restaurants and spa, Europe's only swimming reef provides a haven for aquatic enthusiasts to explore and a dramatic amphitheatre seating 900 will host entertainment and light shows. The resort also boasts the Mardan Spa, 17 bars and 10 a la carte restaurants including French, Japanese, Russian, Thai and traditional Turkish cuisine.
Like Us
Facebook
Follow Us
Twitter
Follow us
Instagram