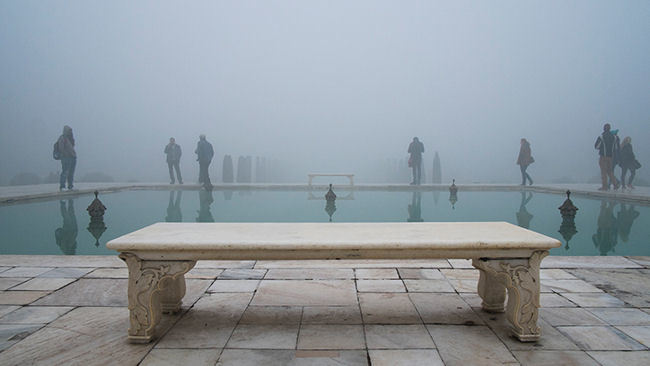 Taken over a period of four years, Volte-face is an invitation to turn around and see a new aspect of the over-photographed sites of the world - to send our gaze elsewhere and to favour the incidental over the monumental.

Much of what is seen when one turns away may initially seem mundane, the antithesis of the famous construction. These landscapes are in every sense over-looked. They emit a quiet history and a subtle narrative. It is easy to forget that these attractions are also places of work, staffed by janitors, security guards, cleaners and office guards, who have a lack of awe born from daily exposure.

Curtis feels that despite the landmark not being present in the photograph, the images are still suffused with the aura of the construction. The camera lens effectively acts as a nodal point and, by giving the photograph the title of the unseen partner, this duality becomes a virtue.

Speaking about his first visit to Giza, Curtis comments, After walking around the base of the tomb I found myself looking back out in the direction I had arrived from, with the pyramid behind me. Intersecting the horizon under a veil of smog lay the city of Giza. Immediately in front of me and under my feet, the sand of the desert was adorned with an assortment of human detritus; litter, pieces of rusted metal, a large rubber washer and a torn hessian sack. Then, in the mid-distance I saw a newly constructed golf course, its fairways an intense green under the late morning sun. I found this visual sandwich of contrasting color, texture and form intriguing not simply for the photograph it made but also because of the oddness of my position; standing at one of the great wonders of the world facing the ‘wrong' way.

Volte-face will be published by Dewi Lewis later this year, featuring an essay by Geoff Dyer.