11 Places in The World With The Best Mountain Bike Trails 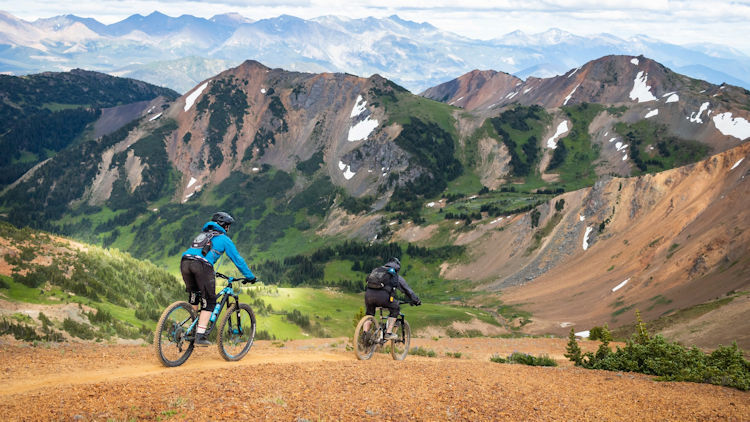 Mountain bike trails are the ultimate joy for any mountain biker who lives for that thrill. But the thrill or the views you get to see while mountain biking isn’t the highlight. Rather, the serenity of the journey and the constant adrenaline rush that it brings.

11 Places in The World With The Best Mountain Bike Trails

Whether you want to take your trail mountain bikes for an exhilarating ride or you want to try extreme downhill, we have some sensational mountain bike trails for you. These top, must-ride routes and locations across nine nations are nothing less than phenomenal.

From the United States to Sweden to the Philippines, we have eleven places in the world with the best mountain bike trails you will ever see.

The route has a tough rating. It involves an eleven-mile, two thousand and eight hundred foot descent towards the Colorado River after a three-mile, nine hundred foot climb from the beginning to the Porcupine Rim.

The trail's breathtaking view of Castle Valley from the summit of the rim is one of its main draws. They also have excellent hiking trails you might want to check out if you love hiking!

Tasmania, an island state south of the continent on Australia's eastern coast, is revealed to be home to a number of the country's best mountain bike riding trails.

The twenty-kilometer Blue Tier route is a component of the Blue Derby trail network. It is situated in a region called a "temperate rainforest" with breathtaking scenery and characteristics ideal for creating top-notch mountain biking trails.

The Smithfield Mountain Bike Park, just on the west side of the town, appears to be the most well-liked among the more than seven hundred kilometers of bike trails in the vicinity, according to the city of Cairns.

Visitors won't be disappointed with the more than sixty kilometers of rainforest paths to discover, ranging from easy to difficult.

Among the top routes in Canada is the seven summits track near Rossland, which has been named as one of the most amazing and top ten routes in the world.

Its approximately thirty-kilometer circuit takes bikers above treeline and across some of North America's finest and most breathtaking alpine vistas.

This eleven-kilometer out-and-back route winds across magnificent wild areas, over scree fields, and down singletrack with shoulders wide enough for two tires.

Since the trail's altitude reaches a maximum of two thousand meters, it is essential to schedule your trip between July and August to guarantee that the path is navigable and free of snowfall.

In France, we suggest the Grand Tour Portes du Soleil, an eighty-kilometer long route that travels via numerous ski slopes and trails.

Along the journey, bikers will be able to sample the paths in a number of bike parks while admiring the breathtaking alpine environment.

Why pick between biking on trails and parks? as one of the most amazing and top routes in France fuses both of these elements!

One of Germany's top-rated mountain biking paths is the Rodalben F Trail.

The Rodalben F route, which is around forty kilometers long and is one of the most well-known, is one of the beautiful mountain biking paths that surround the little town of Rodalben.

More than one hundred sixty kilometers of wooded, purpose-built mountain bike routes can be found in Whakarewarewa Forest, popularly referred to as The Redwoods.

Numerous designated and marked trails that branch off local forest roads are available for bikers of all skill levels to choose from.

One of the GPS excursions that starts in Lenzerheide, Switzerland, and passes via the town of Arosa include the Welschtobel Valley route.

The Welschtobel is not only the nicest route to ride when in Lenzerheide, but it is also, without a doubt, among the most breathtaking places ever seen by a rider.

And if you find the Welschtobel Valley extraordinary and amazing, you can also look into other mountainous places in Switzerland.

The forty-five-kilometer Kinnekulle Trail System on the western side of Sweden is home to beautiful cross-country mountain bike tracks.

In addition, Kinnekulle is also one of the greatest spots in the local area, providing some of the best mounting and descending options in the vicinity.

It's understandable why some refer to this as the mountain bike capital of the Philippines, given that the Timberland network is said to contain approximately a hundred kilometers of paths.

One of the rare locations in the Philippines where riders may find trails designed specifically for mountain bikes is Timberland, which frequently holds competitions as well as mountain bike activities.

The mountain bike trails listed here are something that should not be skipped by adventurous world travelers at all!