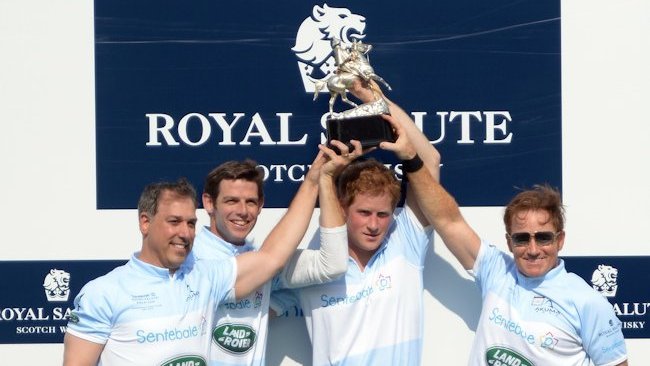 There was Royal jubilation as The Sentebale Land Rover team was victorious in a close match, which saw Prince Harry scoring the winning goal. The Sentebale Land Rover team took home the trophy, which was presented by Christian Porta, Chairman and CEO of Chivas Brothers and top model Karolina Kurkova, with a victory of 4-3 over the St Regis Team. As the final amounts are being tallied at the end of the event, Sentebale have already reached a record breaking target of over 1 million U.S. dollars.

This year's Polo Cup, the third consecutive partnership for Sentebale and Royal Salute, again drew a high profile crowd who travelled from all over the world to gather at the renowned Greenwich Polo Club, owned by businessman, art collector and polo patron, Peter Brant. Distinguished guests included His Grace Torquhil Ian Campbell, the 13th Duke of Argyll.

Speaking of his work for Sentebale, Prince Harry commented: “It is wonderful to be here at Greenwich Polo Club in Connecticut for the Sentebale Royal Salute Polo Cup 2013. The success of our three previous polo events has helped Sentebale make a real difference to the lives of vulnerable children in Lesotho, the Mountain Kingdom of southern Africa.”

Malcolm Borwick, Captain of The Sentebale Land Rover Team and Royal Salute Ambassador commented: “I feel very privileged to be playing polo in support of Sentebale; I admire what the charity is doing for the children of Lesotho. It is a great honour to play alongside my friends here in the USA. The Royal Salute World Polo Series has an ever increasing presence globally and events like this showcase what the brand is doing to raise the international profile of the sport, alongside great causes like Sentebale”.

Christian Porta, Chairman and CEO, Chivas Brothers commented: "Royal Salute is honoured to be partnering with Sentebale for the third year, and to see The Sentebale Land Rover team take the title. Royal Salute has a fantastic presence in the USA, with the Royal Salute Jubilee Cup also played at Greenwich Polo Club in September. The exhibition of skill and craftsmanship we have seen today is a testament to the support and success of polo on the East Coast. We are delighted to extend Royal Salute's commitment to international polo here in America”.