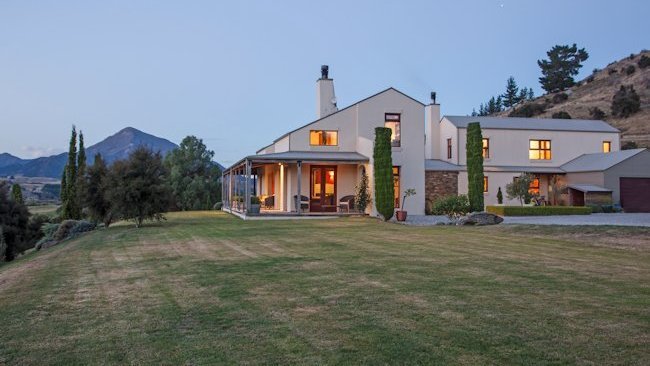 Riverrun – a discreet, intimate luxury property – hosted His Royal Highness Prince Harry and his party for lunch and a relaxing afternoon and evening at the lodge. The Royal party stayed on Monday night before departing Riverrun on Tuesday after breakfast.

The lodge is on the western edge of the Central Otago wine region – famed for its fine pinot noir wines – so the royal group were treated to Mt Difficulty Roaring Meg pinot noir and a Felton Road pinot noir.

After evening appetizers, they went out to the historic Cardrona Hotel for dinner.

Owner Meg Taylor said that Prince Harry was “friendly and relaxed, taking the trouble to thank all the staff before leaving.”

The royal visit had been planned as a relaxing private break in the schedule, she said.

Riverrun was well suited for a royal visit because it was small, friendly and private but still professional and very comfortable. The group staying had appreciated the design of the lodge and reclaimed timber, she said.

“As Wanaka is a very laid-back little resort, it was the perfect destination for the prince to take time out amidst a busy schedule. There were lots of ideas for activities discussed, from mountain biking, to fly fishing, lake fishing, jet boating and helicopter flights but we were also advised that Prince Harry might be happy to just relax.”

“In the end the weather decided it, and the Royal party simply relaxed over a long lunch, and lounged by the fire watching movies and reading. A couple from the royal party took a walk down to the river.”

Prince Harry's first visit to New Zealand has to date seen him take in the pristine shores of New Zealand's most southern community on Stewart island and will conclude in the north among Auckland's urban buzz.

He will have plenty of opportunities to learn about the country's past, present and future with a broad introduction to Kiwi culture and society, which highlights New Zealand's diversity and community.

Other events during The Prince's tour will acknowledge New Zealand's success in the fields of tourism and sport, including meeting several All Blacks and other national sports champions. He also attended an event to showcase New Zealand as the host nation of the forthcoming FIFA U-20 World Cup.

Prince Harry would have heard so many great things about New Zealand, not least from The Duke and Duchess of Cambridge after their tour of the country last year.

There will be a focus on Maori culture and values when His Royal Highness visits Whanganui in the North Island where he will receive a ceremonial welcome on to historic Putiki Marae. After a visit to the marae, the Prince will paddle a traditional Maori waka / canoe on the Whanganui River - a place of deep spiritual significance to the local iwi / tribe.

In Christchurch, His Royal Highness will join Prime Minister John Key to view the city's reconstruction programme following the earthquake of February 2011.

An overview of Prince Harry's schedule in New Zealand as follows:

• Wellington - 9 May: Attend Hurricanes vs Sharks Super 15 Rugby Game at Westpac Stadium.
• Stewart Island – 10- 11 May: Meet the local community and visit Ulva Island, a Department of Conservation open island sanctuary.
• Christchurch – 12 May: Visit to the Quake City Exhibition and Re:Start Mall.
• Linton Military Camp - 13 May: Military activities with the Army, including learning the Army's own Haka.
• Whanganui – 14 May: Welcome on to Putiki Marae. A trip on the Whanganui River on board a Maori waka. Visit to the War Memorial Centre to meet veterans.
• His visit will conclude in New Zealand's main gateway city of Auckland where the prince will be from 15 -16 May.