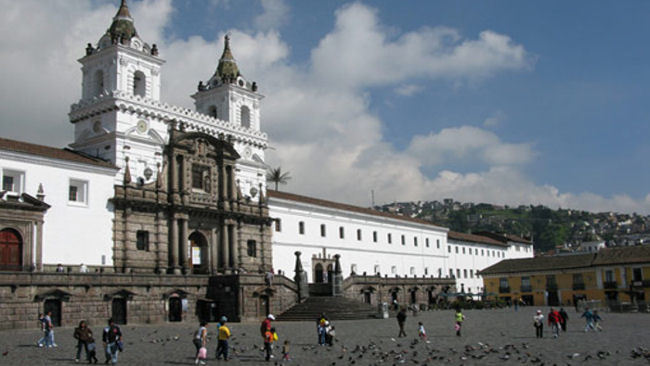 Quito is a 320-acre historic center full of 130 monuments and 5,000 heritage properties. Founded in the 16th century and built on the ruins of an ancient Inca city, Quito sits at over 9,000 feet surrounded by towering Andean volcanoes.

Throughout 2011, its historic theaters, cultural centers, plazas and patios will host exhibitions, plays, musical performances and festivals showcasing Ecuadorian folklore, the city's rich culture, jazz, sacred music and much more. To mark Quito's status as the American Capital of Culture, these events are scheduled: Festival of Sacred Music, April 11 to 24; International Biennale of Guitars, May 19 to 21; International Festival of Singers, June 20 to 26; "The Song of the Festival" Exhibition, June 1 to 15; "Frankenstein, The Musical," July 20 to 26; Exhibition of Manuel Cholango, Aug. 4; Fair of Quito's Sweets and Traditions, Aug. 17 to 20; Ecuador's Jazz Festival, Sept. 12 to 18; International "Music of the World" Festival, Oct. 17 to 23; Urban Art Happenings, November; Tribute to Ecuadorian Artists, December; and Christmas Concert, December.

Additionally, other exhibitions will take place at the Museo de la Ciudad, the Casa de las Artes, the Community Development Center of San Jose de Conocoto, the Humboldt Association, the Interactive Museum of Science and other cultural institutions around the city. The city was chosen by the International Cultural Capitals Bureau (IBOCC), an organization accredited by the Organization of Americans States, the European Parliament and the Latinamerican Parliament. The capital of Ecuador was named UNESCO's first World Heritage site in 1978. For more information, visit www.quito.com.ec.
Like Us
Facebook
Follow Us
Twitter
Follow us
Instagram