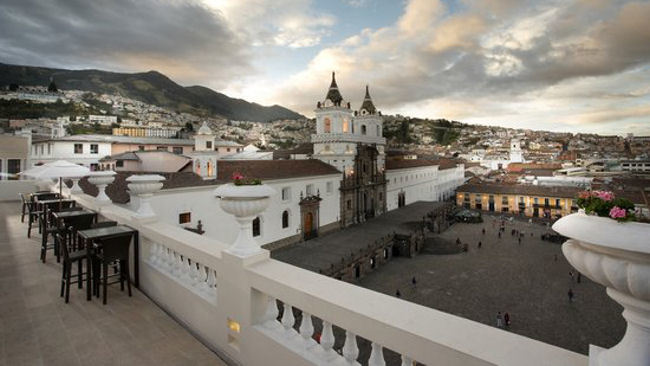 Today, this largest and best-preserved historic center of Latin America is a living museum with 2.2 inhabitants and encompassing one million acres surrounded by the spectacular Andes Mountains.

At 9,200 feet above sea level and stretching for 36 miles on a plateau lined with volcanoes, Quito was the first city ever to be declared a UNESCO World Heritage Site back in 1978 owing to its geographical beauty, 18th century architecture, priceless Colonial treasures and its living traditions and culture. In fact, recently Quito enjoyed the distinction of being named the American Capital of Culture. Yet for too long travelers have bypassed it for that nation's most famous attraction, the nearby Galapagos Islands. Not any longer. Over the last decade, city planners have dedicated themselves to making Quito more inviting by investing

$500 million in improvements. With this major renaissance, the city is now one of the prime travel destinations in the world. 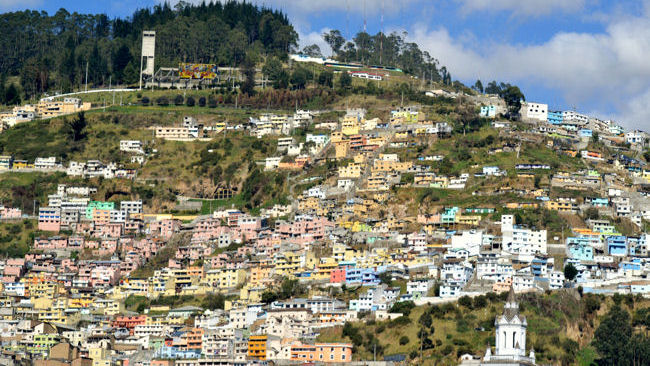 Quito has a rapidly gentrifying Old Town, its neighborhoods bursting with magic, legends and tradition. Our group had an exciting walk-about with our hotel's executive chef, Andres Davila as he demonstrated his daily routine buying the fresh foods that would be served for dinner that evening. We visited tiny shops, food purveyors and artisans that we'd never have seen but for him. We walked the ancient cobblestone streets with people in colorful native dress, all the while being bathed in a most delicious scent that permeated all. The fragrance was familiar yet exotically different. Chef Davila explained that it was a combination of cinnamon, pepper, incense, chamomile, verbena and lemon grass. Whatever…it was wonderful. In Old Town alone there are 16 convents and monasteries and 40 churches including the Church of San Francisco and the famed La Compania Church, a perfect example of Baroque architecture and an important city landmark. Known as the Golden Church, we soon found out why. As we entered, a golden aura seemed to surround us. When our eyes grew accustomed to the dark, we saw gold-leaf covering every inch of La Compania's pillars, arches, alters and domes, an effect that left us slightly giddy and spell-bound. 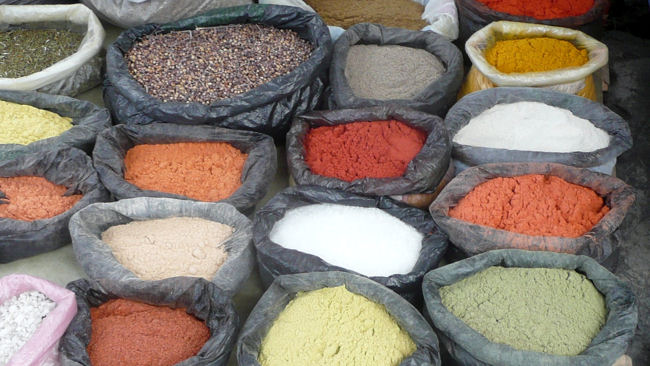 One of my favorite experiences was visiting the Otavalo Indigenous Market with its deep-rooted craft fair tradition and offering an astonishing diversity of products from textiles, carvings, pottery, jewelry, and much more. It is considered the largest indigenous market in the Americas and it was a true feast for the eyes – and for my Nikon! The colors, the people, the costumes, the gaiety. We spent several hours here but it still seemed not nearly enough to absorb all its wonders. However, my turquoise bracelet, dangling banana earrings, and carved Inca face will insure that I'll never forget Otavalo.

Journey to the Center of the Earth 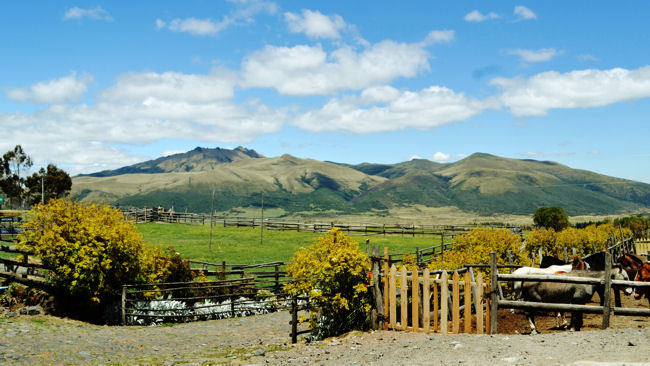 Not. San Antonio de Pichincha, just outside Quito is a park that pays tribute to the Equator, claiming to be the earth's precise midpoint. However, the true Equator has been discovered to be a few hundred feet to the north owing to measuring techniques that, in 1936, were not as accurate as today. No matter. For me, I was delighted to be standing before the Equator monument that's 100 feet high and topped with a globe that's five feet across, convincing myself that I was, at that moment, straddling two hemispheres.

The Subject was Roses

A visit to La Compania, a magical hacienda in the Ecuadorian Highlands region, with lagoons, waterfalls and towering volcanoes, was a sweet treat. This opulent French Neoclassical-style mansion has ceilings, floors, wallpaper, rugs and furniture original to its 19th century beginnings and a permanent rose exhibition. The plantation produces over 3,000 varieties of roses and its excellent quality has captured the attention of experts. Demanding importers consider them to be some of the best. Today, after a mere 10 years of rose production, Ecuador is the world's third most important flower exporter.

A special treat was a railroad journey from Quito to Machachi aboard a quaint steam locomotive train. We chugged through gorgeous countryside - mountains, tunnels, lakes and ravines - to arrive at a lively dance festival: numerous performers, girls, guys, and kids kicking up their heels (actually espadrilles); skirts and boleros in bright, primary colors flowing, and black braids bouncing down their backs. Although gringos among mostly natives, we felt completely at home. The Ecuadorians are a convivial, warm and welcoming people. 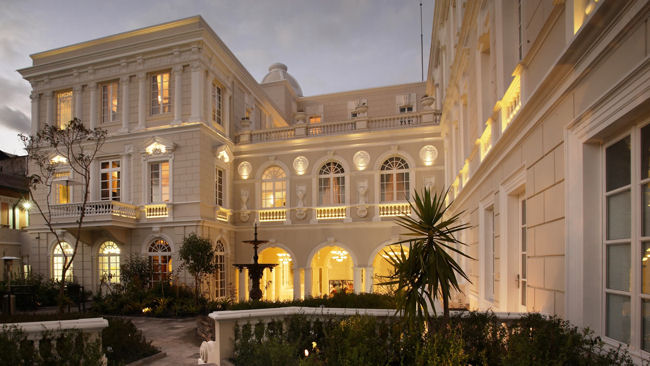 Feeling at home and welcome was due, in no small part, to Casa Gangotena, our hotel throughout this visit. It is a boutique hotel that opened in 2011 after a $10 million transformation from a 1920s mansion. Since its opening, Casa Gangotena has made an outstanding collection of international awards and accolades, including Conde Nast Traveler's “Hot List,” Travel + Leisure's “It List,” and Trip Advisor's Travelers Choice Award as the “Best Hotel in South America.”Its imposing location overlooks Plaza San Francisco whose cobbled square goes back to the days of the Inca in the historic heart of Old Town. Each of its 31 rooms has been restored to its former Art Nouveau elegance: original hand-painted ceilings, friezes, murals, and antique chandeliers. Since 1978, with Quito's World Heritage award, the city has been considered the largest and best preserved Historic Center in the Americas. A few years later, Casa Gangotena was included in Quito's cultural heritage inventory. During my visit, the hotel proved a wonderful base from which to explore the city, as well as a tranquil haven to return to each evening. 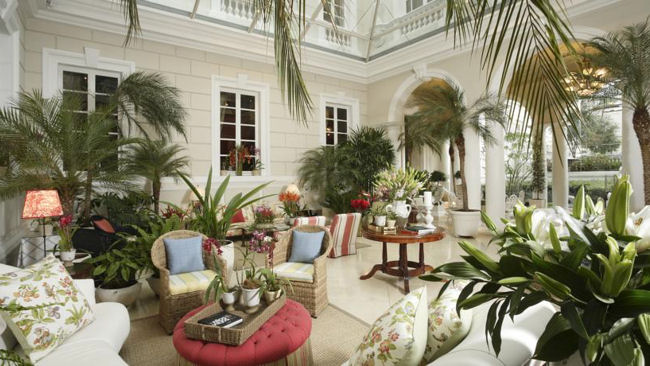 Experiencing Quito is, in a word, a surprise; a revelation from start to finish. From its energetic, newly restored La Ronda district with its tiny, jewel-box arts and crafts shops, to its heart-stopping vistas from on high that rival the Amalfi Coast; from La Mariscal's non-stop party atmosphere to today's artisans and designers creating amazing works inspired by pre-Columbian times, Quito is quixotic, kaleidoscopic and, yes, surprising. It is, in fact, the quintessential travel experience we all seek. 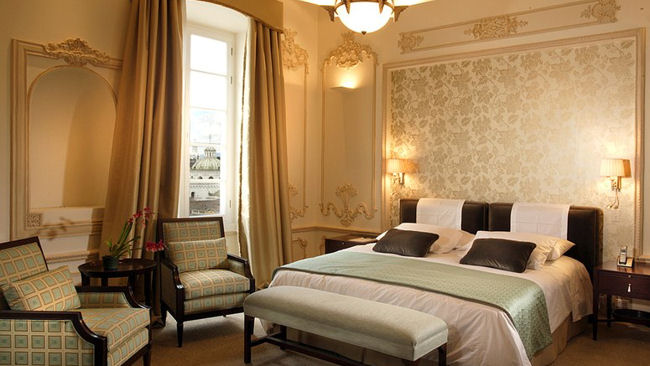