Repurposed Historic Hotels Across the Globe 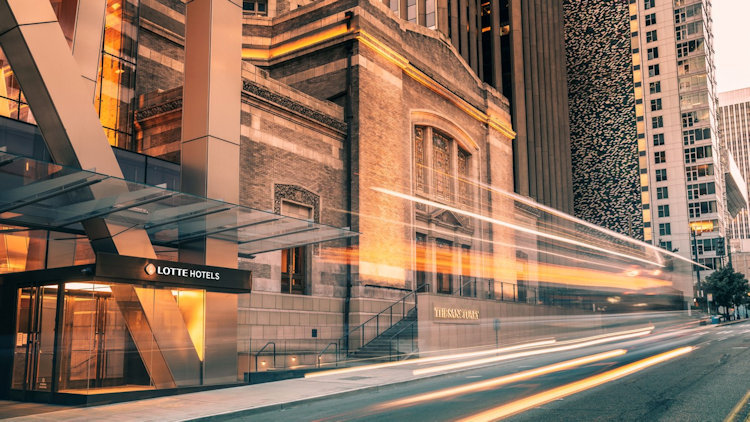 Designed by world-class industrial French designer, Philippe Starck, LOTTE HOTEL SEATTLE is where the present and the past co-exist. Two buildings converge to create a reimagining of Seattle luxury - elegant yet playful, reverent yet modern. The nation’s oldest Beaux-style architectural building, founded in 1908 and previously America’s first United Methodist Church, was beloved by the community and carefully restored to become The Sanctuary, a place for once-in-a-lifetime celebrations and events. The renovated building preserves traditional pieces of the church such as the pipe organ and beautiful stained-glass windows and ceilings offering a view of Seattle’s skyline.  A 44-story tower features a total of 189 artistic and modern guestrooms including 31 suites, a private cocktail lounge and signature restaurant located on the highest floor of the hotel with a spectacular view of Pacific Northwest as well as one-of-a-kind event spaces and world-class facilities from spa to fitness.

Silas Pepoon established a small tavern on this corner in 1773, under the sign of the Red Lion. In 1873, following a succession of owners, the Inn was purchased by Mr. and Mrs. Charles H. Plumb. By 1884, it was known as the Stockbridge House and had been enlarged to accommodate 100 guests. More additions had been made in 1892 and 1894, but a fire destroyed the building on August 31st, 1986. The hotel had been miraculously reopened the following May 1987. In 1986, Stockbridge residents Jack and Jane Fitzpatrick bought the property. Mrs. Fitzpatrick passed away in 2013 and her daughter, Nancy Fitzpatrick and granddaughter, Sarah Eustis, carry on the tradition.

The Porches Inn was the brainchild of international businessman Jack Wadsworth. Wadsworth had a vision – to revitalize the block of seriously run-down but sturdily built, beautifully detailed Victorian row houses that sat vacant across from the museum. Working closely with Nancy Fitzpatrick, owner of The Red Lion Inn, they determined that the space was the perfect location for an inn, and Porches was born. Work on the property was completed in eighteen months. The imaginative renovation included long verandas and bold inside/outside spaces. The original houses were restored and connected to form unique common areas for guests to relax in. The interiors mixed striking, colorful style with an homage to the buildings’ 19th Century heritage. Today, Wadsworth’s ongoing efforts at revitalization continue to change the face and shape of North Adams.

The original structure of what is now called the Seven Hills Inn was once a small farmhouse built in the mid-1700s by early Massachusetts colonists. In 1885, the Robert Chapin family vastly enlarged the dwelling and named the new estate Nowood. It was one of the first grand “Berkshire Cottages.” In 1904, another Berkshire cottage was built next door by a rising novelist, the royalties of her first best-seller used to support the construction. In 1951, New Yorkers, Larry and Sophie Howitt, bought Shipton Court, renamed it Seven Hills and converted the grand mansion into an inn in order to cater to the musicians and music-lovers of Sophie’s beloved Tanglewood. By the Sixties, renovations were completed, and frequent quests included Leonard Bernstein, Beverly Sills, Seiji Ozawa, and Dave Brubeck.

Hammetts Wharf has undergone many transformations, once home to a cargo depot, lumberyard, bank, coal yard, temperance-oriented tea house, laundry, concert venue, ice rink, yacht basin, and most recently, a parking lot, reflects this evolution. Its newest resident, Hammetts Hotel, and its neighbors, will continue to bring new life to the historical sites along this vibrant and thriving waterfront for generations to come.

Nestled in nature with no distractions, The Ranch Malibu spans 200 acres in the Santa Monica Mountains and provides the perfect backdrop to calm the mind, return to nature and focus on mental and physical health goals during The Ranch’s various programs. Set on a historic working ranch three miles above the Pacific Ocean, the sprawling grounds are designed to be rustic, yet refined and feature an open-air kitchen and great room, certified organic garden, pool and Jacuzzi, Buddha Barn and massage “village.”

Lotte New York Palace is one of Manhattan’s most iconic luxury properties that caters to the most discerning of travelers from across the globe. Home to the famed Villard Mansion, a New York City landmark, the historic property boasts a longstanding reputation for exceptional quality and impeccable service. The hotel is located in the heart of Midtown just minutes from some of the city’s most prominent restaurants and attractions, cultural institutions and shopping destinations. Lotte New York Palace gracefully blends the landmark Villard Mansion with a contemporary 55-story tower to offer an unprecedented 909 rooms, each outfitted to reflect an upscale residential feel.

Venturini Baldini was founded in 1976 on a historic estate in the hills between Parma and Reggio Emilia, in the province of Reggio Emilia, Italy. The over 300-acre estate houses a wine vineyard, historic vinegar factory and a resort called Roncolo 1888. Built on Matildic foundations, the villa Roncolo 1888 dates back to the early 16th century, and still recalls the ancient glories of the noble families who called it home, from the Marquises Fontanelli to the Counts Galliani, the Counts Ancini, and finally in the 19th century, the Marquis Manodori. The resort has nine rooms and two 2-bedroom suites that overlook the Italian garden, vineyard, and park of Roncolo.

In the late 60s, the town of La Romana was home to the single largest sugar-producing mill in the world. Owned by the Gulf+Western empire, the mill was a major employer in the area. But executive Alvaro Carta knew there was potential for more in La Romana, so he set out to create a new industry—tourism. Alvaro Carta knew that no Caribbean resort would be complete without a stunning golf course, so he called in the best of the best, Pete Dye. After searching the nearby countryside for the perfect location to build the course, Pete Dye was inspired by the sweeping views and stunning coastline near the sugar mill. Over the next year, more than 300 Dominican workers hand-carved a stunning golf course from the rugged coral landscape to bring Pete Dye’s vision to life. In 1974, The CASA DE CAMPO® resort opened as an executive retreat for Gulf+Western employees.