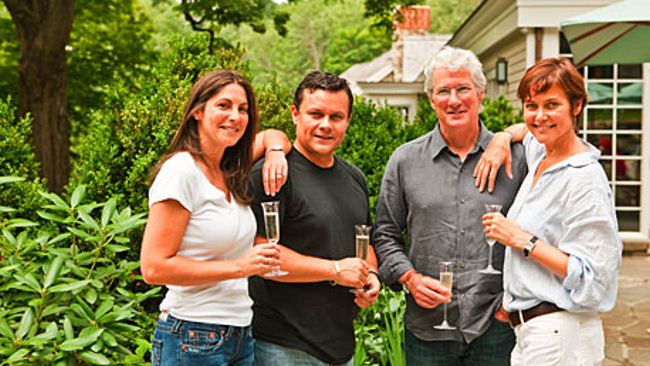 The Bedford Post, located an hour north of New York City, also was named a new member of the prestigious hospitality Association.

Gere, known for such movies as Pretty Woman and Chicago, along with his wife, Carey Lowell, and their business partner, Russell Hernandez, undertook the restoration project of the property as an act of preservation in order to provide a gathering place for his local community and lovingly transformed it into a picturesque inn with two restaurants and a yoga loft.

The Bedford Post is one of 36 new members that were approved after a rigorous selection process, bringing the membership of the organization to more than 500 hotels and restaurants in nearly 60 countries. The 2011 Guide includes six new destinations: Vanuatu, Estonia, Laos, Sri Lanka, Chile and Hong Kong.

Each establishment, whether historic or contemporary, located in the city or the countryside, is individually owned and reflects its local culture in architecture, cuisine and interiors. The properties, with an average of 30 rooms, are often family enterprises, and each convey the innkeeper’s character and personality.

Gere embodies the hospitality, passion and personal generosity of the Relais & Châteaux family of innkeepers. In his forward to the eagerly anticipated 2011 Relais & Châteaux Guide, he notes: "In my long career, I’ve played many challenging and demanding characters, but believe me, none more so than my real life role as innkeeper. We share a kindred spirit with the other Relais & Châteaux innkeepers: a genuine commitment to serve, a rather insane attention to detail, a passion for beauty in all its forms and a personal aspiration to make our world a little better for us having been here."

Commenting on Gere's role as Ambassador, Jaume Tàpies, International President of Relais & Châteaux, declared, "It is an absolute honor to welcome Mr. Gere as the new 2011 Relais & Châteaux Ambassador. Not only is he one of Hollywood’s most admired actors, he is the quintessential innkeeper whose personal journey to revive and maintain a historic property is an exceptional example of the passion that binds Relais & Châteaux together."

The Jefferson Hotel, an urban oasis in Washington, D.C., that boasts a dumbwaiter fashioned from Thomas Jefferson’s own invention that conveys wine from the cellar to the private dining room.

In addition to the new member hotels and restaurants, Christopher Kostow, chef at Meadowood Napa Valley, was named a Grand Chef Relais & Châteaux. Kostow has helped to establish Meadowood Napa Valley as a California Mecca for creative, elegant and dynamic cuisine. At 34, he is the youngest chef to receive three Michelin stars, and only the second American-born chef to earn this distinction.