Riding the Wind: How Kiteboarding is Gaining Popularity Among Adventurers 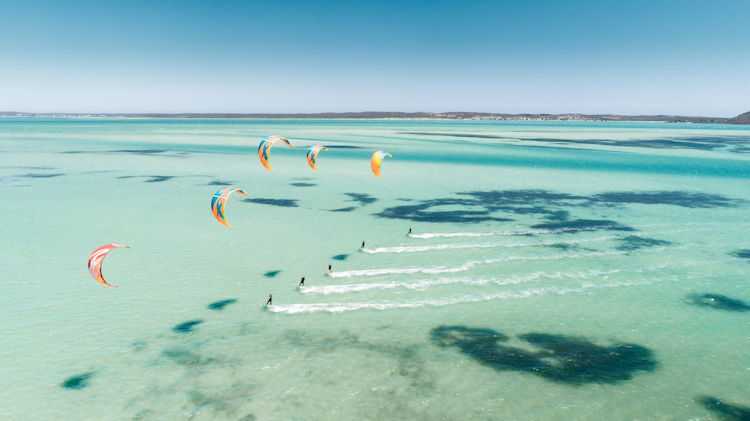 Known by enthusiasts as an aquatic and athletic challenge, kiteboarding has quickly joined the ranks as one of the world’s most popular adventure sports, although it’s been around as a recreational activity since the 1970s.

In basic terminology, kiteboarding (also known as kitesurfing) is about riding and gliding across the water while holding onto a large kite that is powered by the wind. The kite is controlled through the bar and lines that connect to the surfer’s harness, which is worn around their midsection.  There are a variety of ways to participate in this sport: from freestyle to speed kitesurfing; to course racing and wakestyle kitesurfing; to simply kitesurfing in the waves, and the sport has certainly gained the attention of those who are seeking adventure.

“The appeal of it is it’s more independent than sailing, and has a tremendous amount more power if you want that,” according to kiteboarding instructor Dave Johnson. “The best way to describe it is it’s as if you have superpowers. Some people describe it as like wakeboarding behind a helicopter.”

Perhaps it’s the exhilarating rush that makes the challenge of kiteboarding so popular, or the feeling of the wind flowing through your hair, but one thing’s for certain, the sport has turned many entrepreneurs and business executives into kiteboarding enthusiasts.

Venture capitalist Bill Tai, who is an avid kitesurfer himself, tries to explain the sport’s appeal.  “When a CEO that’s used to living a life full of that needs a little bit of a respite, it’s very hard for that person just to sit on a beach and do nothing for a couple of days. Kitesurfing is exhilarating, and it’s a sport that will feel very familiar because there’s a complex set of variables,” says Tai.

Greg Boland, who is no stranger to taking risks (his signature investment style consists of taking ambitious positions in troubled companies) is the CEO and Founder of alternative asset management firm, West Face Capital Inc. in Toronto.  He agrees and even goes as far as comparing kiteboarding to making decisions in the executive suite.

“In kiteboarding, you’re regularly making decisions and adapting to new situations, which is often what you do when you’re making investment decisions or running a company,” Boland comments.

There may also be science to back up Boland’s claim. According to psychologists, “the mental capacity to accurately assess risk and handle scary situations without panicking is something that’s prevalent in most action sports enthusiasts.”

“As an executive, you often have to keep calm under stressful situations. The same can be said about kiteboarding -- you need to be able to navigate through learning when to pump up your kite and launch it in gusty, too light or inconsistent conditions,” explains Greg Boland.

In fact, it may be safe to assume that people who participate in action sports like kiteboarding handle fear differently. There are other qualities, as well, where there’s crossover between kitesurfers and successful executives.

Psychologist Dr. Brymer notes: “They aren’t limited by artificial rules and regulations, or by environmental boundaries like most traditional sports are.”

Another reason adventurers are taking to kiteboarding?  It isn’t just limited to the ocean -- the sport can also be enjoyed on rivers, lakes, and lagoons, and it is also increasingly popular on the snow slopes.  Snowkiting is an alternative winter sport for anyone who enjoys downhill skiing, snowboarding, or kiteboarding.

The best way to learn snowkiting is to practice the same techniques used in kiteboarding.  An easier alternative to water kiteboarding, snowkiting doesn’t involve fighting waves or trying to stand up on a board in the water.

Boland notes, “Serious downhill skiers enjoy the fact that they don't need to drive to a resort and buy a lift ticket every time they want to go out and ride. That’s because they know how versatile and enjoyable snowkiting can be.”

Ultimately, executives like Greg Boland, Bill Tai and everyone else who loves the sport believe kiteboarding is a great network opportunity.  “It’s sort of a self-selecting group. A lot of entrepreneurs who are out there hustling and trying to get their business off the ground are out there talking to other entrepreneurs.”

Whatever the reason may be, kiteboarding (and its variations) will continue to deliver adventure across the globe.