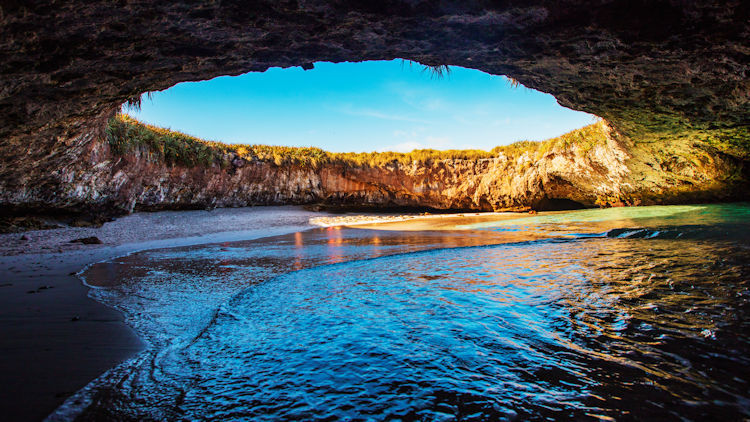 For those grounded travelers seeking ways to satisfy their wanderlust, Riviera Nayarit introduces a new interactive tour of its popular Marietas Islands featuring more than 30 images and 360 degrees of views of this alluring attraction. The virtual reality experience was a collaboration between the Riviera Nayarit CVB, the Bahia de Banderas government, Jebus Media, and Mictlán Surf School. In addition to virtually visiting the Hidden Beach and observing the native flora and fauna of the islands, viewers can also explore La Nopalera beach, el Puente de Piedra (the stone bridge), El León, Los Morros, and the Mictlán cave, to mention a few.

Islas Marietas National Park is an archipelago located on the north coast of Banderas Bay, 8 km from Punta de Mita. It is composed of two islands, 900 meters from each other, which date back some 60,000 years and resulted from volcanic activity. Isla Redonda (where Playa del Amor is located) is about 1,000 meters long and 500 meters at its widest point. Isla Larga is about 900 meters long and 400 meters wide. There are also two islets and other minor mounds.

The area was named Islas Marietas National Park in April 2005 and three years later, was designated a Biosphere Reserve by UNESCO. It has also been internationally recognized as a Ramsar Site, which makes it a privileged place to visit and a place that must be respected.

The interactive Isla Marietas tour can be found at www.Rivieranayarit.com, here or to explore tours in the destination, check out Vallarta Adventures.