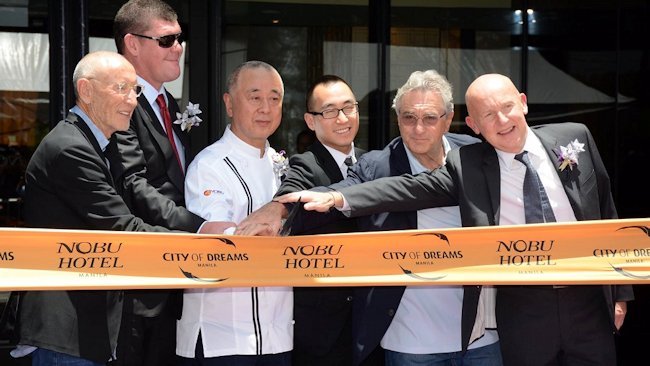 Star-studded entertainment was also on the menu, with a surprise solo performance by international superstar Apl de Ap, best known as a member of the Grammy Award-winning group The Black Eyed Peas.

Combining a fusion of laid-back luxury, high-energy nightlife and exclusive guest room retreats, Nobu Hotel at City of Dreams Manila provides the ultimate playground for Philippines, Asian and international visitors, complimenting the world-class array of entertainment and luxury lifestyle offerings to be found at Manila's newest and most prestigious leisure-destination.

The acclaimed Chef Nobu's culinary empire spans through 36 restaurants, in 31 cities and five continents. Guests at Nobu Hotel Manila can savor his signature contemporary artistic fusion and mouthwatering cuisine in the hotel's Nobu Restaurant within an idyllic setting including an outdoor cabana-styled dining terrace situated on an exclusive platform deck.

The Nobu Hotel also offers, exclusively to its guests, a special in-room menu featuring Nobu-inspired menu items, together with the Nobu Lounge situated in the hotel's lobby and the Nobu Spa & Fitness Room situated adjacent to the raised platform deck area.

Nobu Hotel Manila is situated within City of Dreams Manila, strategically located at the gateway to Manila's Entertainment City, which since opening in December 2014, is now delivering on its stated aim to become the premier leisure and entertainment destination in the Philippines and within the region.
Like Us
Facebook
Follow Us
Twitter
Follow us
Instagram