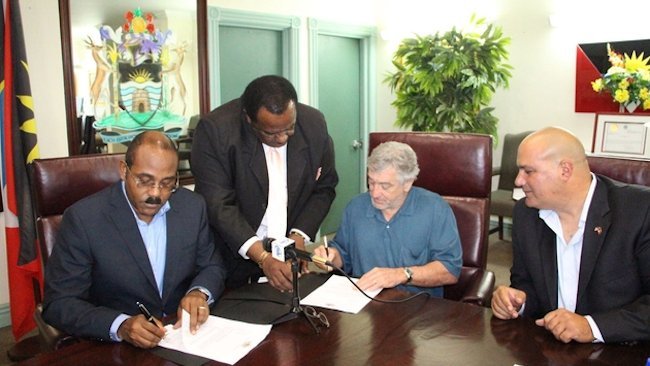 DeNiro's project, which Browne said will be launched through a partnership headed by DeNiro and Australian businessman James Packer, would renovate and expand Barbuda's defunct K Club resort into a new luxury property. The K Club's most famous visitor was Princess Diana who stayed four times, twice with the two Princes.

Browne said he expects the deal to be signed late next month, construction beginning within the next 12 months.

“We are indeed very delighted that Mr. DeNiro will be embarking on a very exciting project on Barbuda, transforming the island,” Browne said, “making it one of the most exciting islands in the region. The project is attracting additional investors to our country.”

DeNiro has previously developed hotel properties in partnership with restaurateur Nobu Matsuhisa. However the Barbuda project will not involve the Nobu brand and instead will be developed under the brand name “Paradise Found,” said Browne, who did not release additional details of the agreement. According to local media reports, the property's lease is held by Italian fashion designer Mariuccia Mandelli.

The DeNiro project announcement follows the government's announcement earlier this year of plans to for a $2 billion, 1,600-acre mega resort on land formerly owned by jailed former financier Allen Stanford.