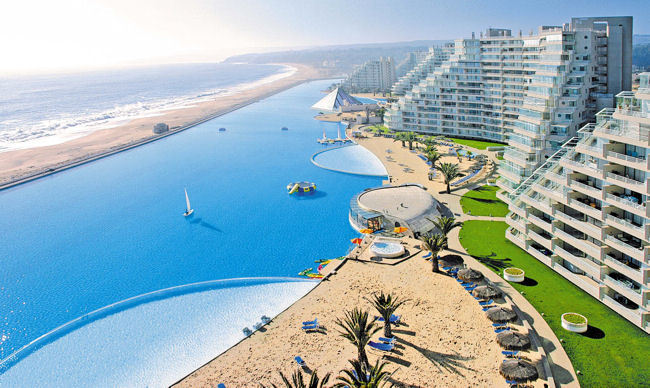 December 7, 2007 - Guinness World Records made a valuable contribution to Chile's image as an innovative country, capable of exporting technology and know-how to the whole world. Just a few days ago the venerable institution certified that Chile's Fifth Region holds the largest man-made pool on earth (with and area of 8 ha, a length of 1 km and a volume of 250 thousand m3). The waters, extracted from the Pacific Ocean, remain warm and crystal clear.

The star of the show is the man-made pool in San Alfonso del Mar, a tourist and real-estate project located in seaside Algarrobo. It's a navigable lagoon, six times bigger than the Orthlieb Pool in Casablanca, Morocco. The latter extends over 1.5 ha in the middle of a semi-artificial rock formation and its waters are less crystalline.

When Guinness World Records officially announced its recognition to San Alfonso del Mar, the resort's officials were proud to explain that "the factors determining this coveted award were mainly the gigantic dimensions of the lagoon - equal to six thousand residential pools - added to unique aesthetic and health features, specifically clarity, transparency and an intense turquoise color resembling that of tropical seas.

It is a well-deserved reward for the development of an exclusive technology, completely created in Chile by San Alfonso del Mar's President Fernando Fischmann, who said that “this triumph is the acknowledgement of years of dedicated work.” Mr. Fischmann, a Universidad de Chile biochemist, conducted research for a decade to improve his technology that allows the low-cost design, construction and maintenance of unlimited volumes of crystal clear water. The process employs no filtration and reaches a degree of purification that makes the water safe even for human consumption.

As to ProChile, it reported that the innovative value of this achievement and its underlying concept, registered as “Crystal Lagoons,” will be exhibited next October at Dubai's Cityscape Fair, which is the biggest and most influential in the world for the real-estate and tourism industry. Insisting on the international importance of this recognition, ProChile's national director, Alicia Frohmann, highlighted the lagoon's "potential for large-scale projection locally and abroad, which opens the doors to the mass application of a one-hundred percent Chilean technology that will ta the name of our country to the whole world."

San Alfonso del Mar officials agree with Ms. Frohmann's words and add that "the world record turns this advancement into a far-reaching business, whose significance lies in solving something that was technically impossible up to now: obtaining massive volumes of crystal-clear water. This leads to the creation of top-notch surrounding beach life and the possibility of practicing water sports in places with previously inadequate conditions. We're talking about a revolution in the world's tourist industry, enabling the development of premium man-made beaches in totally different areas of the planet. The only requirement is fresh or sea water to be extracted in small amounts."

The Guinness World Record is already making a contribution to our country image, by emphasizing the commercial potential of both these crystal clear lagoons, and of Chile as an innovation and know-how exporter. In fact, relevant international real-estate consortia interested in San Alfonso del Mar that visited the resort to explore the process, are making fast progress in their negotiations to create strategic alliances or franchise the technology.

The next few months will be essential for confirmation of these artificial lagoons in local and foreign resorts. Fischmann announced projects involving Latin American, Middle Eastern and Asian companies, with two contracts with Panama and Dubai at an advanced stage. Meanwhile, local projects include Laguna Vista, also in Algarrobo, and plans to build two thousand condos in the city of La Serena facing a crystal clear lagoon, which are awaiting municipal permits.

As proof that Chile has the raw material needed to achieve world standards in technological research protected by the law, Crystal Lagoons obtained a patent from the Chilean Department of Industrial Property of the Ministry of Economics; another from the PCT – International Patent Cooperation Treaty; and more from nations that have not signed the treaty. In this way, it covers most countries in the world.

Together with the Largest Crystal Clear Lagoon on Earth, San Alfonso del Mar boasts an infrastructure brimming with cutting edge technologies, such as man-made white sand beach areas with swimming pools and both outside and inside Jacuzzi tubs (a crystal pyramid unique in South America), solar heating, and water currents and cascades.

It has a first-class ocean aquarium, the biggest in the country, holding more than 42 Chilean species clearly viewed along 25 meters of glass walls. The aquarium is attached to the lagoon and uses the same water that feeds this monumental pool.