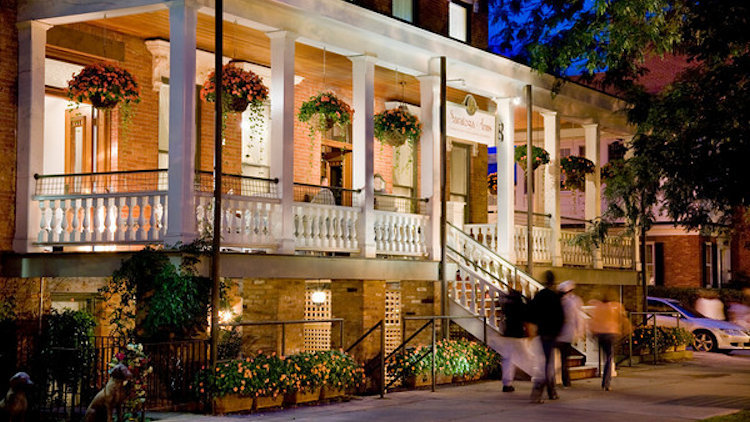 Saratoga Springs, a town enhanced by a history of health, wealth and racing, was first and foremost a town blessed with nourishing mineral springs. These magical waters were undiscovered until 1771 when a British general attributed the cure of his leg wound to High Rock Spring.  Post Revolution, this site became a refuge for luminaries that ranged from George Washington to Alexander Hamilton.

Horses, Food & All That Jazz

When steamboats began plying the Hudson, a gambling casino on Saratoga Lake drew a different crowd to the town.  Today, it is a hub for thoroughbred horse racing and home to the famed Saratoga Race Course.  The town was ranked in a list of the top ten places to live in New York and there’s culture aplenty as the renowned New York City Ballet and the Philadelphia Orchestra both make this their summer home. Popular performing artists play to sold-out audiences each year and annual events include the Saratoga Wine & Food Festival and the Freihofer’s Jazz Festival.

The Wine & Food Festival happily coincided with my Saratoga Springs visit this past October. The Festival is the largest fundraiser for the Saratoga Performing Arts Center (SPAC),  benefitting its educational program that, under  President and CEO Elizabeth Sobol, has grown from serving 5,000 students to more than 49,000 in a mere four years.  I was delighted to learn more about this worthy organization and, of course, to attend the weekend’s most happy place – its 19th annual Saratoga Wine & Food Festival!

This year the Festival was highlighted by two main events: a brand-new farm-to-table harvest dinner and a Grand Tasting the next day. Using locally sourced ingredients and the finest wines curated locally and globally, this proved to be a tantalizing feast for the senses - all presented in a beautiful setting overlooking the opulent Spa State Park reflecting pool.

Watching The World Go By

What a treat it was to be a guest at Saratoga Arms, an 1870 beautifully restored, award-winning, Second Empire hotel. In the 1950s the property was run as a rooming house. Ultimately Saratoga Arms was purchased by Kathleen and Noel Smith in 1997 and they were involved in the day-to-day planning and oversight of the extensive renovation that reopened in 1999 as a luxury inn. A delightful feature here is the wide wrap-around Saratoga porch that welcomed and invited me to relax and people-watch on the town’s main street.

Naturally I could not visit Saratoga Springs – this haven infused with history and hydrotherapy -  without partaking of an iconic mineral bath so it was off to The Roosevelt Baths & Spa.  Established in 1935, the spa resort opened thanks to President Franklin Roosevelt’s visionary act to preserve this area’s famed springs. I had a private soak in some naturally effervescent waters whilst being attended to by a caring, professional staff.

Transformed, revitalized and refreshed, I was quite ready for a fun evening at the historic Caffe Lena. As the longest running venue of its kind - the Library of Congress has called it “an American treasure” – it has been recognized by The Grammy Foundation for its important contributions to the development of American music. That said, Caffe Lena is proud to stay true to Lena, its founder, whose vision was of simplicity, kindness to strangers and art above profit.  The place has a warm, intimate feel -  a sweet end to a day filled with fine weather, warm water, and some happy folk music.

During my stay, I brunched at an appealing restaurant housed in the renowned Adelphi Hotel that opened its doors way back in 1877 to well-heeled vacationers seeking the lap of luxury among the natural spas and springs that made Saratoga a resort. Prominent politicians met with movers and shakers of the day at the famed Adelphi bar as the hotel was once considered the hub of the town’s society. Through a visionary redesign and a $28 Million makeover, this remnant of 19th century hospitality has recently been reborn and welcomed me to dine in its pretty sun-splashed conservatory restaurant, the Blue Hen.

Commencing this month, Saratoga Springs’ main thoroughfares will be lined with iconic seasonal fairy lights and decorations. Broadway will have a massive wreath at Adirondack Trust Company and there will be gorgeous window displays at G. Willikers. Beekman Street is cozy and quaint all year long but now will be transformed into its own little happy world. Kids will love seeing the Saratoga Springs Fire Station lit up in a variety of hues, and North Broadway’s historic district is lined with lovely Victorian homes. When the decorations go up, this street turns into an illuminated wonderland.

No matter the season, pure pleasure can be found simply strolling along Broadway lined with a mile or so of some of America’s most beautiful 19th century asymmetrical mansions, all in excellent shape. Some are brightly colored, some turreted, others with widow’s walks and bay windows of stained glass. With Gothic Revival, Queen Anne and Italianate elements, Saratoga Springs is not unlike a Hollywood street set for “Meet Me in St. Louis,” only here authenticity rules –  and that’s just the way we like it!