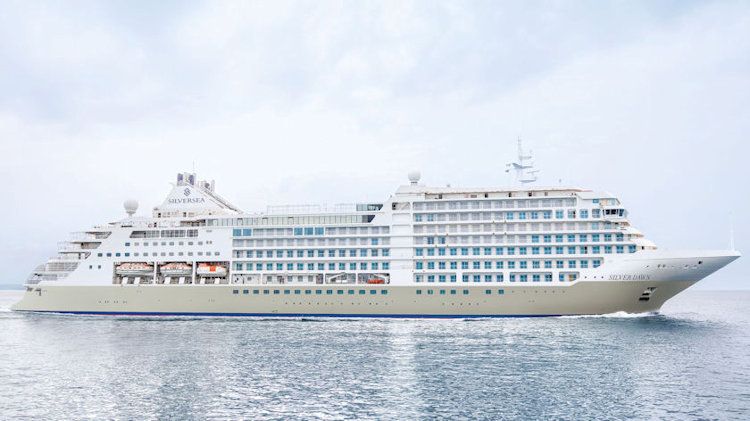 Silversea Cruises, the leading ultra-luxury cruise line, officially named its 10th ship, Silver Dawn, in Lisbon on March 31. Executives from Royal Caribbean Group®, Silversea Cruises, and Fincantieri, as well as local dignitaries and esteemed guests, celebrated the milestone with a formal ceremony and gala dinner. An expression of Silversea’s rapid expansion, Silver Dawn becomes the cruise line’s third new ship to debut in nine months. The launch of Silver Dawn also marks the debut of Otium, travel’s most indulgent new wellness program, as well as the next iteration of Silversea’s S.A.L.T. culinary program.

After Royal Caribbean Group’s customary bagpipe performance, which opened the formal naming ceremony, performers took to the stage, entertaining attendees with a performance that weaved a narrative from the 2021 launch of Silver Moon to the modern day and the launch of Silver Dawn. Singers recited the national anthems of the U.S.A., Italy, and Portugal, before a religious leader blessed the ship and dignitaries delivered speeches. The newly named Godmother of Silver Dawn, Nilou Motamed—an influential food and travel editor, tastemaker, and television personality—subsequently cut the ribbon to trigger a champagne bottle to smash on the ship’s hull, signalling the end of the ceremony.

An Emmy-nominated television personality and former editor-in-chief of some of the world’s leading culinary brands, including Food & Wine and Epicurious, Nilou Motamed has been shaping the conversation in food and travel for more than 20 years. Born in Iran, raised in Paris and New York, Motamed is fluent in four languages — and believes “food is a language of its own, one in which everyone can find comfort, compassion, and community.” Her passion for culinary adventures and far-flung cuisines has found a perfect match in Silversea’s S.A.L.T. programme, which the New York resident first experienced with its launch in 2021.

Silver Dawn becomes the latest ship in Silversea’s popular Muse class. The most discernible difference between Silver Dawn and her sister ships, Silver Muse® and Silver Moon, is the new Otium wellness programme, which launches as a unique innovation. It is the only wellness program at sea that incorporates champagne, chocolate and other gourmet snacks; signature cocktails; bespoke in-suite experiences; a Roman-influenced spa; and a wellness journey that extends throughout the ship. Grounded in the philosophy and traditions of the ancient Roman lifestyle, in which otium was a period of time dedicated exclusively to leisure, the Otium wellness program is built on principles of indulgence, pleasure, and pampering. Spanning almost 800m2 on deck six, Silver Dawn’s spa has been completely redesigned for a more seamless wellness journey.

Silver Dawn departs on her inaugural voyage on April 1, sailing from Lisbon to Barcelona. She is scheduled to sail in the Mediterranean until November, when she will cross the Atlantic Ocean, via the Canary Islands, to unlock the Caribbean and Central America for guests.