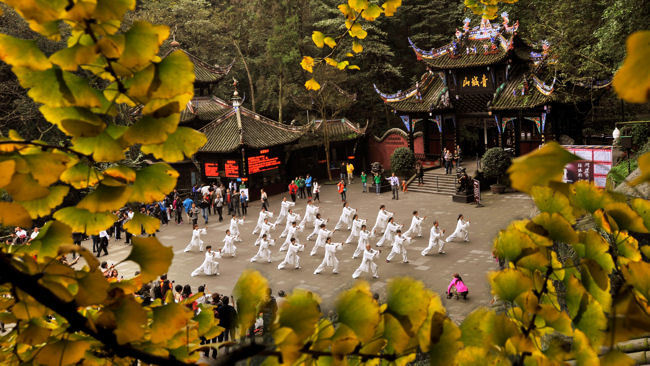 Its unique feng shui blends this quaint retreat naturally into the mountainous environment making it a magical retreat to perform the martial art of tai chi.

Guests at Six Senses Qing Cheng Mountain are driven to the Puzhao Temple which is just 20 minutes from the resort. Upon arrival, they are greeted by a tai chi master who has trained under Liu Sui Bin, one of the most famous tai chi grandmasters in China. This particular part of the temple was chosen for its beauty and tranquility, which allows guests to deeply focus on the flow of their movements. During this one hour experience, the tai chi master teaches guests introductory breathing exercises and movements which form the basis of this incredible martial art. During the practice, participants are treated to the sounds of chirping birds and greeted by the ever present peacocks which stroll past, symbols of good fortune which are cared for by the temple monks.

The master teaches a particular style of tai chi which found its origins in the area and was named Qing Cheng Tai Chi Six Moves.
Tai chi is often called meditation in motion and focuses on the healing properties of qi (life force). Through gentle movements and focused breathing, the mind becomes relaxed and the body is strengthened. Tai chi has numerous health benefits including lowering blood pressure and improving quality of sleep. Tai chi can be practiced by children and adults of all ages, and is a culturally enlightening approach to living a healthier lifestyle. Tai chi traces its roots back to Taoist and Buddhist monasteries where monks developed the techniques as both a martial art and as way to improve their health. In order to best harness one's qi and begin the day with increased energy in both mind and body, it is best to do tai chi early in the morning.

"Tai chi is one of China's most fascinating art forms,” said Six Senses Qing Cheng Mountain General Manager Manish Puri. “And the Puzhao Temple with its deep rooted history, pristine ambiance, and perfect feng shui make this the ideal place to learn this healthy and spiritual exercise. Having been there myself many times it is not only for the tai chi but also for the history, religion and culture. I always light some incense sticks and perform a short prayer in the temples just after finishing the tai chi exercise."

The package includes the following components:

This memorable experience can be booked a day in advance. The price for one guest is $150.