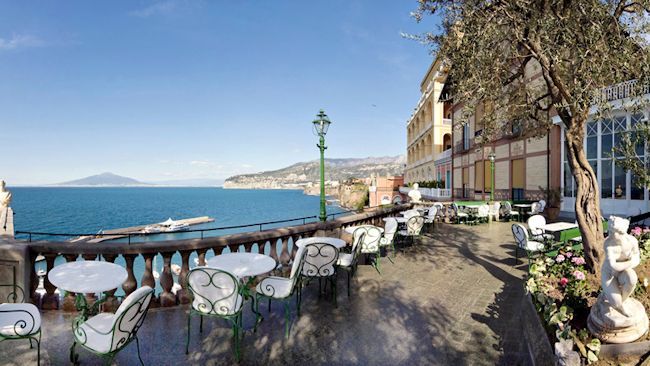 This iconic Amalfi Coast property was founded by the Fiorentino family in 1834 and the family's fifth generation is still running the hotel today, keeping alive a long tradition of Italian hospitality excellence.

With that said, what better time to put the spotlight on this stunning five-star luxury hotel? Located in Sorrento's town center and sitting on a high cliff overlooking the Gulf of Naples and Mount Vesuvius, it is the same place where, legend has it, the Roman Emperor Augustus had his own villa. Easily recognizable when arriving from the sea, the hotel's three classic nineteenth century buildings are just above the town harbor, and the property is surrounded by the lush greenery of a 20,000 square-meter Mediterranean garden.

One of the Leading Hotels of the World and a member of Virtuoso, The Grand Hotel Excelsior Vittoria offers its guests luxury service with the greatest comforts, most notably, their luxurious suites with sea views. The suites: Margaret, Caruso, Aurora, Antique, Royal, Pompei, Imperial and Vittoria are just a few of the hotel's most famous, not to mention the Aranci Suite which overlooks the on-site orange and lemon grove (The Grand Hotel Excelsior Vittoria also boasts the Boutique Spa la Serra, which incorporates a variety of citrus in their luxury spa treatments). Each suite has its own interesting history, with the passing of many celebrities like Sophia Loren, Jack Lemmon, Marilyn Monroe, Luciano Pavarotti and Lucio Dalla. Over the years, in its long history, The Grand Hotel Excelsior Vittoria was part of the Grand Tour and has welcomed monarchs, politicians, artists and celebrities.

In celebration of 180 years, have a look at a few of the images below to drum up some serious Italian wanderlust. If visiting, don't forget to try the Michelin-starred restaurant, Terrazza Bosquet, which features delicious regionally-inspired favorites from Chef Luigi Tramontano.