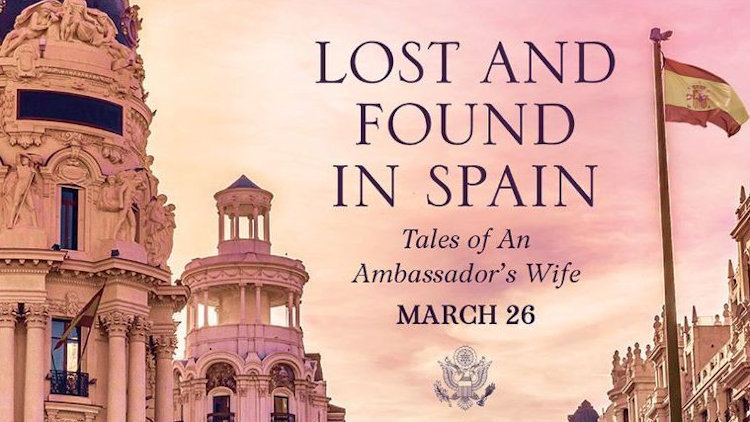 Imagine visiting an exciting new country not as a traveler or tourist, but as the U.S. Ambassador’s wife.

Getting out of the capital and into every imaginable region is part of your official role. You’re given detailed briefings about the history of each place you visit, a chance to meet and connect with locals every step of the way and, of course, myriad opportunities for delicious meals.

Susan Solomont has had this experience first-hand. From 2010-2013 while her husband Alan was serving as U.S. Ambassador to Spain, Susan got to know the country in remarkable depth. Having learned everything she possibly could about the country and traveled to 16 of Spain’s 17 provinces, she became a self-described “Spain maven.”

Now she’d like to share her tips with your audience. As she writes in her memoir, Lost and Found in Spain, Tales of an Ambassador’s Wife (Disruption Books, March 2019), beyond fiestas, tapas and wine, each Spanish city has its own unique pace of life, own traditions and festivities. Susan can walk you through how to go off the beaten path in Spain and experience the hidden gems, the history and the local flavor of the country’s:

Walled Cities and Roman Ruins
Don’t miss the medieval buildings of Pedraza, Sigüenza’s Gothic cathedral and Roman wall remnants. Toledo, ½ hour by high speed train from Madrid, is known for its medieval Arab, Jewish and Christian monuments and home to El Greco, one of Spain’s most famous painters.

The Extremedura province west of Madrid is filled with Roman ruins and walled cities. Segovia is home to Spain’s best preserved Roman aqueduct, and in Girona, you’ll find Roman ruins and ruins of ancient Jewish sites.

Museums and great works of art
Sorolla’s House in Madrid was once the home of 20th century artist, Joaquin Sorolla. It’s filled with his beautiful landscapes and portraits and artifacts. In the walled city of Pedraza, you’ll find a castle filled with works by Basque painter, Zuloaga. Figueres is home to Dali’s Museum of Theater. In Malaga, you can visit Picasso’s home. In Bilbao you can view the greatest collection of Basque art in the Museo des Bellas Artes

Vineyards, Olive Groves and Sandy beaches
Spain is the third largest wine producer in the world and has over a million acres dedicated to vineyards. One gem not to miss: Rioja, with its Marques de Riscal Hotel designed by Frank Gehry; and in La Rioja is a great wine museum. Spain has olive groves scattered over almost all the country, with the biggest concentration in Andalusia. Mallorca, Menorca, and Ibiza in the Balearic Islands are home to some of the world’s most peaceful, pristine beaches. Make sure to eat lunch in a beachside chiringuita.

Buy book on Amazon.com: Lost and Found In Spain: Tales of An Ambassador's Wife