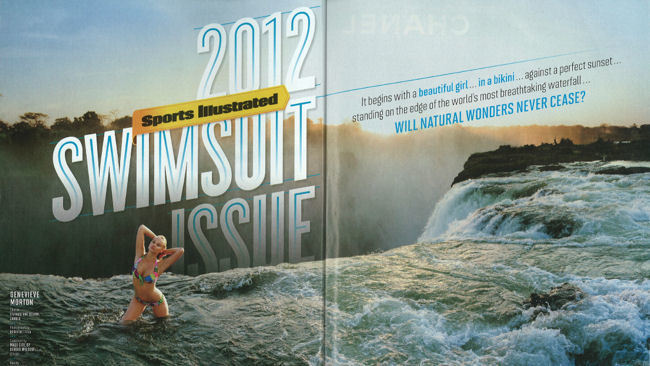 In addition, its National Soccer Team just won the much-envied Africa Cup of Nations, a triumph that catapulted the team from 16th to 4th place in Africa; and the country will co-host (with Zimbabwe) at Victoria Falls the United Nations World Tourism Organization Conference in 2013.

"Zambia is home to Victoria Falls, the Lower Zambezi, the walking safari and one of the greatest wildlife reserves in the world, South Luangwa National Park," said Zambia Tourism Director Margaret M. Makungo. "To have our country showcased in Sports Illustrated with all those beautiful models on site is just wonderful. Coming on top of our soccer team's great championship is simply beyond description. And being named co-host country of the UN World Tourism Organization Conference in 2013 is icing on a many-layered cake.”

Sports Illustrated's Swimsuit Issue is the planet's most-read edition of any magazine. The 2012 issue was photographed in five countries, but Zambia is the first presented. Some 17 models and stylists flew at varying times via South African Airways to Joburg and on to Lusaka. Then photographer Derek Kettela took shots of supermodels Genevieve Morton, Irina Shayk, Cintia Dicker and Kirby Griffin posed in a number of Zambia's iconic locations and venues:

Livingstone Island to access the Devil's Pool (see photo above), a phenomenon of Victoria Falls. The currents flow around this shallow pool at the lip of the falls, thus allowing the intrepid to go up against the edge of the falls without being swept over. Model Genevieve Morton, whose late mother was born in Zambia and dreamed of returning one day, said, “I feel like I'm fulfilling both her dream and mine."

Victoria Falls, the world's largest curtain of falling water and one of the Seven Natural Wonders of the World, is known locally as the “smoke that thunders” for its massive spray and pounding rush. The falls is Zambia's proudest natural feature and a draw to tourists and honeymooners world-wide.

Stanley Safaris Lodge, a luxury safari lodge located a stone's throw from the Falls and within eyeshot of it.

Tongabezi Lodge, a five-star romantic retreat set on the Zambezi River which flows into the Falls.

Mukuni Big Five Safaris, where visitors can walk with lions and interact with cheetahs.

Mosi oa Tunya National Park, a UNESCO World Heritage Site, that includes the Zambia side of the Falls (the other side is in Zimbabwe) as well as bush rife with rhinos, elephants and other big game.

Africa Cup of Nations
In 1993, the entire Zambian national soccer team perished when its military plane heading to playoffs in Gabon crashed in the sea, killing all on board. Thus, their victorious win of the Africa Cup of Nations this past Sunday, was especially sweet and the celebrating colossal. As described in the New York Times, “Car horns and vuvuzelas blasted throughout the night in the capital of Lusaka, fans cloaked in the green and copper colors of the national team streamed into streets around the country, and schools closed for a self-declared national holiday."

The victory is expected to impact Zambia's economy positively. According to the Times of Zambia, “Economic experts and stakeholders in the business community have said Zambia's winning of the African Cup of Nations will boost the economy and help enhance productivity in the copper-producing country."

That boost is expected to be immediate. In the Times of Zambia article, economist Chibamba Kanyama was quoted as saying, "The victory would have gross economic impact due to expected increased levels of infrastructure developments and high morale among the workforce."