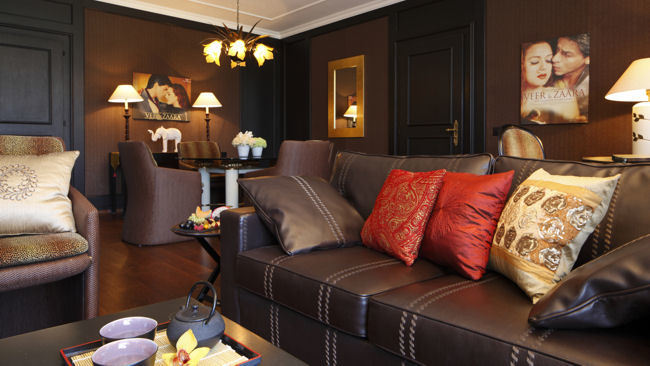 Swiss design doesn't have to be all about strict minimalism and clean lines. Victoria-Jungfrau Grand Hotel & Spa in Interlaken has declared 'auf wiedersehen!' to such Swiss tradition by renaming Suite 250 the 'Yash Chopra' Suite and converting all 915 square feet into a Bollywood wonderland as a tribute to the famous Indian film director and newly-appointed Interlaken Ambassador, Yash Chopra. With nary an equilateral red cross to be found, the suite's walls are adorned with posters of Mr. Chopra's award-winning film Veer-Zaara, while decadent silk fabric and gold motifs appear throughout.

Thun-based design firm Raumforum selected whimsical Indian touches for the living room space, including a lacquered white Ganesha sculpture and velour leopard-print pillow cushions that pop against the deep neutrals of the leather furnishings. Additional Indian accessories include traditional Indian carpets and silk bedspread, while an Indian tea service is available for Bollywood stars and starlets to enjoy a cup of morning Darjeeling.

The Yash Chopra Suite includes a living room, bedroom with en suite bathroom, and guest bathroom. It has its own balcony with views of the Jungfrau Massif and is available from 2,250 CHF, approximately 2,695 USD, for two, breakfast buffet included.