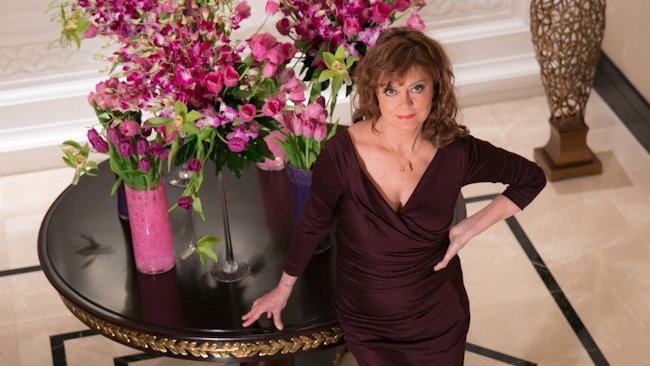 Susan spent two nights in one of the resort's Royal Residences - a cluster of 38 four and five bedroom villas situated around a lagoon pool or facing the sea. During her stay, she enjoyed spending time in Talise Ottoman Spa, one of the largest and most luxurious spas in the region, where she indulged in a Talise Signature massage.

Susan commented on her stay: “Jumeirah Zabeel Saray is a beautiful hotel and has been the perfect place to stay while in Dubai. The service is fantastic, the location unique and the Royal Residence is truly a home away from home. I look forward to coming back.”

Also during her stay, Susan went to experience the Ultimate Afternoon Tea at Burj al Arab, the world's most luxurious hotel and sister property of Jumeirah Zabeel Saray, taking a tour of the hotel with a special visit to the hotel's helipad.

As an avid ping pong fan and Global Ambassador for SPiN Galactic, (a Ping Pong nightclub concept popular in the USA) Susan was in town to launch SPiN Dubai – home of the world's first solid gold ping pong table - alongside actor Jesse Metcalfe, who made an appearance at the event while he was staying in the city at Jumeirah Emirates Towers.

Since opening in January 2011, Jumeirah Zabeel Saray has been a popular destination with a number of world-famous celebrities including Tom Cruise, where he filmed the Hollywood blockbuster movie, Mission Impossible 4: Ghost Protocol, as well as Grammy award-winning singer, Ne-Yo and former Pussycat Doll, Nicole Scherzinger during filming for the Judges' Homes scene for the UK version of X Factor in 2012. Other visitors to the hotel include world-famous singer, Lionel Richie, leading actress Uma Thurman and Manchester United footballer Rio Ferdinand.