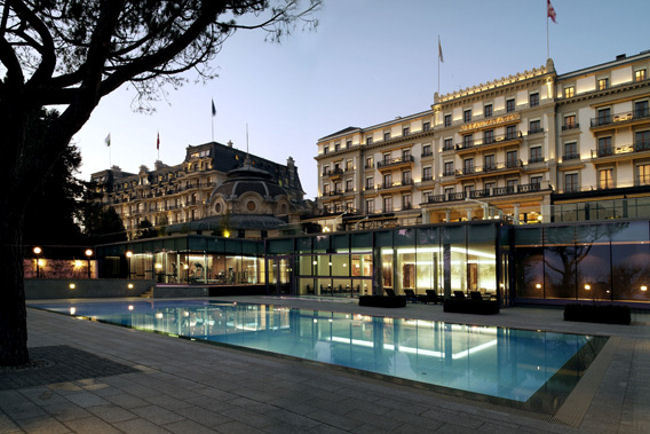 The renovation of La Rotonde, which was originally built in 1908 and is classified as a historic monument, required numerous specialists - restorers, painters, tinsmiths, carpenters, metal-workers and statigraphers, to name a few - to successfully bring to life the final vision of the space while complying with the strict regulations required by its unique heritage status.

No detail was overlooked - the original colors that graced its walls in the early 1900s were painstakingly restored through stratigraphy, a process that carefully removes each layer of paint applied over the years. Artwork restorers carefully uncovered the original details of the room's magnificent fresco, while original Gobelin carpets were sent to Basel to be repaired. Light fittings were sent to France for expert work. Over 1,584 pounds of paint and nearly seven pounds of gold leaf were used in the renovation, along with 330 pounds of mastic and 528 pounds of plaster.

The finishing touch: natural light flowing in through the windows of the adjacent La Terrasse, highlighting every splendid detail of the restored space.

La Rotonde is available for private banquets and cocktail receptions.

Before beginning construction of La Terrasse, approval was required from the Historic Monuments Commission as the Beau-Rivage Palace is a listed building. The project was approved under the determination that the glass structure highlights the original Rotonde façade and because a previous terrace had once existed as an extension of La Rotonde, making the venture a modern expansion of the hotel's rich structural history.

13 large glass panes, each weighing 2,134 pounds, and four smaller ones, each weighing 924 pounds, were installed in a circular form along the length of the space. Together with the roof - which is also made of glass (before, it was zink) - the structure contains more than 16 tons of triple-paned glass (the extra thickness provides sun protection). The result is a space of transparency and lightness: an absolute tour de force!

La Terrasse was once home to the property's Michelin-starred restaurant (the hotel now has a new two-star Michelin restaurant, Anne-Sophie Pic at the Beau-Rivage Palace). It is open on weekdays for breakfast and for Sunday brunch (with a separate children's room). It is also available for use for private events, and can be combined with La Rotonde for larger events.