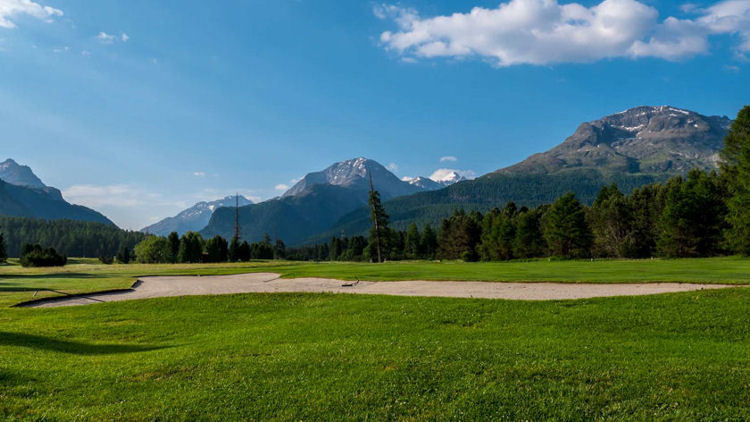 Switzerland’s oldest golf club, the Engadine Golf Club, established in 1893 and located in the picturesque Engadine Valley, will this year celebrate its 125th anniversary with a number of commemorative golf events while also looking back on its rich, eventful history.

The Engadine Golf Club not only has a fascinating story to tell but the fact that the golf club is home to two separate, very different golf courses located a mile apart and run by a single organisation, Golf Engadin St. Moritz, sets it apart from most traditional golf clubs.

The 125-year-old Samedan course is an ancient, links-style parkland layout that runs along the flat valley floor, meandering through streams and characterized by broad fairways flanked by giant larch trees whilst its younger sister course at Zuoz-Madulain, opened in 2003, offers challenging elevation changes, undulating fairways fringed by meadow flowers and receptive greens as it weaves its way along the side of the mountain and between the pine forests.

Situated on some of the highest terrain in the country and within a UNESCO World Heritage site, both Samedan and Zuoz offer stunning views of the towering Alpine mountains beyond and many of the charming villages of the Engadine Valley.

To mark the 125th milestone and ensure an unforgettable year for the club, Golf Engadin St Moritz is hosting a series of golf events over the summer as well as staging two exhibitions to showcase the unique history of the club. Preparations for the anniversary actually began in 2016 when the club decided to plant 125 sapling larch trees on the Samedan and Zuoz courses. With some of the existing larch trees even older than Samedan, 125 club members sponsored the planting of a single larch each to guarantee the future of both courses and their characteristic larch populations.  This sustainability project will be recognised at the Anniversary Tournament on August 1 when Mixed Foursomes will be played, just as it would have been some 125 years ago. An Anniversary Dinner will then take place that evening at the famous Badrutt’s Palace Hotel in St. Moritz. However the first event to launch the summer celebrations will take place on June 6 when the club’s partners, local dignitaries, hotels and nearby golf clubs will be welcomed to the Samedan clubhouse for a look behind the scenes at Engadine Golf and to view an exhibition of over 20 posters located around the Samedan golf complex depicting the club’s history. This will be followed by the St Moritz Gold Cup in July, the Swiss Senior Amateur Championship the week after that and the three-day GolfersChoice Engadin ProAm over both golf courses in August.  The Engadine Golf Club will also be the theme of an exhibition at the Design Gallery St Moritz from June to December. Along the famous giant escalator from Lake St Moritz up to Badrutt’s Palace, 31 posters will portray the times gone by at the club as well as the development of golf in the Engadine. Finally a 20-year-old single malt whisky by Glentauchers in just 246 numbered bottles, 125 of which come with a matching decanter designed by Robert Niederer, has also been produced to mark the jubilee. This being a nod to the fact that at the end of the 19th and start of the 20th century, sandwiches were washed with whisky for breakfast at Samedan!