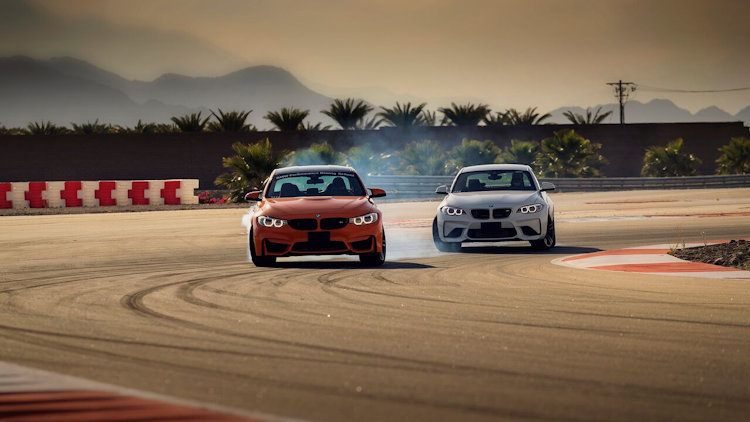 The objective was simple, stay safe but go as fast as possible. Coming around a sharp turn I careened onto the straightaway. I pushed the accelerator to the floor. The BMW M3 screamed like a siren, g-forces pushed me against the seat.

But the numbers on the side of the track ahead of the next turn told a different story. “5” meant take my foot off the accelerator. “4” meant slam on the brake pedal as hard as I could. “2” was my last warning to slow down before the turn. In a split second, the M3’s carbon-ceramic brakes held steady as I slowed from 118 to 60.

Following my friend Dean and Bryan Randall, our Performance Instructor, our one-car-after-the-other, follow-the-leader formation took the turn as we headed for the straightaway in front of the Thermal Club grandstand.

Our race around the South Palm Circuit track was part of a day we spent at the BMW Performance Driving School in Thermal, California, forty-five minutes south-east of Palm Springs. We were there to learn driving skills basic to race car drivers and to experience the thrill of driving a high-performance vehicle without worrying about speed limits. 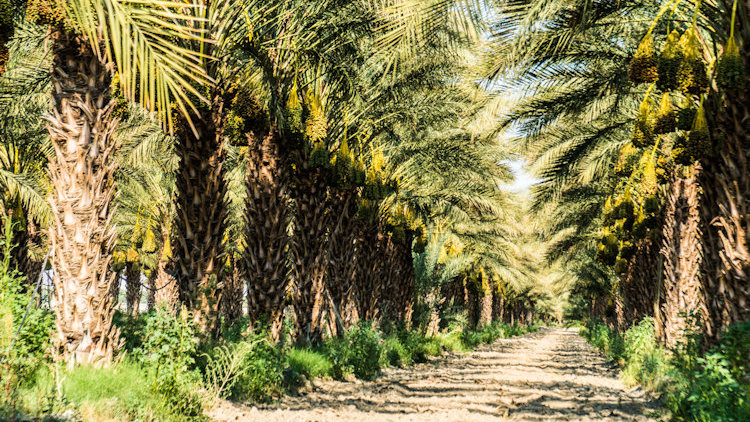 The Road to Thermal

Passing by Palm Springs, we drove on a well-landscaped, four-lane road. We passed communities of freshly minted houses designed for people who wanted to enjoy endless days of sun and warmth, man-made oases in a sea of sand.

We left the comfortable gated communities behind and drove on a two-lane blacktop, yellow broken line down the middle. That lead us into mile after mile of neatly planted date palm groves. The ripening dates were protected inside dark colored bags that hung heavily against the massive trunks.

Thermal, California is aptly named. The towering mountains are too far away to provide any shade so the small city baked in an always shining sun. When we arrived, it was 118 F. 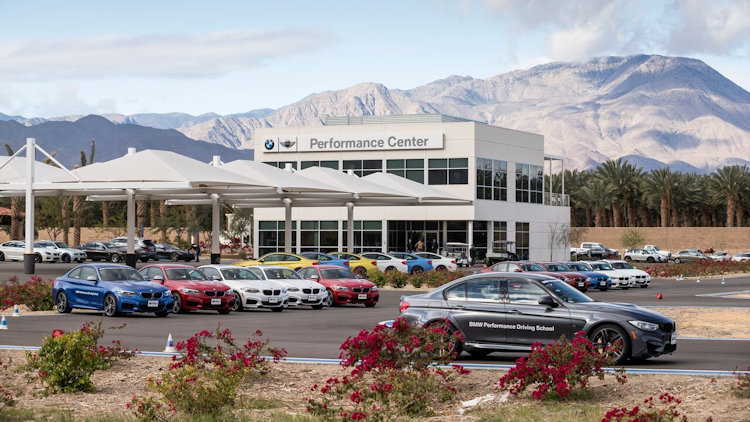 On the edge of the date palm groves, an improbably modern building appeared like a mirage, the BMW Performance Center.

Enroll at the Center and you’ll be offered the opportunity to drive a current model BMW or a MINI. The cars are very different, but the goals are the same. Learn how to be a better driver and experience the thrill of driving high-performance machines on a race track.

Different programs are offered to suit different needs. Choose a two hour, half a day, a full day or a two day program. The longer the program, the more time to fine-tune the driving skills taught by experienced race car drivers. As our instructor, Randall put it, the more time we spent at the school, the more the lessons would be translated into muscle memory.

We had our first lesson with the engine turned off.

Randall had us reexamine the basics. Sitting in the driver’s seat meant making choices. How to position the seat? Where to place my hands on the steering wheel? Each of these choices would affect our ability to control the car when we were placed in a compromised situation or when we were navigating the track at high speed.

I raised the seat so my eyes were in the middle of the windshield. Now I had a clear view of everything in front of the car. I tilted the steering wheel so I had an unobstructed view of the dashboard.

The idea was to connect driver with car, to set up the seat so that I felt like the car was pivoting around my hips. I turned on the engine and placed my right hand at three o’clock and my left hand at nine o’clock. Now we were ready to roll.

First stop was the 360-foot diameter skid pad, a large concrete area that had been polished smooth, the better to promote skidding. The pad was outfitted with sprinklers, so the smooth pad could become even more slippery and treacherous. All fans of the Fast and Furious film series know about drifting, when a car does a controlled skid, sometimes at great speed and always throwing up billowing clouds of smoke.

Even if the movie-version of a controlled skid is an extreme, the basics are important for everyday drivers to know. Sooner or later, a situation will occur where the car is skidding out of control. Maybe the road is slippery from snow or ice or maybe you’ve taken a turn too fast. Whatever the reason, you will need to know CPR and, if that sounds like it will save your life, it will.

CPR stands for Correct, Pause and Recover. When the skid begins, come off the gas gently, keep your eyes where you want the car to be and turn the wheel into the slide. For me, the most interesting lesson was keeping my eyes aimed out the side window, looking where I wanted to go. Normally, I would have looked out the windshield.

The second step, Pause, meant that I held the steering wheel turned into the skid for just a moment. In that split second, the car began changing direction. Once the car rotated away from the skid, I began the third step, Recovery.

Looking out the driver’s side window away from the skid, I turned the steering wheel, holding my right hand on the steering wheel in the three o’clock position and my left hand moving to help my right hand turn the wheel until I was traveling in the direction I wanted. Let my hands follow my eyes, Randall repeated. And it worked!

Once I had recovered, I pressed on the gas and the car resumed turning to the left.

We drove around the skid pad again and again. We tried it slow. We tried it fast. Each time, we learned what worked even as we made mistakes. After several dozen runs, we stopped and climbed out of the car, a bit dizzy but impressed at how effective these simple techniques can be. 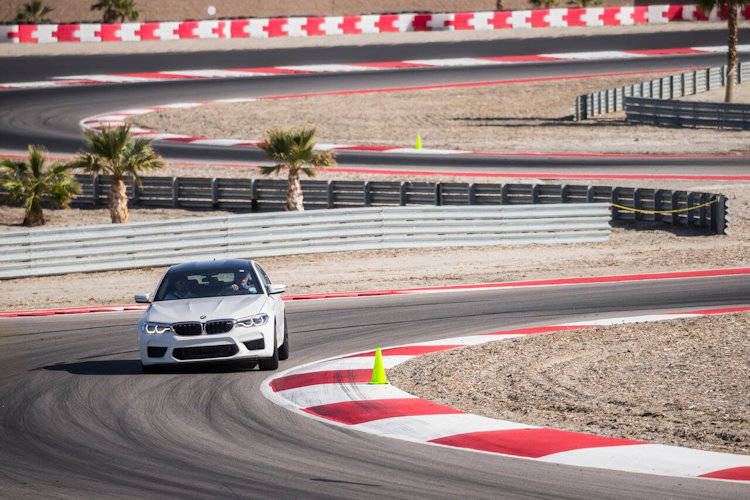 The Thermal Club Track – Safety First, Then Pick Up the Speed

Randall was in the lead car. Dean and I took turns being the second and third chase cars. With walkie-talkies in our cars, Randall guided us as we followed him.

How he conducted the lesson was as important as what he taught us.

Our first time around the track, we traveled at comfortable speeds, between 30 mph on the turns and 50 mph on the straightaways. Randall pointed out the markers on the side of the track: 6, 5, 4, 2. “6” was to tell you to pay attention. “5” meant it was time to slow down before the turn. “4” said “you better have your foot jammed on the brake.”

Following Randall was a great confidence builder. Keeping our eyes on him, we did what he did. But even at comfortable speeds, driving in a powerful car was intimidating. What if I missed a cue and took a turn too quickly? What if I didn’t brake in time and lost control? A terrible image of my bright blue M3 crashing into the guard rails flashed in my head.

Randall understood exactly what we needed. He built our skill set as he built our confidence.

We kept three-four car lengths between us as we followed his car. He talked us through each step. We did as he did. When he slowed down at “5” and “4”, so did we. When he aimed for a lime green cone, so did we. After one lap, he picked up the pace. After the next lap, he drove faster.

His approach was simple. Learn the course, learn what the car can do and understand your limits as you appreciate the strengths of the car.

For both Dean and myself, the most important revelation was the stopping power of the carbon-ceramic brakes. Zooming down the straightaway at speeds higher than we were used to, we slammed on the brakes at the “4” marker and the car slowed without a shimmy, without swerving. The braking was rock solid. We drove fast because we learned we could safely brake without losing control of the car.

That built our confidence. That was liberating. That made driving a race car circuit fun.

Even when I hit 118 mph, Randall said the car had much more to give. But, honestly, I didn’t. That was my limit for my first time on the track.

At the end of session, we joined Randall and the rest of the staff for a chef-prepared lunch in the second floor lunch room with a panoramic view of the skid pad and the BMW course. Over a delicious meal of curried chicken breast, roasted baby Yukon potatoes, a mixed roast of vegetables and a tossed green salad, we talked about how much fun we had and the lessons we’d learned.

There was no question we would come back. Dean was already talking about bringing his 20-something kids. There was so much more to learn. So much more fun to be had. 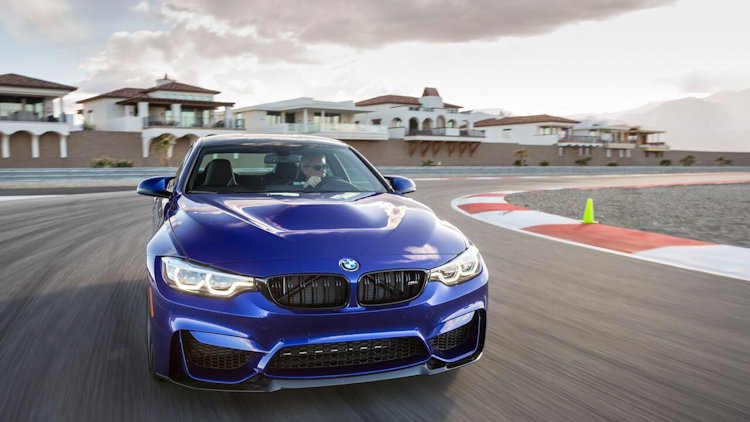 From Los Angeles, the BMW Performance Center West can be reached by car in about three hours, depending on traffic. The Center offers classes and experiences for BMWs and MINIs.

At the South Carolina Center, in addition to programs for BMWs and MINI’s, there are motorcycle programs offering off-road and on-road courses with a choice of BMW motorcycles including the R nine T, F 700 GS, F 800 GS, R 1200 GS and R 1200 GS Adventure. Only for the motorcycle program can riders bring their own BMW bikes.

The only cars that can run on the tracks are the BMWs and MINs provided by the Performance Center. One of the programs gives drivers the opportunity to get behind the wheel of brand new M760s, X5Ms, X6Ms, M2s, M4s, M550s and, of course, M3s. That is a great opportunity for a prospective buyer to try out the diversity of driving experiences offered by BMW.

All the cars used at the school are stock models. The M3s and M4s are upgraded with the Carbon-Ceramic Brake Package and the Competition Pack, which includes an increase in horsepower and an exhaust upgrade.

Driver safety is an important focus of the Performance Center. For the teen classes, a driver must be at least 15 years old with a valid learner’s permit. All other drivers over 18 must have a valid driver’s license.

Consult the website for a full description of the programs offered for adults and teens.

Popular with corporate groups and special events, the school can be reserved for classes which average 12-15 people.

The Thermal Club is an ultra-luxurious, car-aficionados’ motorsport club and resort with many of the houses built overlooking the track. The modern villa homes have garages large enough for as many as 15 cars under BMW car covers or other brands.

The owners-only Thermal Club track is not open to the public except to participants of the BMW Performance School. Owners who have houses at The Thermal Club are allowed to race their own cars on the track.

If you are a big fan and car enthusiast you should visit carbibles.com where you can find useful and entertaining information about automobiles and more.