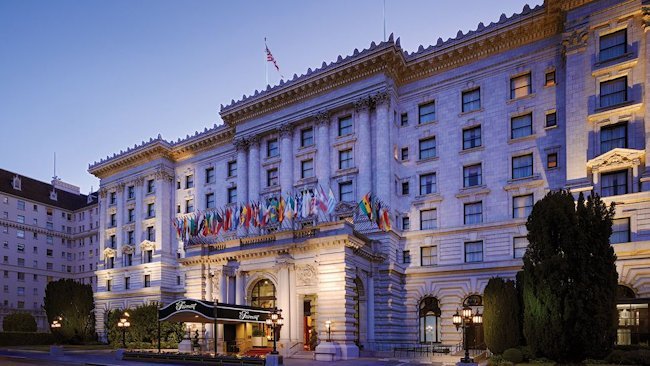 The Fairmont San Francisco's famed Diplomat Suite, Bennett's favorite "home away from home" suite, will now be dedicated to giving guests a one-of-a kind opportunity to experience luxurious accommodations characterized by elegant décor inspired by the world-renowned performer and his connection to the City by the Bay.

A just released new giclée print of one of Bennett's original paintings entitled “Golden Gate Bridge” will be launched during the anniversary weekend and will be available for purchase exclusively in San Francisco at The Fairmont San Francisco's Front Desk as well as through www.tonybennett.com.

In December 1961, Tony Bennett took the stage of The Fairmont San Francisco's famed Venetian Room and performed his version of “I Left My Heart in San Francisco” for the first time. His lauded rendition of the beloved song has generated worldwide adoration and nostalgia for the city and is one of its official anthems.

The spacious Diplomat Suite, one of The Fairmont San Francisco's renowned Presidential signature suites, is situated on the 22nd floor of the hotel's Tower Building and includes breathtaking views of the City and Bay that epitomize the visuals associated with song's wistful lyrics. The suite presents a quintessential San Francisco ambience that perfectly represents Bennett, who has served as an ambassador for both the City and The Fairmont San Francisco throughout the world for five decades.

A 17-time Grammy Award- winner, who has sold millions of records, Bennett is also a distinguished visual artist, with several of his paintings in the permanent collection of the Smithsonian Institution. His multifaceted artistic talent will be featured in the suite through three signed prints of his paintings, including the newly released giclée of the Golden Gate Bridge, which celebrates its 75th anniversary on May 27, 2012. The hotel will have a limited number of giclée prints of Bennett's Golden Gate Bridge painting available for purchase and is the only brick-and-mortar location in San Francisco where they will be for sale.

Guests and visitors alike will also be able to enjoy a new Tony Bennett wall display on The Fairmont San Francisco's lobby level near its historic Venetian Room. A special collection of Bennett's personal family and historic career photos, music memorabilia and three prints of his paintings will be featured. These exclusive items have been expertly arranged by Bennett's niece, distinguished Bay Area interior designer Nina Chiappa.

Bennett has returned to The Fairmont San Francisco several times to perform in the years since he debuted his signature song there. On February 14, 2012, the entire city of San Francisco celebrated “Tony Bennett Day” to mark the 50th Anniversary of “I Left My Heart in San Francisco.” Following a tribute at City Hall, where he received a key to the city, Bennett performed a special once-in-a-lifetime concert in the Venetian Room, to benefit the UCSF Division of Cardiology.

For more information on reservations for The Diplomat Suite and “The Tony Bennett Suite at The Fairmont San Francisco” package, please call 1-800-441-1414 or visit www.fairmont.com/sanfrancisco.