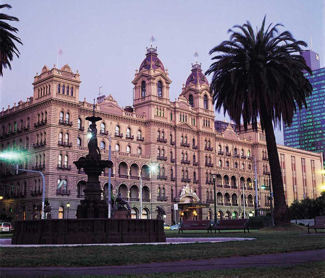 In a world where hotels often have a certain similarity in appearance and characteristics, it is a wonderful change to find a glorious old institution that is unique in its own country and rare in the world. Indeed, The Windsor, Melbourne, Australia, predates London's venerable Savoy, New York's Waldorf Astoria and the Ritz hotels of Paris and London. It is gracious, visually stunning, perfectly located and operates with a warmth and efficiency that is hard to find in modern, high tech hotels.

The only independent grand hotel in Australia, the Windsor has witnessed a great deal of history. When Australia broke away from British rule the nation's constitution was planned here and for more than 20 years it served as the hotel of choice of Australia's government until the new capital was built in Canberra. Virtually every prime minister has stayed here, together with entertainment stars including Sir Laurence Olivier and Vivien Leigh, Gregory Peck, Lauren Bacall and – more recently – Harry Potter star Daniel Radcliffe. Today's clientele is a mix of local and international business and vacation travelers and old-money Australians in town for a break from their farms.

The hotel is synonymous with history, and it is easy to spend an hour or so just exploring the public rooms and corridors and studying the fascinating old photographs on many of the walls. The towering staircase, which is listed for preservation by Australian Heritage, has discreet signs pointing out that the ancient handrails fail to comply with modern building specifications – they are a couple of inches too low. How to satisfy ancient and modern requirements is a balancing act that is currently holding up a major refurbishment.

Small by many standards, with just 180 rooms and suites, the Windsor is almost sinfully extravagant in the size of its public rooms and accommodation. A typical suite has an entrance lobby, large oval private lounge and dining room, a kitchenette, bedroom, bathroom and walk-in dressing room. Many of the suites face Parliament House – a sumptuous neo-classical building that houses the state's government. It is in the heart of the city's theatreland, and Chinatown is just one block away.

The main lobby is club-like, with overstuffed leather Chesterfields and a gentle hum of activity. The hum grows a little louder when you turn a corner into the Windsor's own 'pub' – the famed Cricketers' Bar. This is a wonderful place to sample a frigid Aussie beer or some local wine.

To the left is Restaurant 111 Spring Street, where Jérôme Trémoulet is executive chef. The Frenchman's signature dish is a duo of beef Wagyu bresola with Dijon mustard and modern tartare and confit of beetroot. Colleague Nigel Braithwaite is pastry chef, a position he held for three years at the Savoy, London. Nigel is in charge of the Windsor's afternoon tea, a very civilized ceremony involving English-style sandwiches, French pastries, scones with jam and cream and a selection of rare teas and a glass of sparkling wine.

Somehow hotel staff, under CEO David Perry, have acquired the trick of memorizing guests' names and associating them with room numbers. One staff member simply saw my electronic door key and said: "would you like me to show you to your room, Mr Edwards?" This is so much better than being addressed as a mere Sir or Madam, and this attention to detail is one of the areas where the Windsor keeps ahead of its more modern competitors.

Inevitably, a hotel created in 1883 to serve the beneficiaries of Australia's gold rush misses out on a few 21st century touches. There is no pool and no spa. But within moments chief concierge Ali Sungkar can have you whisked away to nearby establishments that rank among the best Australia can offer.