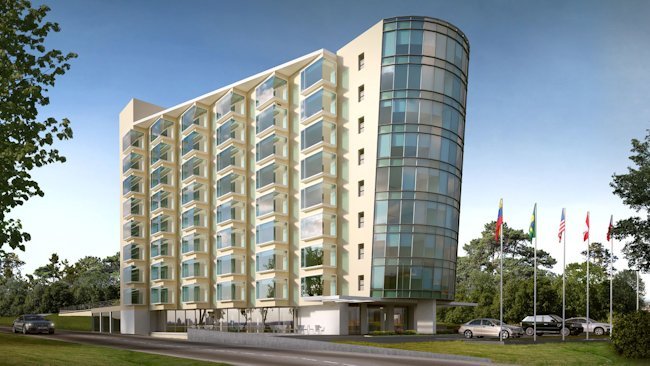 More than 600 guests mingled with celebrities and South America's elite while enjoying international fare and over-the-top entertainment offered throughout the evening.

The newest addition to this chic region, known as the Riviera of South America, The Grand Hotel is the first major five-star hotel built in Punta del Este, Uruguay in over 15 years. Situated directly on Brava Beach, one of the region's most beautiful beaches, and close to downtown, the 120-room property commands attention with its all-glass triangular shape, evocative of an ocean liner heading out to sea.

During the event, guests were greeted by official trumpeters, serenaded by famous tenors Esteban Hildebrand I and Nazareth Aufe from Buenos Aires' world-renowned opera house Colon Theater, and even delighted by a special performance from Latin American multi-platinum- awarded singer, Patricia Sosa.

Surrounded by top media and officials, and joined by the Sub Secretary of the Ministry of Tourism and Sports of Uruguay, Mr. Antonio Carambula, the General Manager of The Grand Hotel, John Irionda, participated in the traditional ribbon-cutting ceremony and commented on the special occasion. "A project of this style has four stages: first someone has to have a dream, and the energy and strength to carry it out; the next stage comes with the work of the architects and engineers who make it happen." He continued with, "the third stage which is where we are now is the opening of the property; and finally, the last and most important step, is to get the support of friends, guests and neighbors, to make The Grand Hotel an icon and a success in Punta del Este."