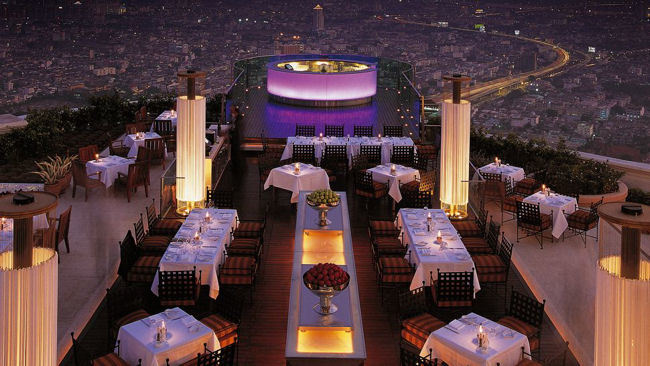 The Hangover Part II, an American comedy and the follow-up to the blockbuster movie, The Hangover, which made US$450 million at the box office, has been filmed extensively at lebua, the all-suite Luxurious Hotel in Bangkok. With its near 360-degree views of Bangkok, lebua was instrumental in setting the stage for the panoramic scenes seen throughout the much-anticipated movie being released worldwide from 26th May, 2011.

One of the chosen sites for many of the scenes was the Tower Club at lebua, and in particular the entrance to Sirocco, the world's highest open air rooftop restaurant on the 63rd floor. The backdrop for many of the scenes is the dramatic and amazing view of Bangkok's skyline which can be experienced from the renowned Sky Bar and Sirocco restaurant. Additional scenes also include lebua's famous golden Dome atop recently re launched Mezzaluna, lebua's modern and innovative haute eatery, where a helicopter appears in an all-action packed scene. The hotel was turned into a live film set and had a once-in-a-lifetime opportunity for many of their staff to be included as extras!

Now, lebua brings the fans of The Hangover an opportunity to be able to live the life of the characters from the movie with a special two-night Hangover Part II package priced at USD$ 2,200. Fans can also stay in The Hangover Suite, a three-bedroom luxury suite at lebua Hotel, which can accommodate up to six people and offers a fully stocked mini bar and ample space to party like the guys from The Hangover! Fans can also sample the Hangovertini, a special, signature cocktail made with green tea liquor, Martini Rosso, green apple juice, rosemary infused honey and priced at THB 490++ (approximately USD$ 19++) devised to commemorate the movie and get the party started! For reservations, please email resvn@lebua.com or call +66 (0) 2624 9555.

Rates start at $2,200 for two nights, based on double occupancy. Package is valid throughout 2011.