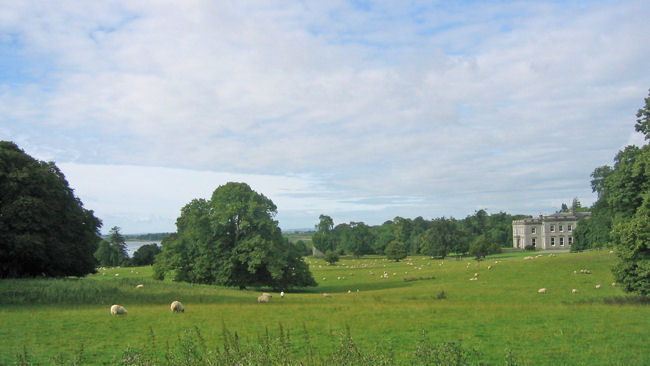 Annaghmore, Lissadell and Temple House. Three great neoclassical country houses resting at the foothills of the rugged mountains which trace the west coast of Ireland in an area forever associated with the poetry of William Butler Yeats. Built of stone which darkens from gunshot to charcoal grey in the persistent rain, each house has a deep Doric porch or porte-cochère for shelter from the prevailing wind. Austere elevations cloak rich interiors of unbridled indulgence. One house is private; one is open for guided tours; but only one accepts overnight guests. Enter Temple House (more about the other two later).

A member of the Hidden Ireland group of private country houses which offer bed and breakfast accommodation, Temple House is owned by the Perceval family. They have lived on the 1,000 acre estate for the last 340 years or so. The twelfth generation, the blonde dynamic duo of Roderick and his wife Helena, act as hosts and together with their suave French chef, cater for the every whim of guests.

The remains of the Percevals' original home now form a picturesque crumbling ruin nestled between the current Temple House and the lake. It was a castle built in 1216 by the Knights Templar who were later to be immortalized in Dan Brown's pot boiler The Da Vinci Code. 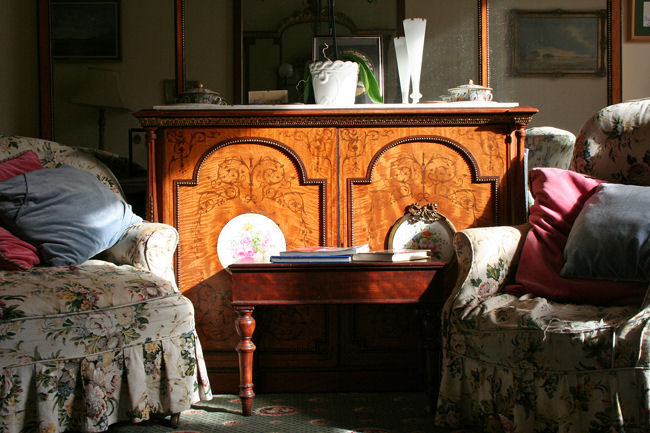 Most people have difficulty finding enough space in their homes to store all their belongings. This is not the case for the Percevals. With dozens of rooms and miles of corridors lit by hundreds of windows, they never have the excuse that there's nowhere for visitors to stay. So they have turned this potential problem into an asset. Now guests can recline in splendor in one of six first floor bedrooms. "We enjoy sharing this gem,' confides Roderick.

Not all guests pay for their accommodation. "The most persistent ghost is Nora," relates Helena. Nora, otherwise known as Eleanora Margaret Perceval, was the châtelaine of Temple House in the Roaring Twenties (although here in windswept rural County Sligo the era was more about fires than flappers). A favorite haunt of hers is the Blue Bedroom. Her best friend was Lady Gaga, wife of Sir Henry Gore-Booth, who lived at nearby Lissadell. Another ghost, this time a male, has been glimpsed at twilight sitting at the writing desk in the guest bedroom corridor, scribbling long forgotten letters under the purple patchwork of reflected light from the etched windows.

Helena continues, "The part of the house we use as family accommodation was derelict when we moved in. It used to have a very distinct atmosphere… a little unnerving… but this has mellowed in recent times." A visiting American psychic found the house to be riddled with ghosts. "She even spotted a few knights lingering in the castle ruins," smiles Helena. 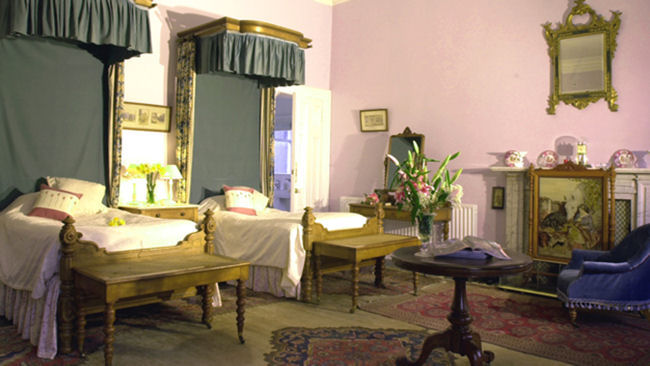 Temple House wasn't always as massive. In 1825 Colonel Perceval commissioned a relatively modest two storey five bay wide house to be designed and built by John Lynn. Its porch is clearly discernible in the current side elevation. The family moved into this house while the servants continued to live in the castle. But just 33 years later financial difficulties forced the Percevals to sell up.

Not for long. A knight in shining armor soon came riding back to save the day. The third son of the Colonel, Alexander Perceval bought back the estate in 1863. "Not large enough!' Alexander declared when he first set eyes on the new aggrandisement plans for the house. He had made a fortune trading tea in Hong Kong before splashing out three quarters of a million pounds on rebuilding his ancestral home.

In 1865 he added a three storey L shaped block directly behind the façade of the Colonel's late Georgian house, designed by the English firm Johnstone & Jeanes. The longer arm of the mirror image L stretches across the seven bays of a repositioned entrance front. The tip of the short arm adds a top storey to the middle of the garden front. On the entrance front the attic floor hides behind a heavy balustrade which wraps around the side of the house like a colossal stone tiara. One year later Alexander was dead. His presence lives on in dashes of Chinoserie throughout the interior. Alexander's son went on to marry Charlotte O'Hara who lived at nearby Annaghmore. 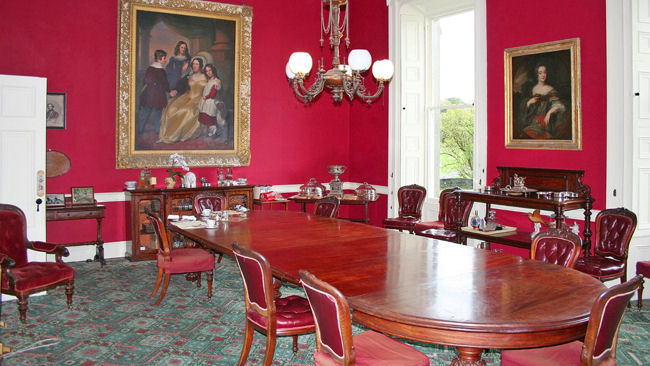 The inside of the L forms two walls of a courtyard. A long low service wing completes the other two sides. This inner sanctum, devoid of distracting decoration, displays a strange and abstract beauty, its sheer silver grey walls pierced with diamond paned windows. In contrast, form doesn't always follow function on the outer envelope. In the dining room behind the majestic Victorian portrait of Jane Perceval (Alexander's mother who died in the Great Famine) is a false window with the sole purpose of maintaining the harmony of the exterior.

"We believe each generation should leave its mark on the house," relates Helena. "We've painted the dining room a rich ruby red using an authentic Farrow & Ball paint." It used to be an insipid pea green. "Next is the staircase hall. We've identified a specific blue in the cornice which we hope to use for the walls. After that will be the sitting room. Perhaps ivory or off-white."

Upstairs a rather more relaxed approach has been taken to the fragile interiors. "The Twins Bedroom hasn't been decorated for 100 years," laughs Helena, "but that's a good thing at Temple House!" Signs next to the pair of tall sash windows request guests not to pull the curtains. They'll fall down. When the shutters are closed at night no light penetrates the bedrooms anyway. 'Temple House boasts rooms of enormous proportions," comments Roderick. One is called the Half Acre Bedroom. "Yet there's a real sense of intimacy here too.” 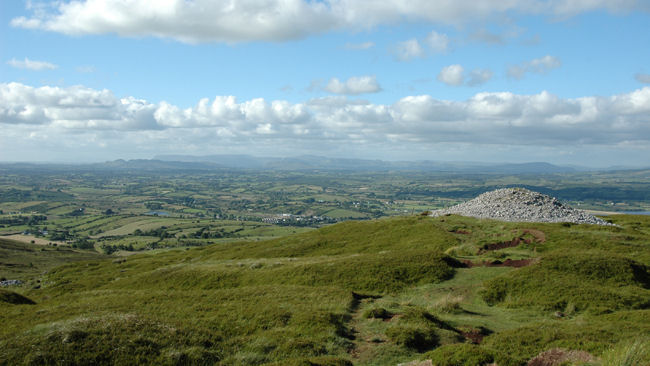 "The first guests we catered for were one challenge which we met and are now adept at," he says. "We love having groups of friends to stay. Then hosting our first wedding party was the next challenge. This year we organized the first ever Temple House Festival." Sponsored by Tennents and Bacardi, this festival of the arts and music is set to become an annual fixture on the estate's calendar.

Irish country houses are increasingly flinging open their doors to the public as recession triggers innovative ways of making owners ensure estates pay for their upkeep. Ireland's Blue Book is another association of country houses which also includes historic hotels, castles and restaurants.

Once the bastions of the privileged few, for centuries Irish country houses were hidden away behind high stone walls and locked cast iron gates, their existence barely acknowledged beyond a mile or two’s radius. Now, anyone can experience their otherworldly faded grandeur without the responsibility of their unwieldy financial upkeep. 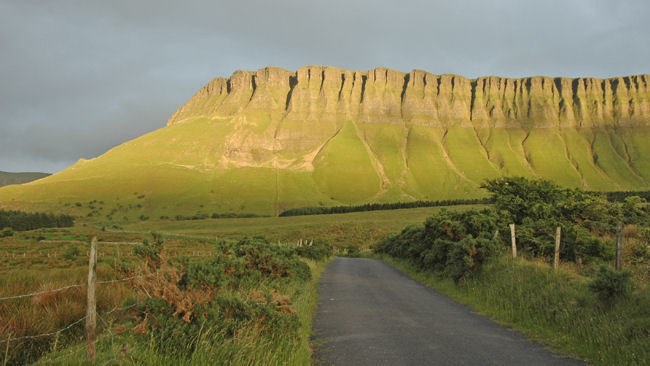