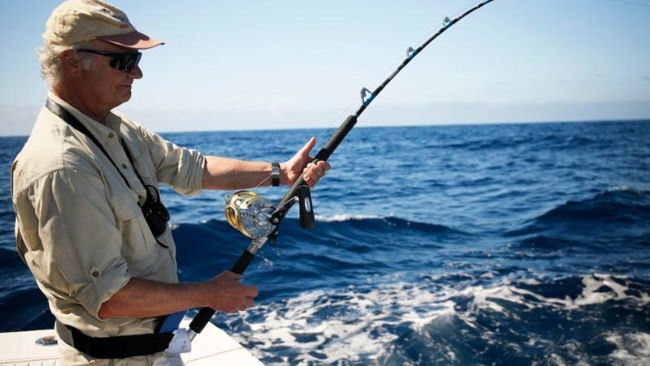 King Carl Gustaf practiced one of his lifelong hobbies, sport fishing, together with his entourage. As part of his agenda, the King met with local marine biologists and entrepreneurs to learn about the success story of Los Cabos combining fishing and tourism in a sustainable way.

His Majesty's visit was inspired by the popular Swedish documentary, "The Old Man and the Sea - The Expedition," where Solmar's founder, the late Don Luis Bulnes, played a key role being a strong supporter of the project even during its early stages. The Martin Falklind documentary depicts an adventurous journey as two friends follow in the footsteps of Hemingway going Marlin fishing off a kayak. Recreating the narrative, Falklind, the filmmaker, accompanied the king in search of a marlin in the abounding waters of Los Cabos.

King Carl Gustaf, the Honorary President for the World Wildlife Fund in Sweden, has long been interested and active in the long-term health of our oceans and conservation of marine life, with projects that include the protection of salmon and improving the potential of Sweden as a sport fishing nation. His Majesty looked to Los Cabos as an inspiration of a thriving tourism destination relying on the sea for its livelihood. One of the visit's goals was taking back valuable knowledge to position sustainable sport fishing as a mean to create growth, employment and investment in his country- a goal similarly shared and achieved by Don Luis Bulnes.

The Solmar legacy dates back to the 1950s when Don Luis, a young tuna cannery manager, embarked on an adventure of his own as he built the area's first sport fishing fleet and later a five-property hotel collection, putting Cabo on the tourism map. Mr. Bulnes was also an advocate of sustainable fishing and founder of the Mexican Billfish Foundation.

As part of his stay, King Carl Gustaf enjoyed a variety of fishing expeditions, from navigating in small pangas to fishing aboard a large big game boat with the namesake of Don Luis. During his stay, the King was delighted to catch a striped marlin, which was tagged and released.

Taking advantage of prime whale watching season in Los Cabos, his Majesty also participated in a whale watching excursion. Another highlight of his trip was snorkeling with whale sharks in La Paz.