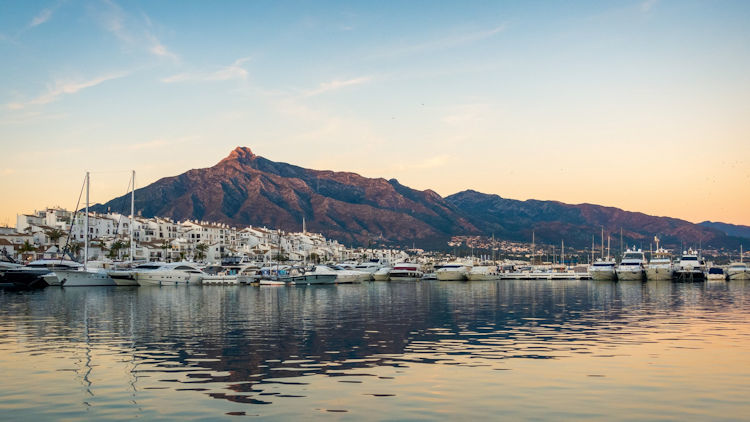 Considered a playground for the discerning traveller, Marbella is seeing a notable influx in luxury development, with investments from some of the world’s leading hotel groups, major real estate firms and commercial property developers set to top one billion euros over the next few years.

NEW LUXURY HOTELS, VILLAS AND A SUSTAINABLE SHOPPING CENTER
World-renowned brands like Hilton and Hard Rock Hotels will join recent openings from the likes of Nobu Hotels, Anantara and Ikos next year, to solidify the region’s reputation as one of Europe’s finest luxury destinations.

Opening in Summer 2022 is the new Hard Rock Hotel Marbella, previously the Andalucía Plaza Hotel. The property has undergone a complete transformation to bring it back to life with Hard Rock Hotel's signature bright and eclectic style. Elsewhere, the iconic Club Med will return to Spain after more than 20 years, with its new 14-acre resort, Club Med Magna Marbella. And not to be left out, Hilton is also strengthening its presence in the area with a new Conrad hotel near the glamorous Puerto Banús – the Conrad Costa del Sol Hotel.

In addition to the recent boost to tourism, the luxury property market in Marbella continues apace, as the talented and savvy realise that they now have the flexibility to work in any location or postcode. From spectacular beach-facing standalone villas to sophisticated serviced residences in the hills like EPIC Marbella, an ensemble of villas decorated by prestigious interiors brand FENDI Casa, and the new luxury residential project Breeze Marbella, located only steps away from Guadalmina Golf Course, Marbella has something for every taste.

Shopping enthusiasts will be delighted to learn that British developers Citygrove and Burlington are behind plans to create a 100-million euros open-air shopping complex close to Plaza de Toros. Conceptualised with sustainability in mind by the prestigious New York architecture studio KPF, the new high-end mall will house well-known retailers, with major international brands landing in the area for the first time.

AN UNRIVALED DESTINATION
More than just a mere travel trend, the roots of Marbella run deep. Stretching out languidly west of Málaga, this sun-drenched haven on the Costa del Sol has long been seen as Spain’s answer to the French Riviera. Its tourism history is storied: the beaches were first developed nearly a century ago. After the Second World War, Spanish aristocrats recommended the village of Marbella to the burgeoning international jet set, and then of course Prince Alfonso of Hohenlohe-Langenburg, who founded the Marbella Club, began inviting his contacts in high society, including Ava Gardner and Kim Novak.

Throughout the 20th century, Marbella became a location synonymous with high-end living, as travelers of a distinctly stylish sort washed up on its sun-kissed shores, cultural icons such as Audrey Hepburn, Cary Grant, Grace Kelly, and Brigitte Bardot. Decades went by and the glamour momentum continued. The region continues to attract the international jet-set, thanks to its outstanding sports facilities, luxury accommodations, a plethora of high-end residences, four major yachting marinas, wellness clinics and 27 kilometers of a fine golden sand.