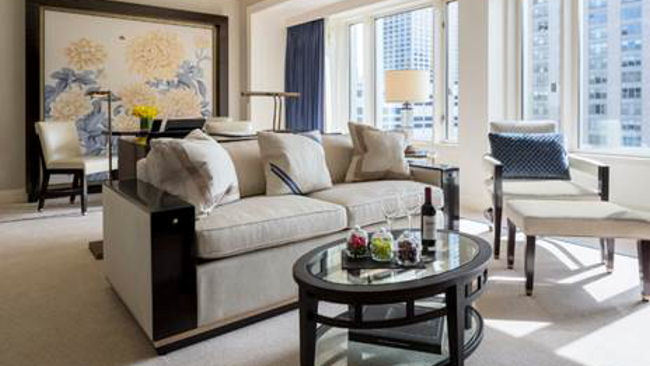 The re-imagined rooms and suites introduce the brand's advanced guest room technology to the United States, along with three new service initiatives: 24-hour check-in for web bookings, a Mobile Concierge service and Keys To The City – 15 programs offering special access to Chicago's best destinations and experiences. Encompassing 331 guest rooms and suites, the project showcases The Peninsula's evolution of luxury design and enhances every guest's stay with ease, elegance and the ultimate in personalization.

Designer Bill Rooney of Bill Rooney Studio, Inc., conceived contemporary interiors with cosmopolitan attitude in keeping with The Peninsula's prime location in the heart of Chicago. Mr. Rooney took design cues from luxury yachts: fine wood finishes, lush fabrics, rich leathers, and a sense of purpose where everything has its place.

All of this pioneering technology has been developed by The Peninsula Hotels' Research and Technology Department. Based in Hong Kong, the group has been responsible for some of the most advanced, yet intuitive innovations in the global hotel industry since 1985. The team flew more than 250,000 miles during the installation of the new system to ensure a truly seamless experience for guests. Linking each guest room in the hotel is high tech cable stretching over 1 million feet, which equates to 191 miles of the fastest connection available.

In honor of The Peninsula Chicago's 15th anniversary milestone in June 2016, the hotel's crystal anniversary, the 15th Anniversary Celebration Package is offered in partnership with LALIQUE. The experience includes:

New Keys To The City Experiences

To celebrate its new guest rooms and 15th anniversary, The Peninsula Chicago offers guests unprecedented access to the very best of Chicago through 15 curated experiences called Keys To The City. In addition to the previously announced programs that include a private kitchen tour at the three-Michelin-star restaurant, Grace; guaranteed house seats and access to the VIP intermission lounge at Broadway in Chicago performances; nine new experiences and perks have been added in May 2016. Highlights include:


To reserve a new Peninsula Chicago guest room, please visit chicago.peninsula.com . Room rates start at US$ 430 and suites start at US$ 680. Guests who book through peninsula.com may now check in at any time on their arrival day, through the new 24-Hour Check In for web bookings feature online.

The Peninsula Chicago is a Five Star, Five Diamond hotel located on the “Magnificent Mile” at 108 East Superior Street (at Michigan Avenue), within the city's premier shopping district. The 339 guest room hotel opened in 2001 and features three distinctive restaurants, a popular bar and a world-class spa. For information on The Peninsula Chicago, please visit chicago.peninsula.com or call +1 (312) 337 2888 or toll-free at +1 (866) 288 8889.
Like Us
Facebook
Follow Us
Twitter
Follow us
Instagram