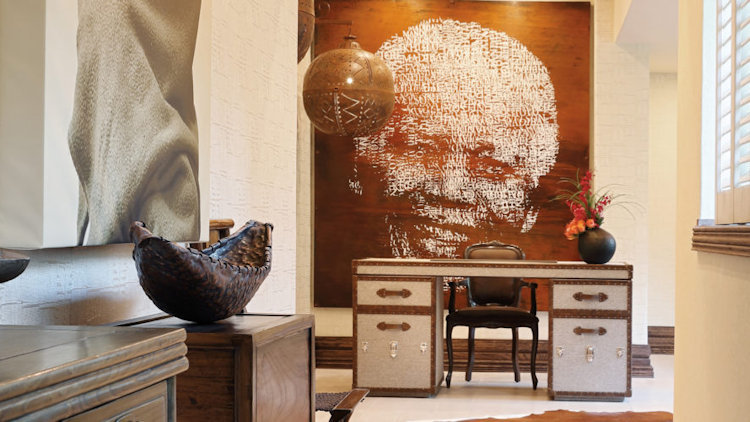 The Saxon Hotel, Villas and Spa in Johannesburg’s Sandhurst neighborhood has unveiled the newly renovated Nelson Mandela Platinum Suite, in honor of the late president and philanthropist. The stylish new suite is a fitting tribute to the statesman who was closely connected with Saxon owners, the Steyn family and was also a regular guest of the hotel. Mandela completed his bestselling autobiography Long Walk to Freedom at the Saxon following his release from prison.

Johannesburg artist Dean Simon, whose pencil sketches embellish the walls of the Saxon including several well-known pieces of the late former president, was tasked with the complete redesign and renovation of the existing Nelson Mandela Suite. Taking inspiration from Mandela’s heritage, Simon has created a striking new suite featuring bespoke pieces of art and furniture with an authentically African look and feel that takes the guest on a journey through Mandela’s life, from his days as a young militant through his years as a wisely statesman.

In keeping with the distinct African theme, the suite is heavily adorned with dark wood, animal skin rugs, authentic cooper lamps and geometric African patterns running through the soft furnishings. The architraves and doors are decorated traditional carvings with images of crocodiles, lizards and birds, which are symbols of protection and good luck.

The suite features a number of notable pieces of original artwork including:

• A portrait of Nelson Mandela in the entrance hallway, which from a distance looks like a traditional portrait, but as the eye meets the artwork closer, the face fragments into a series of words used to describe the former president including Madiba, the clan name for the Mandela surname; Rolihlahla, Mandela’s isiXhosa birth name; and Mandela.
• An eye-catching statue of a bound figure by Dean Simon in the passageway of the suite entitled ’27 Years.’ Made entirely from washers, the statue represents Mandela’s incarceration and eventual freedom 27 years later.
• The Dean Simon designed screens dividing the lounge and dining area which were created from flat vertical cut steel strips that form the face of Nelson Mandela. The face is only visible from certain angles at different times of day, depending on the light, creating the feeling that the former leader’s presence is in the room.
• In a nod to Mandela’s early years, there are three vintage, archival photographs in the entrance that depict different aspects of traditional, native South African Xhosa life entitled The Wise Chief, The Warrior and Mother and Child. Each photograph portrays what life would have been like for the young Mandela before he left for the city.
On launching the new Nelson Mandela Platinum Suite, Managing Director George Cohen comments, “It has always been an honor for us at the Saxon to have had this connection with Madiba, and we are delighted to be able to acknowledge this with the design of the new Mandela Suite.”

The launch of the newly transformed Nelson Mandela Platinum Suite is part of an ongoing renovation program throughout the Saxon, which included the new Saxon Spa in 2016, the hotel’s suites in 2017 and fine dining restaurant Grei in 2018. The renovations will continue into this year.