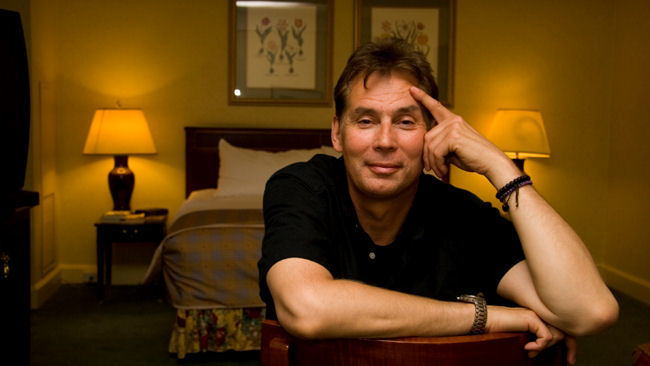 You've been a celebrity biographer, so how did it come about that you wrote a book about Hotels?

Throughout my career as a celebrity biographer and interviewer on television I had the occasion to be in many fantastic hotels the world over talking to movie stars and many of them were hotel residents themselves, so in a very real way the research and writing of the book is fifteen years in the making.

It has been a lifelong dream of mine to live the life of an author in a big old hotel – and for the last couple of years I have been doing exactly that. It was while living at The Fairmont Royal York in Toronto that I finally and most appropriately got to write the book I have always wanted to write The Suite Life – The Magic and Mystery of Hotel Living (my previous eight books were biographies of movie stars and filmmakers).

Why did you choose to focus on The Fairmont Royal York hotel in Toronto?

In Toronto, when looking for a location to shoot and interview, I was invariably set up in The Fairmont Royal York because of my level of comfort there and how extraordinarily good the staff are at helping to organize such things.

I live and have had a lifelong professional and personal relationship with the magnificent Fairmont Royal York in Toronto. It seems that I have always felt drawn to the Royal York, always felt very comfortable here – it wasn't until later in life that I found out this pull was almost cosmic in nature as I was literally conceived in this very hotel. So when the harmonic convergence of events saw to it that I could not only live my dream of living in a big old hotel, but double the dream by writing a book about hotel living and hotel culture, there was no other hotel I could have possibly imagined doing it in but the Fairmont Royal York, one of the greatest of the classic hotels in the world.

What celebrities did you interview for this book?

Part of what I wanted to explore with the book was why, down through the eras, writers and artists and musicians gravitated towards hotel life, to do that I spoke with a number of high profile people who themselves were also long term hotel residents.

One such interview involved action star Jackie Chan. Chan was shooting his film The Tuxedo in the Royal York Hotel so I spent an afternoon with him in a suite – our conversation involved my asking him to demonstrate how he choreographs his fight scenes and I volunteered myself as his opponent in the demonstration. It went well for a few minutes then I took a wrong step forward at the wrong time and was on the receiving end of a solid punch to the head. Jackie Chan was very upset as was his assistant and the film company liaison but I kept assuring them that I was delighted – who else could boast of being slugged by Jackie Chan during an interview? It was a unique moment, but one a many hundreds of thousands of them that have unfolded within these walls.

Warren Beatty, who lived in the Beverly Wilshire Hotel in Los Angeles for ten years, told me that he liked the order and neatness and lack of clutter of hotels and also liked the fact that when inside the hotel his privacy was not just protected but respected as well.

Both Johnny Depp and Keanu Reeves lived in the notorious Chateau Marmont in West Hollywood, Depp for four years, Keanu on and off for more than sixteen years (Reeves has never owned a private residence in Los Angeles). Johnny Depp, who I have written two previous books on, loved the convenience of hotel living and told me he loved the big old Chateau Marmont because it felt like he was living in a big house belonging to a relative. Keanu Reeves echoed the sentiment when telling me that because he is on location so often that he is really only comfortable living in hotels, the rhythm of hotel living is all he knows and he referred to the Chateau Marmont as "an old friend."

Shortly before his death actor Richard Harris treated me to many stories about his twenty year live-in experience at the fabulous (and recently renovated and re-opened) Savoy Hotel in London, including a story about being given a gift of a Rolls Royce from an American movie producer – Harris didn't need or want the car so he had a Savoy valet park it for him. Harris promptly forgot about it and many years later when a hotel employee asked what he wished done with the item they were storing for him, he had no idea what the item was he was referring to, he simply said, "Whatever it is, do what you want with it, if it is something you want, it is yours."

What is the appeal of living in a luxury hotel?

What every actor I spoke to about hotel living told me in one way or another was that the basic appeal of the life is that it removes much of the minutiae of daily life thus allowing the artist the time and space to focus specifically on work. After moving into the Fairmont Royal York I found that to be exactly true. My first book was published in 1997, when I moved into the Royal York in the late spring of 2009 I had written six books. During my time in the Royal York I have already written three complete books, two on release all over the world currently and The Suite Life out soon. The level of comfort and serenity I have felt within these walls translated into the most intensely productive period of my professional life and that productivity shows no sign of abating any time soon.

Another part of the appeal of hotel living for the artist, especially the writer, is the exposure to so many different types of people and experiences on a daily basis. Just three days ago I was walking back in through the beautiful grand lobby of the Royal York, at the east end of the lobby I ran into the current Playboy Playmate centerfold model who was in town to sign autographs, by the time I got to the main entrance area of the lobby I was just in time to see his Holiness the Dalai Lama bounding into the Royal York, waving and greeting the hushed people riveted by his presence. Helen Mirren, Bruce Willis and John Malkovich spent a good deal of time in the Royal York shooting their film RED as did Katie Holmes and Greg Kinnear when shooting their film The Kennedys in the hotel, it was not uncommon to see Katie's husband strolling through the lobby with a baseball cap and sunglasses on – Tom Cruise.

So really, what would be considered extraordinary anywhere else becomes routinely commonplace inside a hotel like the Fairmont Royal York. This is a place where magic and mystery are all around you all the time – you don't have to go looking for it, when you are here, it envelopes you.

When will the book be released?

"The Suite Life: The Magic and Mystery of Hotel Living" will be released in early 2011 - the edit is being finished now.