The Waldorf Astoria: Still 'Wow' After all These Years 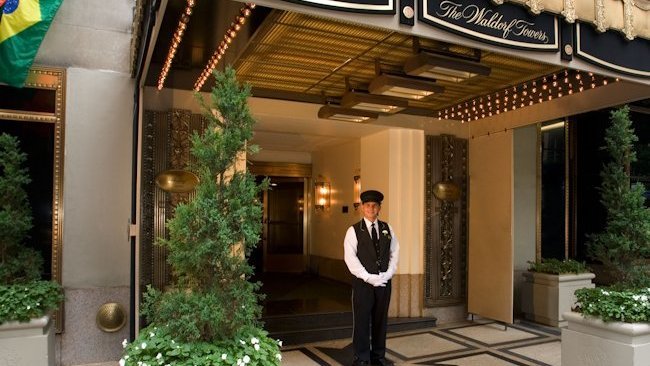 Spanning the city block between Lexington and Park Avenues and 49th and 50th streets, the Waldorf Astoria is both a landmark and a love story between a city and her hotel, described as “The Greatest of them All” by legendary hotelier Conrad Hilton.
Since its beginnings in the 1890s as two neighboring hotels on the site of what is now the Empire State Building, the Waldorf Astoria has been at the heart of many a New York moment for visitors and locals alike.

Moments such as eating red velvet cake, Waldorf salad or veal Oscar. Moments such as clicking across the restored Park Avenue lobby in evening gown and heels, marveling at the Art Deco finishes and fabulous “Wheel of Life” floor mosaic by Louis Rigal. Meeting a friend at the Clock Tower in the main lobby. Or ducking into the famous ladies room, complete with attendants and in-lavatory vanities. 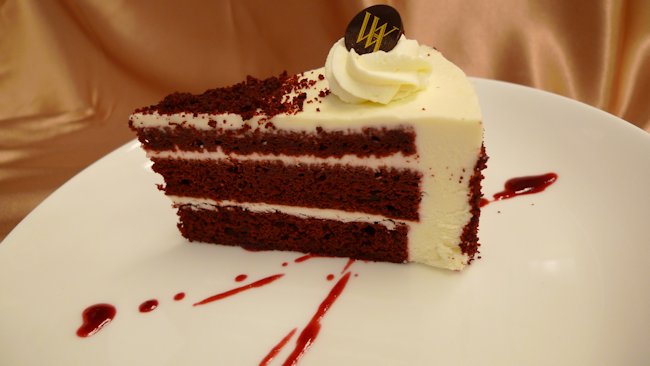 Even a visit to the storied lobby–abuzz with activity from the Peacock Alley bar and restaurant, registration desk, concierge station and shops all connected by a grand promenade the length of the hotel–is the perfect excuse for people-watching and musing on the glittery lives that have gone before.

Today's Waldorf Astoria, part of the luxury Hilton Worldwide brand and flagship of Waldorf Astoria Hotels & Resorts, carries on the grand tradition of an important New York hotel, with a modern sensibility that works. With 1,235 rooms, including 208 one-bedroom suites, there is indeed something for everyone. And the boutique hotel within a hotel, the Towers of the Waldorf Astoria on floors 27-42, with 181 accommodations including 123 suites, takes care of those who prefer “exclusive” over “everyone.” 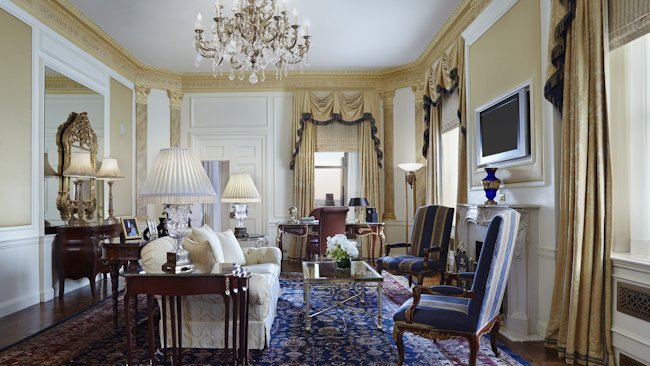 The experience at the Towers begins with advance arrangements by hotel employees to assess the needs of each guest. A suite specialist is on hand to coordinate a match with the best room or suite (none are alike; indeed no two rooms in the entire hotel are alike). A guest's arrival can then be as seamless and private as possible, with entrance to the revamped interior motor court and private elevators to the suites. A Towers-only fitness center features personal training and classes.

Perhaps your travels will land you in The Penthouse, filled with certified antiques and rooms available for multiple configurations with a stunning view of the Chrysler Building; the Royal Suite, named for the Duke and Duchess of Windsor, or the Presidential Suite, which has hosted every U.S. chief executive since 1931. Should you pass 24-hour security detail on floor 42, you're in the vicinity of the permanent suite of U.S. Ambassador to the United Nations.

Hallways are lined with photographs of famous people who have crossed the threshold. The threshold is, in fact, a destination in itself. The Park Avenue entrance and lobby are flooded with daylight as a result of a recent restoration, while a new grand chandelier with Lalique surround seamlessly blends modern craftsmanship and historically precise restoration. The exterior canopy was replaced to highlight the original Waldorf grillwork and Spirit of Achievement statue by Nina Saemundsson. Want to know more? Tours are offered twice weekly (doesn't every hotel have its own tour?), and archives displays throughout the hotel offer fascinating glimpses of history. 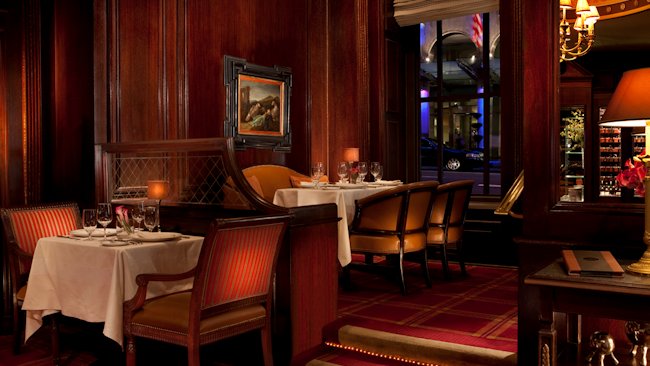 As famous as the Waldorf's guests have been, so too is its culinary history. Several dishes can claim origination or popularization at the hotel. Visit any of the hotel's restaurants, but particularly Bull & Bear Steakhouse, for a fine dining adventure and an edible taste tour. Among the classics:

• Red velvet cake, served dobash style in multiple layers with cream cheese and mascarpone frosting. And who knew that the secret ingredient that gives the dessert its namesake color is actually beets?
• Waldorf salad, presented in a contemporary pile of julienned apples topped off by a dried apple ring, with candied walnuts, celeriac and truffle.
• “Oscar style” anything, the steak topping named for the longtime maitre d'hotel
Oscar Tschirky.

The Waldorf Astoria's Midtown berth and easy access to points north and south via foot, bus, taxi or town car make it a great place to pack in a lot of activities in a day. Exhausted yet? The hotel has taken care of that too, with the gorgeous Guerlain Spa on the 19th floor, a luxurious escape from the demands of the world's second most populated city. Enjoy your treatment in the privacy of your own spa suite. Take a shower, sip Champagne and nibble on a chocolate afterwards. Post-treatment complimentary makeup touchups are also offered so that you leave the spa feeling relaxed, polished and ready for the rest of your stay. 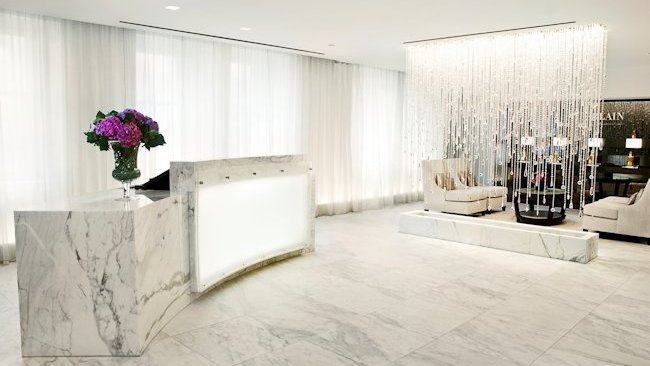 A recent visit to the hotel coincided with a business trip, all the better to experience the hotel's many charms. Sitting in the elegant Empire Room for a meeting, breaking for lunch in the Adam D. Tihany designed Oscar's restaurant, quaffing cocktails and nibbling on chic small plates in in Peacock Alley (named for the alley between the two original hotels, filled with fashionable swells)Â¬–how fun it was to call the Waldorf Astoria home for a few days. And even without the business excuse, would we return?

In a New York minute.