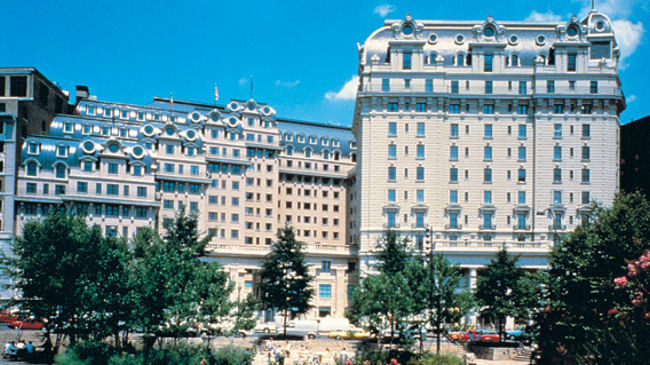 Designed to cater to the nearly 12,000 children the hotel welcomes annually, the Kids Concierge service aims to ease the stress of family travel as well as enhance the family experience both at The Willard and in Washington, D.C. Tailored to children 11 years and younger, with a pre-teen/teen-centric service debuting this fall, The Willard's Kids Concierge offers a selection of amenities and activities to ensure that even the youngest of guests have a luxury experience to remember.

The Willard marks the debut of the Kids Concierge with the unveiling of the program's official mascot, Millie the Mallard. Every spring, a duck named Millie takes up residence in a flowering pot in the courtyard of The Willard to lay her eggs. For roughly a month Millie sits and waits for her ducklings to hatch before migrating a few blocks south to the National Mall. Millie's annual tradition, which began roughly a decade ago, is something the Willard celebrates as a unique aspect of the hotel and as such has woven her into various aspects of the Kid's Concierge service.

As one of few hotels in Washington, D.C. that offers a Kids Concierge, this service will be led by Kids Concierge Brian Thomasson, a concierge at The Willard for over four years and a father of two. It will provide families with the resources needed for a seamless stay. Prior to arrival, families are contacted by Brian to identify in-room amenities needed, such as a crib, stroller, rollaway, microwave, etc. Additionally, a list of family friendly activities and restaurant options tailored to the child's age is provided.

Upon arrival, The Willard welcomes their youngest guests at check-in with a welcome packet for each child containing a “Duck Buck,” a Millie Mile Adventure Map, a personalized Library Card as well as a Treasure Chest Card. A complimentary in-room dessert amenity that caters to either the sweet tooth or health conscious will also be offered.

Throughout their stay, children have the opportunity to earn “Duck Bucks” to be redeemed at Café du Parc's ice cream cart. Aside from receiving one at check-in, other ways of acquiring “duck bucks” is through the rental of a book from the hotel's Children's Library, a board game rental from the Willard Treasure Chest, as well as completion of the Millie Mile Scavenger Hunt found on the Millie Mile Adventure Map, an activity created to provide families with the chance to explore some of the city's most notable attractions within walking distance of the hotel.

The Children's Library offers young guests the chance to borrow a book during their stay. The Willard consulted with popular Washington, D.C. bookseller Politics and Prose to assemble a children's library with books revolving around the theme of “America,” highlighting various individuals and events that shaped the nation's history. The Willard also selected titles about specific historical figures in a way to educate guests on the famous figures that have played a role in the hotel's past. Using their library card, children are invited to checkout a book, one at a time, and are able to collect a “duck buck” upon its return.

Children are also welcome to borrow a board game from the Willard Treasure Chest. Games include Scrabble Jr., Connect4, Guess Who, Jenga, Uno, Chess, Checkers, and Twister just to name a few. Like the Children's Library, guests are able to rent one game at a time and are able to earn a “duck buck” upon its return.

Another activity offered through the Kids Concierge is a History Tour of the Willard. In light of the hotel's nearly 200 years of history and the role it has played in not only D.C. history but that of the United States, Director of Uniform Services Steve Blum, Kids Concierge Brian Thomasson, along with members of the Concierge Team, will lead family-friendly tours of the hotel's property on Saturdays at noon. Tours will provide an overview of moments in history that have occurred at the hotel as well as shed light on the many famous figures of the hotel's past including but not limited to Abraham Lincoln, Ulysses S. Grant, Mark Twain, Jenny Lind, Roald Dahl and Martin Luther King Jr.

Every year, Washington, D.C. welcomes an average of 20 million visitors, many of which are families. “Here at the Willard InterContinental, we empathize with the complexity that can exist in organizing family travel,” says Patrick Birchall, General Manager at The Willard. “Through services like the Kids Concierge we aim to partner with parents in facilitating the creation of a memorable trip for the entire family. We have welcomed generations of families over the past 150 years and look forward to continuing to deliver the Willard experience for generations to come.”