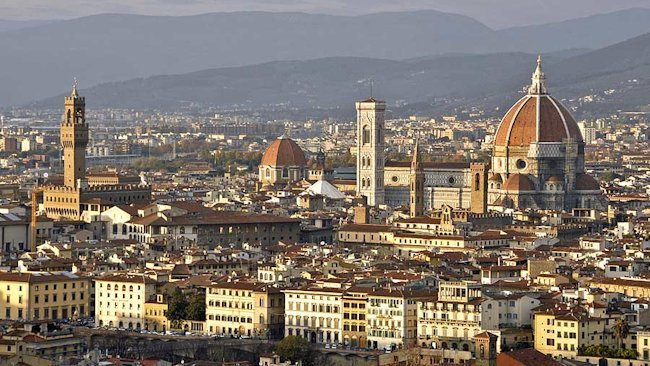 The study, conducted in conjunction with the Luxury Institute in New York, surveyed more than 1,200 individuals from U.S. households with incomes of $150,000 and higher. The top 10% of American households now control 74% of the country's wealth and account for nearly 50% of U.S. consumer spending today.

"Italy offers a wide range of the most-desired activities and experiences sought by luxury travelers," says Chris Fair, President of Resonance Consultancy. “Whether dining at exclusive restaurants in Rome, tasting their way through the vineyards of Tuscany, or exploring the country's numerous art cities and historic landmarks, Italy is the ideal destination for upscale cultural, creative and culinary tourism."

The study found that 76% of men and women said that dining out is currently their favorite vacation activity, while 56% seek out local sights, culture and landmarks. Touring wine country is the most desirable vacation experience for affluent American travelers. “While wealthy women enjoy more activities than men on vacation, significant numbers of males were interested in activities associated with wine,” says Resonance Consultancy Executive VP Richard Cutting-Miller.

According to the UNWTO, Italy ranks fifth in the world in both international arrivals and tourism receipts. The country experienced a tourism slump in 2009-10, but rebounded in 2011, with 5.7% year-over-year growth in arrivals. The U.S. is the second-highest country of origin for Italian visitors, behind Germany.

According to the survey, the Top 10 international destinations for luxury travelers are:

The United Kingdom, Canada and Australia all moved up in Resonance Consultancy's rankings in 2012. “While this may, in part, be a result of Summer and Winter Olympic afterglow for London and Vancouver, we also believe this result indicates travelers' desire for stable and predictable destinations,” says Fair. Safety ranked high in luxury travelers' destination decisions, with 41% citing it as a key factor. The top vacation type indicated by affluent travelers was a family trip, and all three countries – in addition to being safe – are renowned family destinations. Troubled Greece and Ireland, popular in 2008, dropped out of the top 10.