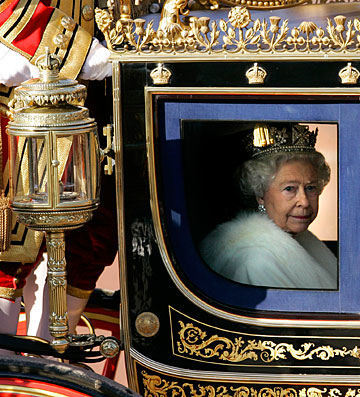 If you don't catch a glimpse of Her Majesty while she's in the U.S., there is always a chance of spotting her in Britain – if you know where to look. VisitBritain.com, the national tourist board for England, Scotland and Wales, highlights the top 10 spots American travelers might spot the Queen on their next trip across the pond.

Buckingham Palace - London, England
Buckingham Palace is not only a London landmark but the official London residence of the British monarch. Nineteen state rooms of the palace are open for public viewing each summer, from late July through early October, with complimentary audio tours. Visitors to the palace should be sure to keep their eyes peeled; Her Majesty has been spotted strolling the gardens with her Corgi dogs and is known to enjoy a sneaky peek at visitors admiring her home.

Windsor Castle - Windsor, England
Just a quick jaunt by train from London, Windsor Castle is one of the Queen's official residences and where she spends most weekends. Open year-round, visitors have been known to spot the Queen through the windows overlooking her garden. Locals have also said they often see Her Majesty the Queen and the Duke of Edinburgh departing down the long driveway in Windsor Great Park. Your chances go up if you visit around Easter, when she takes up residence for a month.

Anglesey, Wales
The chances of spotting the Queen in Wales are on the rise with Prince William, her grandson, training in Anglesey to become a search and rescue helicopter pilot. Prince William is said to be enjoying his time there, taking in the beautiful Welsh scenery as he flies over Snowdonia National Park. He has also been sampling the local cuisine – including an Anglesey burger van, 'The Flaming Grill,' that he loved so much he gave them the Royal Seal of Approval.

Balmoral Estate - Aberdeenshire, Scotland
One of the monarch’s favorite summertime retreats is Balmoral, set amongst the magnificent scenery of Royal Deeside. Here you might spot the Queen as your neighbor – as you can take up residence on the same property where the Queen stays by renting a lovely cottage on the Balmoral estate. The grounds, gardens and exhibitions are open to the public from April 1 through July 30.

Queen's Birthday Celebrations - London, England
The Trooping the Color is an annual event to mark the Queen's official birthday. Held every June in central London, the Trooping the Color is the biggest royal event of the year with Her Majesty the Queen always in attendance. Tickets for the parade are in short supply but if you don’t manage to snag one for yourself, just stand along The Mall, which runs from Buckingham Palace to Admiralty Arch for a great chance of spotting the Queen.

Royal Ascot - Ascot, Berkshire, England
Attend the horse races at Royal Ascot and there is always a good chance of spotting the Queen and Prince Phillip in a horse drawn carriage during the Royal procession. Dating back to 1711, these prestigious races are held annually in the third week of June. Her Majesty is known to take a keen interest in the historic Royal Ascot races and she has owned 20 winners over the years.

Holyrood Palace - Edinburgh, Scotland
Positioned at the end of Edinburgh's historic Royal Mile, Holyrood Palace is used by the Queen for one week at the beginning of each summer when she carries out a range of official engagements and ceremonies. Steeped in history and perhaps best known as the home of Mary, Queen of Scots, Holyrood Palace adds to the stunning scenery of the Royal Mile and Her Majesty has often been spotted leaving Holyrood in her car - chauffeur driven of course.

Chelsea Flower Show - London, England
As Patron of the Royal Horticultural Society, the Queen regularly attends the opening of the Chelsea Flower Show. This event is a regular fixture in the Royal calendar and Her Majesty is often accompanied by other Royals. If you are in Britain in late May, this is a great opportunity to possibly catch a glimpse of Queen Elizabeth II.

Queen's Diamond Jubilee - London, England
2012 is set to be an exciting year for Britain as host of the Summer Olympic and Paralympic Games and the Queen’s Diamond Jubilee. Celebrations for this milestone have yet to be announced but will take place in June 2012. There is guaranteed to be a hive of activity surrounding this landmark occasion and plenty of opportunities to spot the Queen, possibly accompanied by other members of the royal family.

Madame Tussauds - London, England
If all else fails there is always one place you are guaranteed to meet the Queen – and even shake her hand! Madame Tussauds, is a top London visitor attraction and just a stones throw away from Regent’s Park and the bright lights of the West End. Her Majesty can be spotted there, or at least a waxwork version of her, along with the likes of Prince Charles, Princess Diana and their two sons William and Harry. It might not be the real deal but it could be the closest you’ll get so don’t forget your camera!
Like Us
Facebook
Follow Us
Twitter
Follow us
Instagram