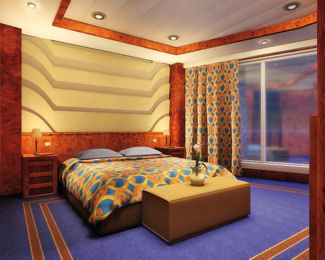 In the heyday of cruising, cruise ships offered regular staterooms and a handful of superior cabins for the very well-off. Now there are suites, mini-suites and junior suites aboard almost every ship built in the last decade.

Suites are more popular than ever, and it's not just because of size – even suites that are just slightly larger than standard balcony cabins have their merits. For example, families can enjoy roomier accommodation at a lower price point by booking a suite rather than two cabins. Also, suites often come with extra perks.

Said Carolyn Spencer Brown, editor in chief of cruise news and reviews Web site CruiseCritic.co.uk: "Suites will be more luxuriously appointed than standard cabins, but it is often the accompanying extra services and privileges that persuade people to pay more.

There may be a larger variety of suites than ever before, but there are still those that absolutely stand out from the rest. Here are the very best guest-pampering and elegant accommodations at sea, as selected by CruiseCritic.co.uk:

Yacht Club Royal Suite - MSC Cruises' Fantasia
(pictured above) This exclusive accommodation features a separate living room with a balcony. It also offers a bedroom - with floor-to-ceiling windows, instead of a balcony - that curves around the front of the ship. Yacht Club guests also have exclusive use of a private club with free food and an open bar throughout the day, plus access to a private pool area, a grill and a second bar. Expect to pay US$3,600 per person for a 7-night Mediterranean cruise.

Garden Villa Suites - Norwegian Cruise Line’s Norwegian Dawn, Star, Jewel, Pearl, Gem and Jade
These are among the roomiest of all luxury suites with a whopping 5,750 square feet of space. Features include three bedrooms, a private sunning deck, two private steam rooms and a six-person hot tub. Expect to pay US$1,785 per person per night.

Penthouse Suites - Holland America's Eurodam, Zuiderdam, Oosterdam, Westerdam and Noordam
Expansive with more than 1,300 square feet of space, each suite has a teak-lined balcony, equipped with its own hot tub and an inset banquette for alfresco lounging or dining. The suite also has a butler's pantry with a fridge and microwave and a dining table for eight. The enormous, marble-clad bathroom features a full-sized whirlpool tub and separate shower stall. Expect to pay US$680 per person per night.

Penthouse Suites - P&O's Aurora
These two elegant, front-facing duplex suites span two decks, and can be accessed from either the lower or upper deck. Both have an open, curved staircase and sleeping “loft” with full bath. In each, you’ll find dining facilities for six, downstairs guest powder rooms, and two balconies – one off the bedroom and one off the downstairs living room. The main difference between the two suites is that one features a grand piano and, the other, a library. Expect to pay £453 per person per night in the summer.

Lady Marjorie's and Sir Edward's - Sea Cloud
On this vintage sailing vessel, the suites may be a cosy 410 square feet and 366 square feet, respectively, but they more than make up for that in class. Originally owned by Marjorie Meriwether Pos and husband E.F. Hutton, they have been faithfully restored to the 1931 design with the addition of some modern conveniences. Marjorie's suite is more feminine and plush, with white walls and gold gilt wainscoting, a canopy bed and a large, elegant bath. Sir Edward's is clubby, with knotty pine panelled walls, dark furniture and an equally large bath. Expect to pay US$1,220 per person per night in either of these suites.

Grand Suites - Regent Seven Seas Cruises' Seven Seas Voyager
Regent Seven Seas' newest vessel boasts four of these spectacular suites, styled in luxurious, dark-teak cabinetry, cream-colored walls and furnishings. Featured are walk-in closets and guest baths, plus solariums off of the bedroom areas, with floor-to-ceiling windows and soaking tubs that look out over the sea. Prices start at US$1,120 per person per night.

The Owner's Suite - Silversea Cruises' Silver Whisper and Silver Shadow
The two owner's suites on each ship feature sumptuous furnishings, including warm-wood furniture, plasma-screen televisions, marble and granite baths with full-length whirlpool tubs and separate areas for toilets and bidets. There are full living rooms and dining areas and extra half-baths off of each foyer. Catered cocktail or dinner parties are included in prices, which average US$1,700 per person per night.

However, this accommodation is for those who don't mind being seen, as the terraces are visible from the public decks below. Expect to pay US$4,170 per person per night.

Penthouse Suites - Celebrity's Millennium-Class Ships (Millennium, Infinity, Summit and Constellation)
These toy-laden suites are tucked into the stern with huge private balconies and hot tubs that look out over the wake. Inside, there's about 1,100 square feet of elegant accommodation, including an enormous bathroom with a great whirlpool tub set into a bay window. The techie extras include a private fax, motorized drapes, an Internet station and VCR's and DVD players to complement the 32-inch televisions. Expect to pay US$900 per person per night.

Grand Suites - Princess Cruises' Sapphire, Diamond and Caribbean Princess
These three ships each have one exclusive hideout at the aft, with a gigantic verandah and elegant furnishings. The one-bedroom suites combine modern technology with old-world luxury: lush brocades, sumptuous bedding, a corner whirlpool tub and separate multi-jet shower, dining tables (inside for six and outside for four), a wet bar, two televisions and a personal computer. Expect to pay an average cost per person per night of US$572.
Like Us
Facebook
Follow Us
Twitter
Follow us
Instagram