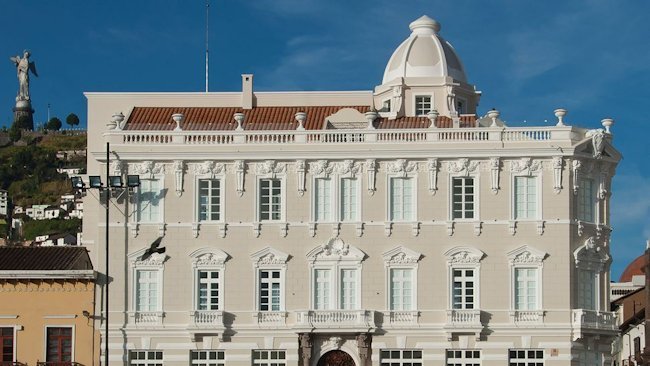 Easter is really something to see in Quito, Ecuador, and no place offers a better perspective than Casa Gangotena. The renowned boutique address in the heart of Old Town – recently named the Best Hotel in South America as well as one of the Top Ten Hotels in the World by TripAdvisor reviewers – offers unmatched views of the holiday pageantry unfolding on Plaza San Francisco as well as convenience to related events throughout the original UNESCO World Heritage Site city.

There is no holiday quite like Easter in the Ecuadorian capital, with beautiful religious artworks displayed throughout the city and locals in large numbers joining in spectacular events and traditional rituals. The view from the private terrace of Casa Gangotena, a magnificently restored neo-colonial mansion, is one guests won’t soon forget. Particularly of the Procession of Jesús del Gran Poder honoring “Jesus of the Great Power,” which unfolds on Good Friday, April 18. Expect the devotion of city faithful to completely transform the center of Old Town, with tens of thousands of passionate Catholics following a near-life-size wooden sculpture of Christ bearing the cross carved by Padre Carlos, an artist of Quito’s famed Colonial School of Religious Art, in 1620. It’s a stunning, internationally renowned spectacle mixing Hispanic, Moorish and Indo-American symbols and traditions like nowhere else in the world.

The going will be a bit more relaxed at Casa Gangotena, with the terrace decked out with comfortable chairs and tables topped with parasols to shield guests from the Equatorial sun. As per tradition celebrated by thousands across the city and millions of Ecuadorians beyond, the hotel’s culinary staff will serve fanesca, a hearty soup of milk, dried codfish, herbs and a dozen grains and legumes garnished with slices of fresh cheese, flour empanadas and thinly sliced hard boiled egg and served with mashed potato on the side.

• Palm Sunday – Jesus Christ in Jerusalem, with religious ceremonies and cultural events at squares and churches in the city’s Historic Center.
• Holy Wednesday – The Dragging of the Robe procession with communal prayer and the blessing of the True Cross at The Cathedral of Quito at La Plaza Grande.
• Holy Thursday – See seven churches, many of which are usually closed, and altars arrayed in splendor through Old Town Quito as well as the Pontifical Chrismal Mass of Oils at the Municipal Cathedral.
• Good Friday – Procession of Jesús del Gran Poder starting at the Plaza San Francisco.
• Holy Saturday – Paschal Vigil, a ceremony for the Solitude of Mary at the Temple of San Francisco.
• Holy Sunday – Resurrection with a Solemn Pontifical Mass presided over by the Archbishop of Quito at the Municipal Cathedral.