Travel Like a President to These Destinations Around the U.S. 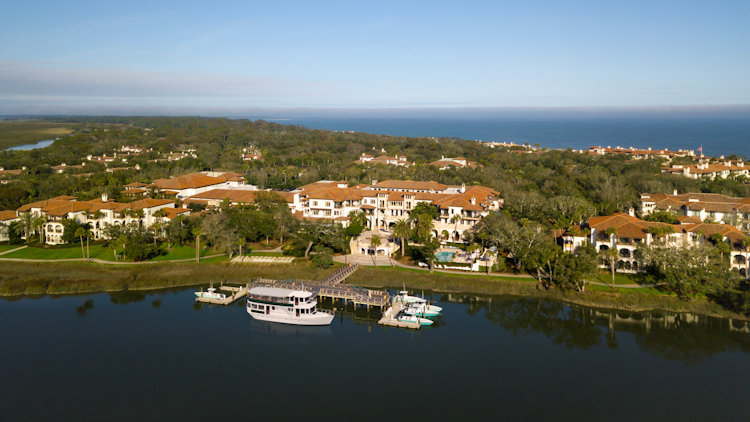 With President's Day just around the corner, we've rounded up a collection of properties and destinations famously frequented by U.S. presidents that will have any history buff (and travel enthusiast) feeling fit for the Oval Office. From the hotel that hosted the drafting of the Charter for the United Nations, to the honeymoon spot of John and Jackie Kennedy, these presidential sites are the perfect place to extend your long weekend.

In 1928, President Calvin Coolidge visited newly-opened The Cloister at Sea Island for the holidays, posing for photos as he planted a sapling. This would become the first of many commemorative live oaks -  the state tree of Georgia and the southern symbol for strength - planted at the Forbes Five-Star resort by U.S. presidents and other special visitors to The Cloister. Additional trees in Sea Island’s presidential grove commemorate the visits of Presidents Dwight Eisenhower, Gerald Ford, Jimmy Carter, George H.W. Bush (who also honeymooned at Sea Island in 1945), George W. Bush, and Bill Clinton. Visitors to Sea Island will discover the same blend of gracious Southern hospitality and beautiful, private natural setting that has drawn dignitaries from around the world and even provided the setting for the 2004 G8 Summit.

Spanning the entire eighth floor of the historic Main Building of the Fairmont San Francisco, the presidentially-frequented Penthouse Suite offers 6,000 square feet of luxury and unparalleled pedigree. The space is even rumored to have a secret passageway for sneaking in and out. As a frequent home-away-from-home for U.S. Presidents and world leaders, the suite has witnessed history-changing events and served as the meeting place for a multitude of leaders. Famous guests include John F. Kennedy and Harry Truman. The Big Four even used the space as they prepared to draft the United Nations Charter at The Fairmont in 1945.

Hotel del Coronado is an iconic and historic beachfront hotel in the city of Coronado, just across the San Diego Bay. When the property first opened in 1888, it was the single largest resort hotel in the world, subsequently hosting presidents, royalty, and celebrities throughout the years. Notable guests include Jimmy Carter, Ronald Reagan, George H. W. Bush, Bill Clinton, George W. Bush, Barack Obama and many more.

This 200-acre estate in the Palm Springs area was once the private home of the well-known Annenberg family and has hosted seven presidents for golf vacations over the years. Nixon even decided to escape off the grid to Sunnylands the very same day he was granted a presidential pardon by Gerald Ford, in 1974. This mid-century architectural gem hosts beautiful gardens and its own golf course. Even though guests can’t stay at Sunnylands themselves anymore, the property offers guided tours Thursdays through Sundays to explore the grounds and soak in the history.

This Spanish Mission-style hotel has hosted six presidents since it opened in 1903, including FDR, Taft, Hoover, Nixon, Reagan, and George W. Bush. The hotel displays an enormous chair that was fashioned just for Taft’s visit and Richard and Pat Nixon held their wedding there in 1940. There are five presidential suites in the hotel now, as well as a Presidential Lounge with signature cocktails like the JFK Cosmopolitan and the Herbert Hoover Lemon Drop.

While Santa Barbara County is home to current U.K. royalty, it’s also long been a special place for many U.S. presidents and vice presidents past and present. Visitors can book the “Kennedy Cottage” at the ultra-luxury San Ysidro Ranch, to stay in the 2,700 sq ft. retreat where John and Jackie Kennedy stayed during their honeymoon in 1953. The hand-carved stone cottage features a gated entrance with a courtyard, a massive terrace overlooking the water, outdoor rain shower and more, making for a romantic retreat that’s also rich in history. Other notable presidential moments in Santa Barbara include Bill Clinton’s 2016 speech at the Canary Hotel, Vice President Kamala Harris’s wedding at the Santa Barbara County Courthouse, and more.

The oldest continuously operating hotel west of the Mississippi, the elegant Menger Hotel is a long-rooted landmark in U.S. history. The property’s famous Menger Bar was built in 1887 as a replica of London’s House of Lords Pub. In 1898, Colonel Leonard Wood and his lieutenant-colonel (and future president of the United States), Theodore Roosevelt, set up an enlistment table at the Menger Bar where they recruited more than 1,250 men to form the Rough Riders, a volunteer regiment for the Spanish-American War. Presidents McKinley, Taft and Eisenhower are all known to have stayed at the hotel, while President Bill Clinton lauded the hotel’s mango ice cream while campaigning in 1992.

For those who want to get away for Presidents’ Day weekend, look no further than Rapid City, South Dakota! Known as the “Gateway to the Black Hills,” Rapid City is settled just a short drive from Mount Rushmore National Memorial. The city’s downtown is also home to a collection of life-sized bronze statues that make up the small town’s crown jewel, the City of Presidents. Travelers can take a walking tour to see this art installation that includes the past 44 presidents of the United States and even follow an interactive online map to find their favorite leader. Additionally, for those who really want the presidential treatment, the historic Hotel Alex Johnson has played host to six U.S. commander-in-chiefs in their Presidential Suite, which can still be booked by guests looking for an Americana weekend escape.

History buffs visiting Newport can visit Jackie Kennedy’s childhood home, Hammersmith Farm, which was also the reception venue used following her wedding to President John F. Kennedy. The two were married on September 12, 1953 at St. Mary’s Church on William Street. During JFK’s presidency, it was referred to as the “Summer White House.” Hammersmith Farm is not open to the public but can be admired from the road and the water, by those interested in sailing the Newport Harbor.

Once an active U.S. Navy and U.S. Army Base, Fort Adams State Park  offers an exceptional panoramic view of both Newport Harbor. The Fort was named after John Adams, second President of the United States who authorized its construction. Also located at Fort Adams State Park is the once summer White House of President Dwight D. Eisenhower. Fort Adams is open to the public and a popular attraction for visitors interested in learning history as well as those wanting to relax with a picnic or sail on the Narragansett Bay.

A stunning property that has hosted many U.S. Presidents throughout its storied history – has introduced their “Presidential Treatment Package,” allowing guests the opportunity to experience the luxurious surroundings of Wilmington and incredible food at the property’s award-winning restaurant, Le Cavalier. The Presidential Treatment Package is bookable now for stays beginning Tuesday, 2/15. It is not available on Sundays. As an added bonus, guests who travel to Wilmington via Amtrak can show their ticket receipt upon arrival at the hotel and receive a free upgrade to next best room type, based on availability at time of check-in. The package includes: Complimentary valet parking, Overnight accommodations, Complimentary in-room treat of vanilla chocolate chip ice cream, and an elegant 3-course menu for two at Le Cavalier at the Green Room. Dinner Menu HERE.

The hotel has hosted former presidents including Calvin Coolidge, Warren G Harding, Woodrow Wilson and George H.W. Bush. For those to treat themselves like a President after an adventurous day outside, Omni Hotel Mount Washington’s 25,000 square foot mountain spa brings the outdoors inside to treatment rooms with sweeping views of Mount Washington, the Presidential Mountain Range and Crawford Notch. Signature treatments feature custom Mountain Mist products rich with traditional New England botanicals that have been used for centuries to soothe muscles, smooth and protect the skin and reduce inflammation.