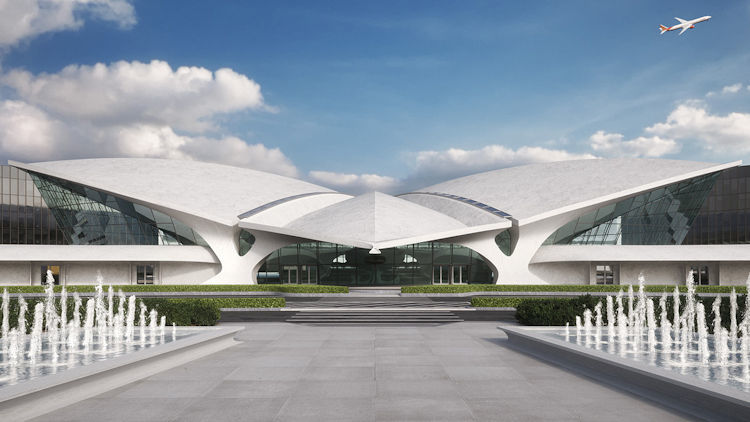 Eero Saarinen, the prolific designer of the 1962 former TWA terminal under restoration by MCR/MORSE Development as the TWA Hotel, once described his building as “a place of movement.” It’s even more true today: Quadruple the size of the world’s biggest hotel gyms, the TWA Hotel’s progressive, functional performance-based fitness center will offer TWF’s signature mix of futuristic and best-of-the-past equipment, including strength-trainers (sandbags, kettlebells, TRX) and conditioning machines (rowers, treadmills, ellipticals).

Offering day passes and monthly membership, the fitness center is free for TWA Hotel guests and open 24/7. You can strike a pose in the yoga studio, secure a personal trainer — or just show up for one of the heart-pumping cycling sessions on the packed schedule of classes.

Afterward, cool down with nutritious, rejuvenating snacks and juices at the on-site galley. Need to catch a flight? No sweat. Freshen up in the locker rooms outfitted with up to eight showers and fully-stocked, salon-style vanities (think hairdryers and custom TWA Hotel grooming products).

The TWA Hotel, JFK Airport’s only on-airport hotel, will feature:

• Six restaurants, including The Paris Café, and eight bars, including The Sunken Lounge
• An Intelligentsia coffeebar and coffee carts throughout the hotel grounds
• High-end retail outlets
• 50,000 square feet of event space, including a 15,000-square-foot ballroom
• A rooftop pool and observation deck
• A Lockheed Constellation “Connie” L-1649A transformed into a cocktail lounge

For more information on the TWA Hotel, please visit twahotel.com.